LIVE RADAR: Track storms, rain around the Valley
EntertainmentThings To Do 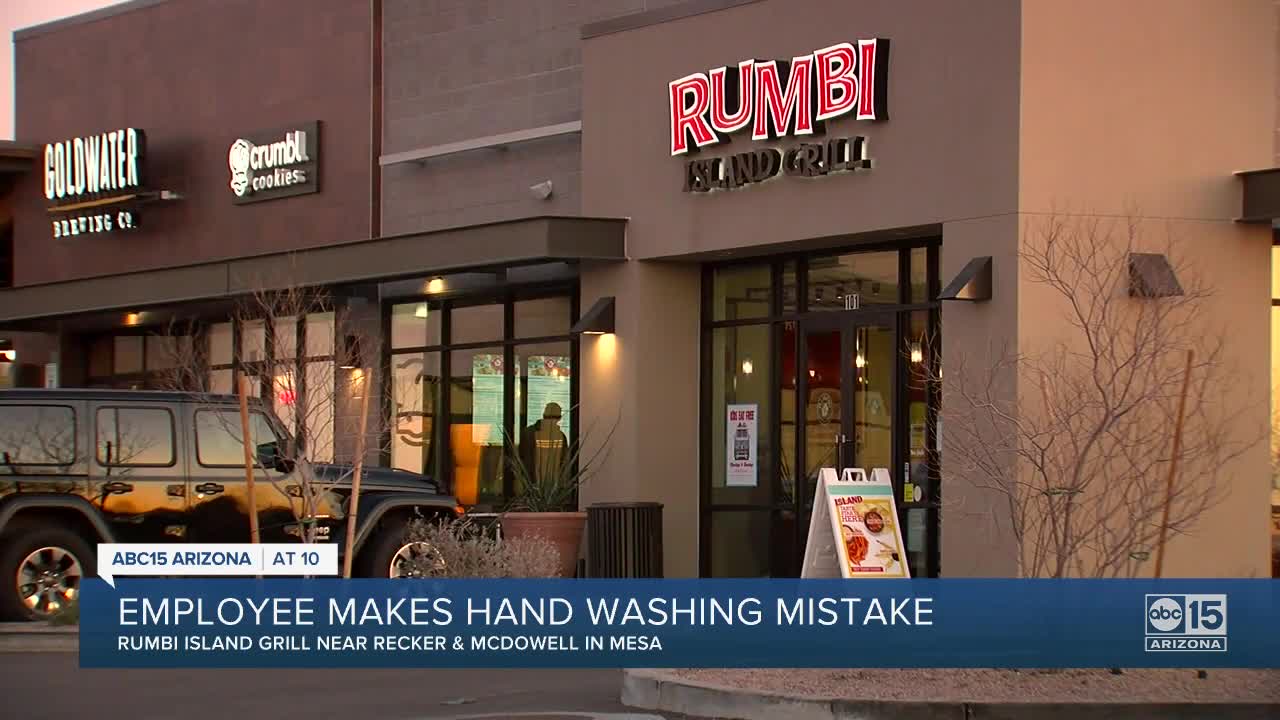 Valley businesses come up short on inspections in January, 2020. 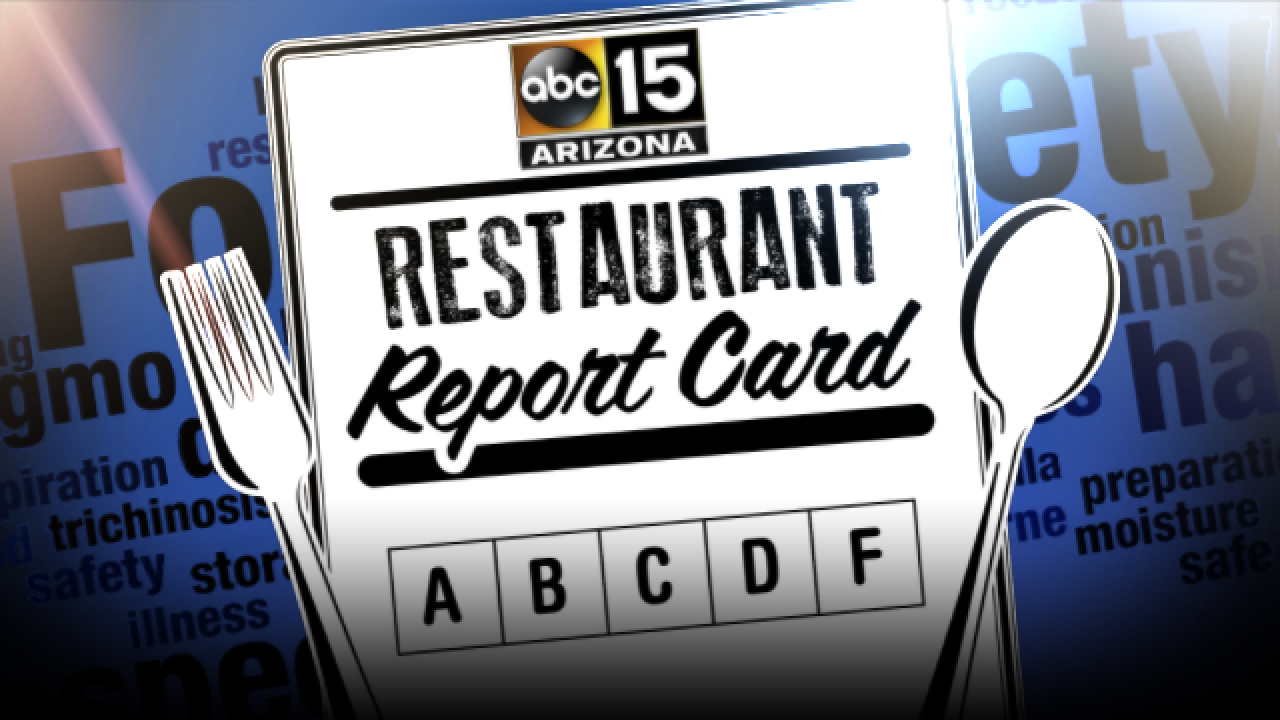 PHOENIX — On the first Tuesday of every month, ABC15 takes action to share restaurant report cards from around the Valley. In January, 14 restaurants or food establishments failed to receive a "C" or better on their health inspections.

Most violations were corrected at the time the violation was observed, according to the reports.

Violations: Coffee, cream, and ice dispensers contained accumulation of respective residue on and around dispensers at time of inspection; package of open hotdogs in walk-in cooler had date mark of 12/20/19. Two other open hot dogs had no date mark and had been in cooler for unknown amount of time and were pulled from cooler and placed on embargo/recommended for discard during inspection; Wall damage at floor/wall juncture across from computers and adjacent/on other side of hot water heater. Repair wall by next routine inspection.

Violations: Observed an employee handle raw animal proteins, remove their gloves, and then wash their hands for approximately 8 seconds; Several open metal pans of raw shelled eggs were stored on a wire shelf directly above ready to eat leafy greens in a reach-in fridge; Observed several pans of cooked potatoes stored out of temperature control with internal temperatures between 118-131. The PIC stated that the potatoes had been prepared less than one hour prior and had been stored out of temperature control due to one of the establishment's salamander breaking down.

Violations: At time of inspection the dishwasher was observed handling dirty dishes then directly putting away clean sanitized dishes without first washing their hands; two containers of tomatoes located near the back storage area were found to contain moldy tomatoes; At time of inspection an employee was observed dipping dirty dishes into quaternary ammonium sanitizer for 3 seconds before putting them away to air dry. The establishment uses dishes interchangeably between catering and the regular restaurant. PIC was advised that contact time for quaternary ammonium sanitizer is a minimum of 30 seconds in order to ensure a sanitized surface.

Violations: Observed a large butcher knife used to chop cooked meats and grilled whole chicken with a broken handle., observed employee at the bakery touch a loaf of bread with their bare hands which was going to be finished off with margarine and sugar and set out for sale; observed no paper towel holder or dispenser at the outdoor cooking station.

Violations: Observed a knife stored in a green container with visible food debris on the blade. Per PIC, this same knife has been used all day (since opening). The green container holds Quat sanitizer which the employees used to dip the knifes (sic) in in between use. Discussed with PIC that the knife must be properly washed, rinsed, and sanitized every four hours; Observed PIC dip a knife in Quat sanitizer, and then store the knife in a container next to the sanitizer. That same knife was then used again to cut a customers sandwich before the knife was completely air dried. PIC removed the sanitizer container from the line, and grabbed a new knife.

Violations: Observed used water bottles stored on top of the prep table. Water bottles were discarded; Observed cabbage shredder with an accumulation of cabbage dried on the blade and inside of the machine. Per PIC, the shredder had not been used today; observed a lighter stored above a food prep area. The lighter was moved to a location away from food prep areas.

Violations: Observed an employee handle raw chicken, remove gloves and proceed to touch handle to remove cooked chicken. Then employee donned new gloves to handle raw chicken; Observed the hand sink next to the 3 compartment sink blocked by boxes/supplies from a delivery. PIC removed boxes to create a path to the hand sink; Observed boxes containing raw chicken stacked directly on top of boxes of battered fries. PIC relocated the boxes of raw chicken; Observed 6 empty plastic containers stored in the hot holding unit. The temperature of the plastic containers was below 135'F. The containers contained particles of cooked chicken.

Violations: Observed employee at the register taking orders, then proceeding to scoop ice with a cup and handing it to the customer. Discussed using a scoop when scooping ice into cups and hand washing in between a change of tasks to prevent contamination; Observed uncovered, cooked rice on the counter in a container near the walk in freezer at 87F that had been cooked at 10:28am. PIC discarded the rice; Observed fried chicken at 105-150F in the hot holding unit near the front registers. The temperatures varied, with the chicken on the outsides of the unit being cooler in temperature. Per PIC, the chicken was fried a half hour prior. PIC voluntarily discarded the chicken.

Violations: Observed employee handle raw shrimp, remove gloves then put on a new set of gloves to begin prepping food without first washing hands; observed chopped romaine lettuce and beans in top portion of prep table at 46-48*F. PIC stated items had been in prep table for less than two hours and were moved to walk-in cooler to cool down; observed several chemicals stored above single service cups near cash register. PIC moved chemicals at time of inspection.

Violations: Test strips for quat sanitizer were bleached whited and unusable. No other test strips were available in the deli department. PIC retrieved useable quat test strips from the main office; observed build-up of liquid on the floor by the raw rotisserie chickens in the walk-in cooler. Please clean and sanitize and maintain clean.

Violations: Observed no soap at the hand sink next to the 3 compartment sink. The battery was replaced at the time of inspection to provide soap; observed raw packages of filet Mignon and raw marinated steak in the walk-in stored above raw fish. These items were moved below the fish; Observed the low temperature dishwasher with a chlorine concentration below 10 ppm. The dishwasher was ran several more times and still produced the same concentration. The Chlorine concentration of the low temperature dishwasher must be between 50-100 ppm; Observed no dates for cooked pork, and chicken. Per employee these items were cooked on Saturday. Observed pepperoni with a date of 1/13. Per PIC, this date is incorrect since the pepperoni was frozen during this time. PIC discarded the pepperoni. PIC dated these items at the time of inspection.

No restaurants in the West Valley inspected during January failed their health inspections.