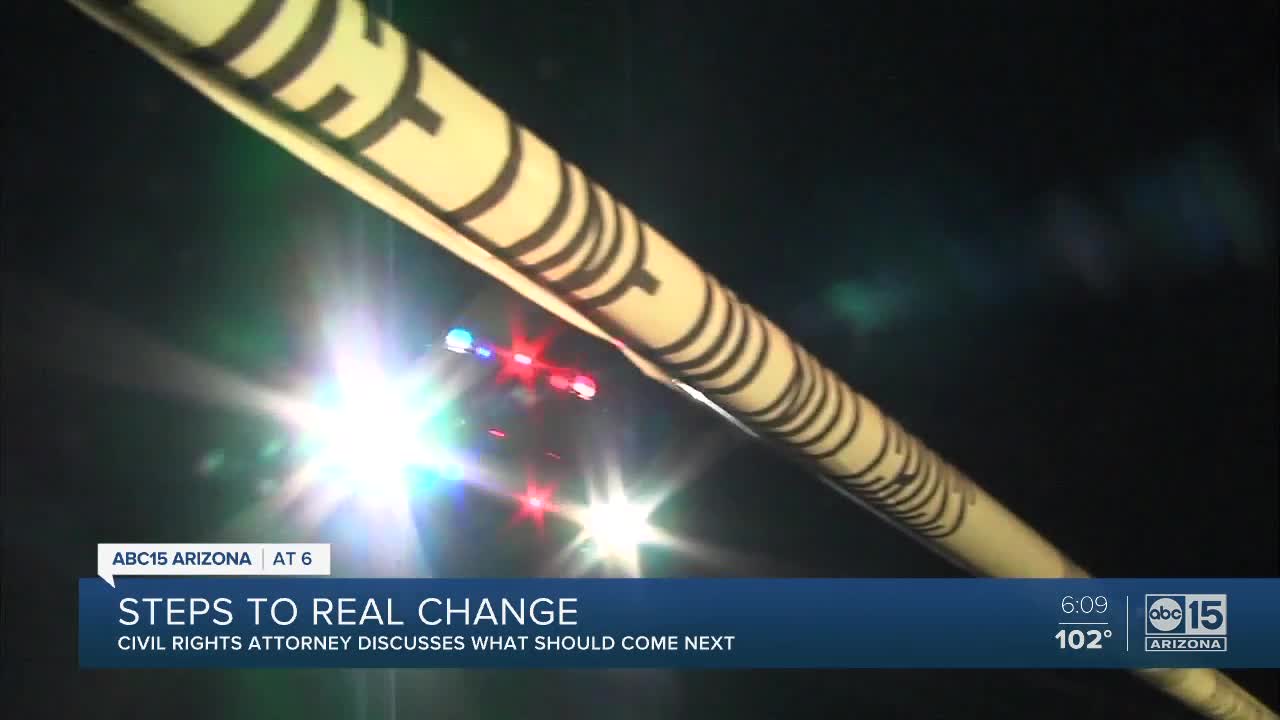 Civil rights attorney talks about what needs to come next to produce real change.

PHOENIX, AZ — The death of George Floyd in Minnesota may have been the catalyst for several days of protests in Phoenix, but anger and frustration about police use of force and lack of transparency, has been boiling over within African American and Latino communities in Arizona for years.

In 2019 alone, a 14-year-old burglary suspect Antonio Arce shot in the back by a Tempe Police officer as he ran away. And Phoenix police officers were caught on camera sweeping a handcuffed man's legs and pointing a gun at a car with his children inside.

People picked sides about who was right and who was wrong. Meetings were held. But eventually most people went back to their lives without any real change according to civil rights attorney Benjamin Taylor.

He's represented several families in use of force incidents and says he's hoping after these protests police agencies will take steps to increase transparency and accountability.

Specifically he advocates for use of independent investigators and civilian review boards for incidents.

Taylor says that would make the justice system more fair because many excessive use of force investigations are handed off to neighboring agencies.

City of Phoenix is one of the few cities that approved a civilian oversight board in February after months of heated debate. It has not yet been implemented.

He also says it's past time for the legislature and the Governor to get involved by mandating that body cameras be worn on all law enforcement statewide.

"In these types of cases when the person is dead or killed you don’t have any other witnesses. It's officers word against nobody else," he said. "And the officer gets free reign to be able to speak and describe what happened."

Video is something that could help explain what happened in the Memorial Day shooting of 28 year-old Dion Johnson. He was found sleeping in his car which DPS says was partially blocking traffic on the Loop 101 near Tatum Boulevard when the agency says there was a "struggle" causing the trooper to shoot him. ABC15 has learned body camera video does not exist because the DPS motorcycle troopers are not outfitted with them.

Taylor is also calling on lawmakers to require that video and incident reports be made available faster. It's a process that he says right now often takes weeks, months or even a lawsuit to expedite.

"That would help with transparency in the community and trust. When you have families who are victims of police brutality they want answers," he said.

Partially because police enjoy qualified immunity which prevents prosecution in most cases but also because Taylor says police union support may incentivize elected officials not to.

"There’s a political aspect, there’s a financial aspect. And when you have a police union giving a lot of money to a prosecutor and government officials they might not be strong to go up against police brutality," Taylor said.

Ultimately he says the people being policed need a seat at the table or it's only a matter of time before the next case sparks widespread protests all over again.

"There’s a lot of protesters out there who are not violent who are doing the right things were protesting peacefully who want the real solutions and their voices are being heard."