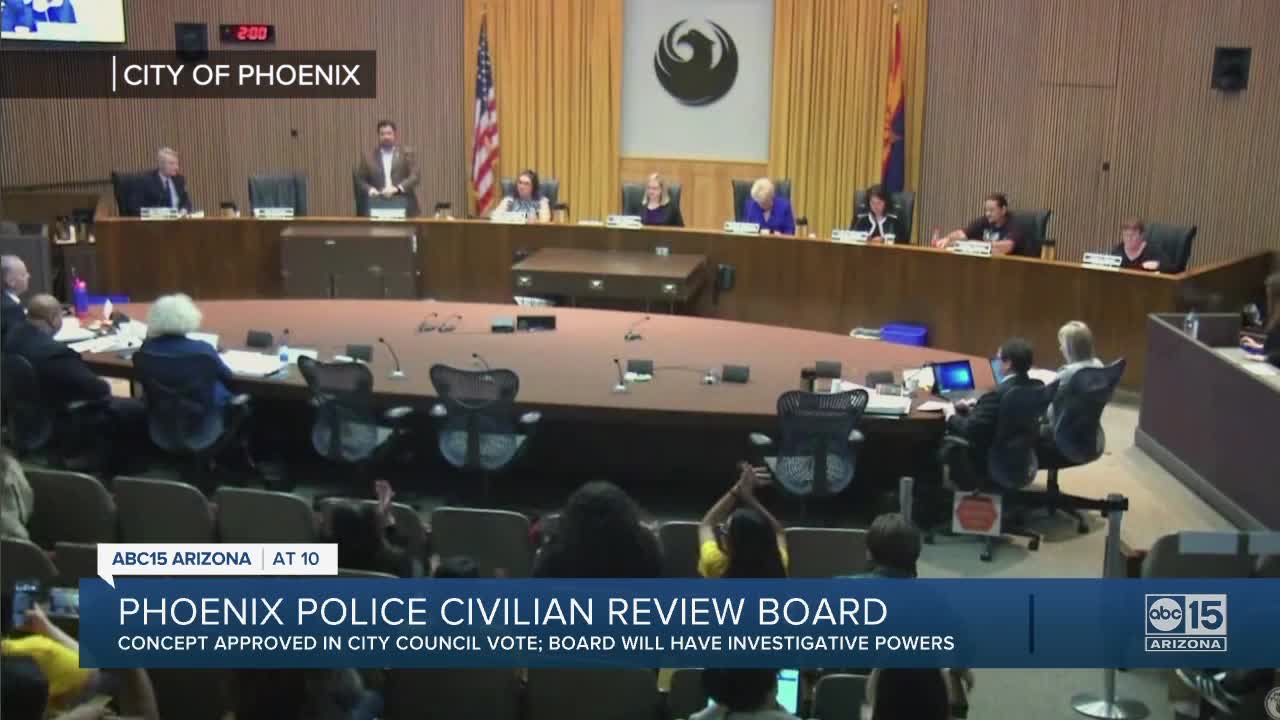 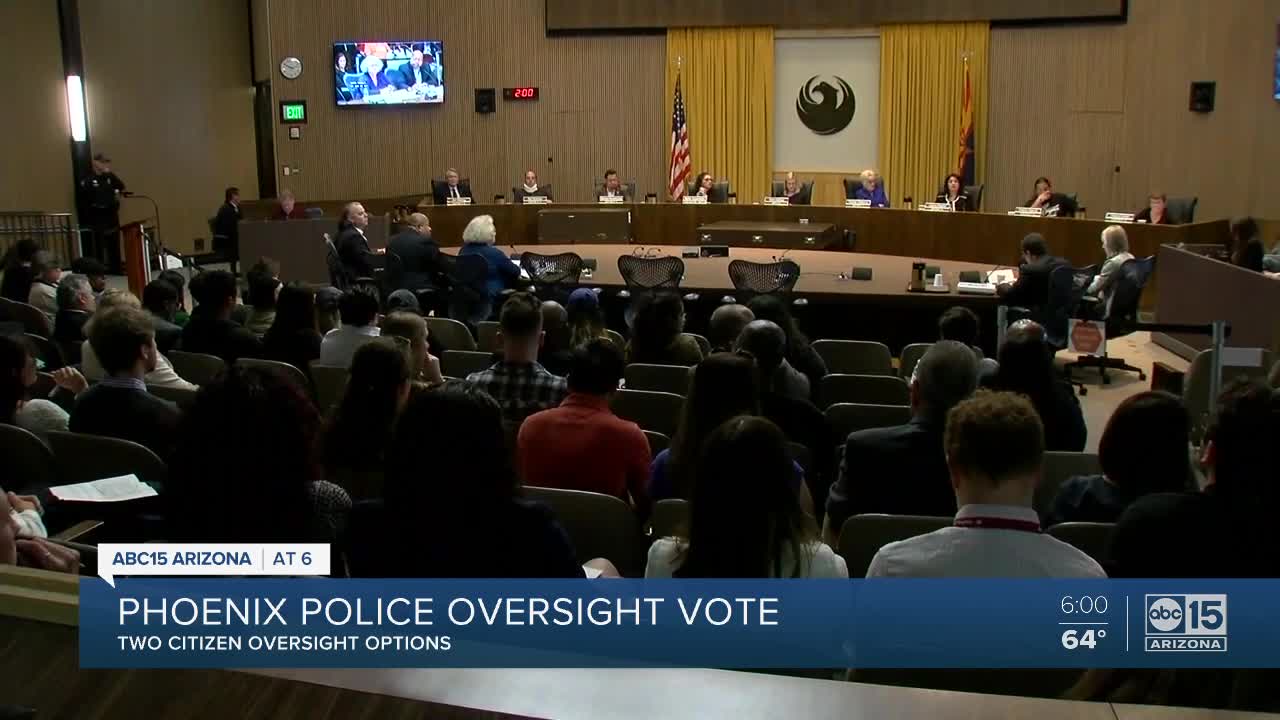 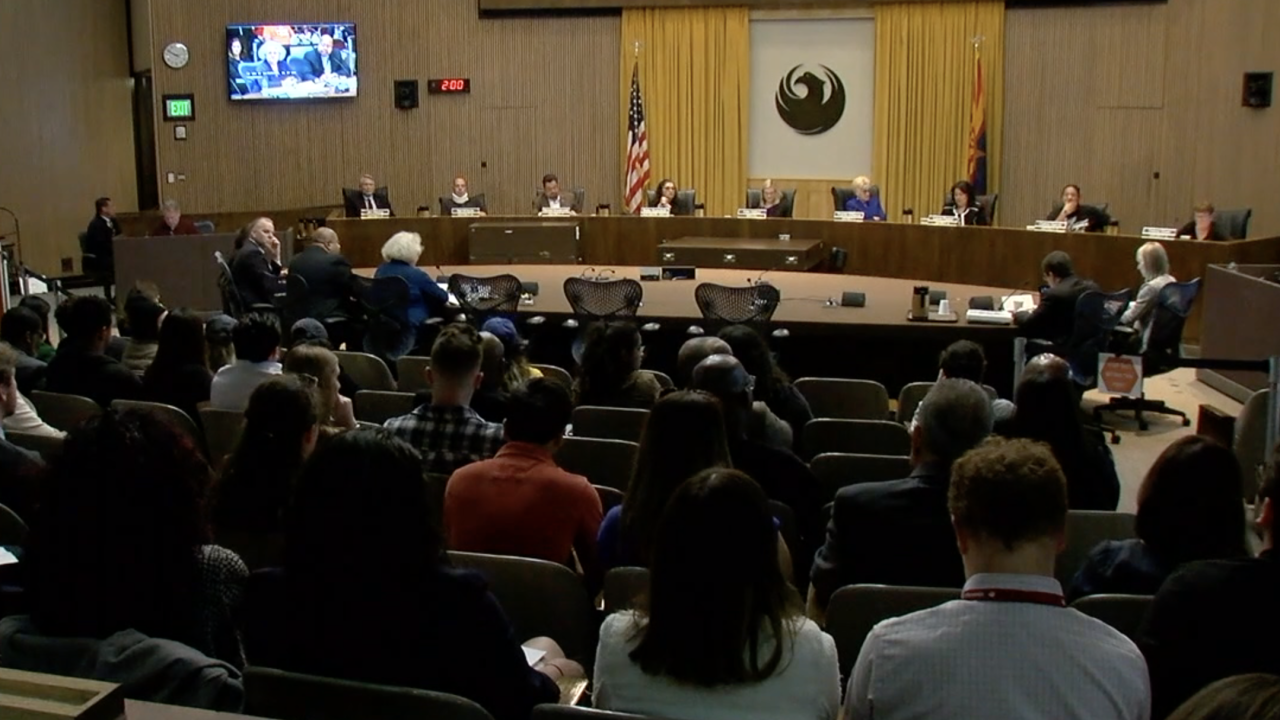 By a 5-4 vote, the council approved the "Office of Accountability and Transparency" proposal championed by Councilmember Carlos Garcia. OAT will become a new city department, separate from the police department, which will include both a community review board and a unit dedicated to monitoring and investigating police complaints.

The vote came after a heated public comment period at Tuesday night's meeting. Many community members spoke out against 'Model A,' which was a proposal by Mayor Kate Gallego that was more moderate when compared to Garcia's model.

After her plan was lambasted for hours, and it appeared neither plan would pass, Gallego made the decision to support Garcia's proposal but said, "I do have concerns with the implementation of Model B."

“I'm really excited that the community came out and their testimony definitely made a difference. People were telling their stories and those of us on the council listened,” said Councilman Carlos Garcia.

“I'm grateful for the mayor and that she made this shift. And the big thing now is going to be implementation and [to] make sure that we get this done right.”

Phoenix police unions spoke out against the concept of the Civilian Oversight Board over the past year and said they are still skeptical about the board’s power and potential agenda.

“You never buy the first model of a car, right? Something always goes wrong and there’s always something to work out,” said Britt London, President of the Phoenix Law Enforcement Association.

Other conservative-leaning members of the council also expressed their vote to reject both boards and framed the debate as being pro or anti law enforcement.

"To the officers, I know you got an extremely tough job. I, personally, don't want to add to your burdens, which I think this will today," said Councilman Jim Waring.

OAT will intake complaints about police and will have a role in investigating those complaints. When the Phoenix Police Department opens a professional standards investigation for alleged misconduct, OAT will conduct a parallel investigation, including questioning officers and witnesses. Both the internal and OAT investigators will provide reports with disciplinary recommendations directly to the police chief.

"It’s a big deal to have investigative powers," Garcia said. "We need the ability to make sure that an independent investigator is in the room and through the process and does their own reporting of each individual case along with advising policy."

The community review board will review and recommend police policy changes, hold community forums for feedback, and review some completed professional standards investigations and officer discipline.

Discussions for civilian oversight ramped up last summer after officers investigating a shoplifting case were accused of excessive force against a young, black family. The police department was already dealing with backlash after a sharp increase in officer-involved shootings.

A second option, dubbed an ombudsman model, was proposed by Phoenix Mayor Kate Gallego. That plan was criticized by dozens of community members at the meeting. They say it fell short because it lacked independence and full investigatory authority.

Gallego had said her ombudsman plan had "multiple voices incorporated," but when she could not muster enough council votes, she shifted her support to the OAT model.

"I think our duty is to implement good, sound policy that will help bring positive change for all residents we serve and last beyond our own tenure on the council," Gallego said to kick off the meeting Tuesday.

DiCicco said police officers aren't bad, they just had "one bad year." He was referring to 2018 when Phoenix had more officer-involved shootings than any city in the country.

"I can say right now that the Phoenix Law Enforcement Association cannot support any model that does not show how the entire Phoenix community, which includes police officers, benefits," said PLEA president Michael "Britt" London.

"This plan is actually designed to create conflicts between the department's investigations and a parallel investigation conducted by investigators that will not have the experience and training the members of the department have," said Ben Leuschner of the Phoenix Police Sergeants and Lieutenants Association.