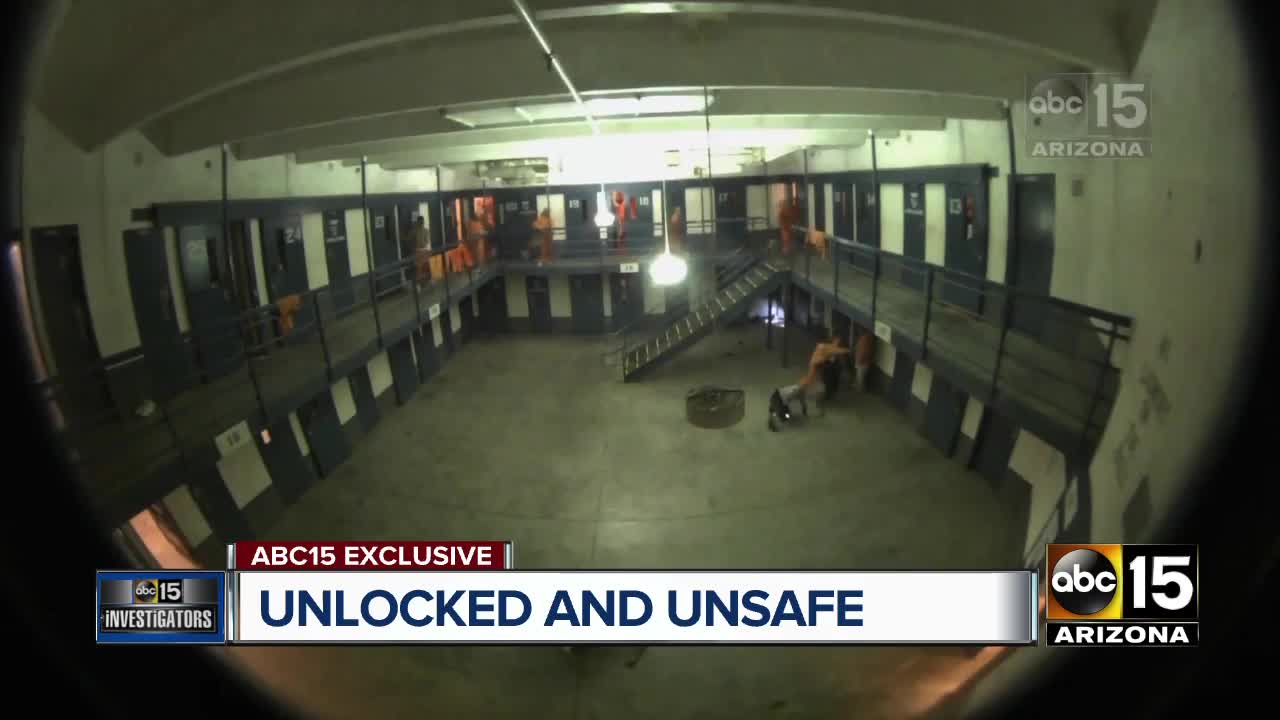 Many staff members and union leaders say the situation regarding unlocked doors at a Valley prison are worse than prison leaders claim.

Governor Doug Ducey is standing by Arizona’s corrections director the day after an ABC15 investigation exposed how many cell door locks inside a Valley prison have been broken for years, leading to serious assaults against officers and at least one inmate’s death.

His verbal vote of support comes as democratic lawmakers and the ACLU of Arizona call for Arizona Department of Corrections Director Charles Ryan to resign or be fired.

“I just want to say that at this time, I’m supportive of Director Ryan and we’re digging to get to the bottom of what the facts are,” Ducey told ABC15 after a public event.

When Ducey was asked for his reaction to the leaked videos from inside Lewis Prison, he said, “I don’t have any further comment.”

Insiders said he arrived with other top administrators and also had a videographer and a team of maintenance workers. They were placing padlocks on cells doors, sources said.

The visit raised concern and outrage from the Arizona Correctional Peace Officers Association, which then sent a scathing letter to the state legislature. Read their full letter below.

It states that Ryan’s temporary fixes have failed, and said there were two critical incidents earlier this week because of broken cell door locks.

“We don’t know what Director Ryan hopes to prove with today’s dog and pony show. We don’t need some contrived video,” the letter wrote. “If Director Ryan were a straight shooter, we would release the video from Morey Unit made on Monday (April 22) at 8:13 PM where 40 cell doors were opened and 30 inmates refused to lock down requiring officers to intervene. Or the video made two hours later at 10:24PM when an officer was assaulted in the Buckley unit by inmates who were out of their cells.”

Those units – Morey, Rast, and Buckley – house inmates with a level four classification. That’s their risk-level on a one-to-five scale.

The door locks have been broken for at least five years, according to a lawsuit and multiple officers.

In response to ABC15’s report, Rep. Reginald Bolding, D-Phoenix, said Ryan has consistently put inmates and officers in danger with his mismanagement of the department.

“It’s time for Director Ryan to resign or be fired by the Governor’s Office,” he said.

“The failures of Arizona’s prisons rest on the shoulders of Gov. Ducey, who has for years ignored chaos, suffering, and avoidable deaths in Arizona prisons. The governor has allowed millions of taxpayer dollars to be spent fighting and ignoring court orders and denying the existence of the prisons’ inhumane conditions, rather than focusing on fixing the problems. For the more than $1 billion Arizonans spend on prisons each year, we should have safe facilities, conditions that meet Constitutional minimums, and effective rehabilitative practices in place.”

Hours before ABC15’s investigation, a corrections department spokesman sent ABC15 a statement saying that Ryan first learned of the door lock problem in May 2018 and took immediate action.

The department also disputes that the door locks are broken. Instead, a spokesperson said inmates insert small objects in a way that allowed doors to close and show a positive lock in the control room.

But multiple staff members in the units and union leaders said that's not true – many cell door locks don’t work at all.

The department’s statement also said that by placing metal pins and/or padlocks on the cell doors they have significantly reduced the problems.

But six surveillance videos obtained by ABC15 show violent attacks that occurred after May 2018. Months of security inspection logs also show dozens of pins and padlocks have been broken and gone missing.

Governor Ducey declined to comment about whether he directed Ryan to go out to Lewis Prison Friday.

In an email, a corrections spokesman sent the following statement about Ryan's visit.

Director Ryan conducted an on-site visit of close custody units at ASPC-Lewis today to personally inspect the conditions including issues with cell doors not locking due to tampering by inmates. Director Ryan observed that measures taken since January, including adding new locks to doors, have been effective at reducing the occurrence of inmates tampering with doors. As further steps to address inmate tampering, the Department will be adding additional locks to all close custody cells at the Lewis prison until upgraded doors and/or locking mechanisms can be purchased and installed. The Department also is engaging in re-training of staff and reinforcement of current procedures in place to prevent door tampering.

Officers said the locks cited in the statement are not new cell door locks. They are padlocks placed outside of the doors.