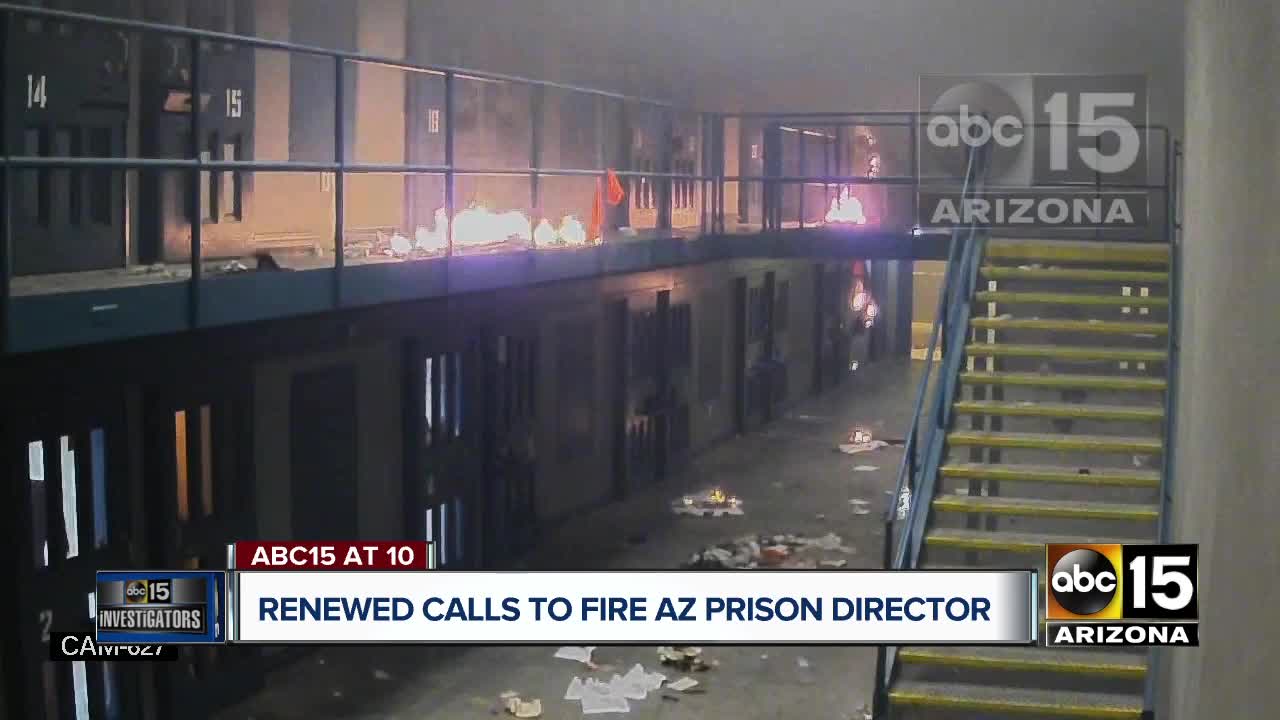 There are renewed calls to fire the Director of Arizona Prisons.

Advocates, attorneys, and officers are increasingly directing pressure at Ducey to remove Ryan.

“We implore Governor Ducey to take immediate action to remove Charles Ryan as Corrections Director and initiate a public search for a new Director, incorporating feedback and participation from key stakeholders, including those directly impacted by the prison system,” according to a statement from the American Friends Service Committee (AFSC), which advocates for criminal justice reform.

The statement comes the day after ABC15 exposed video from inside a maximum security unit in Lewis prison that shows inmates repeatedly setting fires outside of their cells as officers watch it unfold with little or no intervention.

Sources told ABC15, top prison officials told officers to stand down in an attempt to avoid calling a critical incident, which is reported up the chain of command to the director’s office.

The prison’s warden and deputy warden resigned and retired the day of ABC15’s report.

In a statement, a spokesperson for the Arizona Department of Corrections called the incident a “dereliction of leadership and inconsistent with expectations.”

The statement said official reporting from the incident was “incomplete and inaccurate, clearly downplaying the severity and scope of the incident.”

The department also said that Director Charles Ryan did not see video of the incident until May 30th.

“It is inconceivable that ADC leadership was unaware of the fire and Lewis officers’ failure to respond quickly to this emergency,” said attorney Corene Kendrick, of the Prison Law Office. “If they truly did not know, then Director Ryan and his team are not engaged as leaders. And if they did know about it, and took no action to investigate until the story broke, it shows that they condoned the officers’ behavior.”

The report on the fire video continues a damning series of reports that have exposed a deeply broken culture normalizing significant safety risks inside Lewis Prison. It also happened at the same time when officers were struggling to maintain control in multiple other units where many cells didn’t properly lock.

On April 25, ABC15 broke a story proving that many cells doors inside Lewis prison don’t properly lock – and haven’t for years.

Director Ryan said he was not aware the problem was as serious as it was. There was an immediate and vocal call for the director’s job.

In response, the governor promised to get to the bottom of the scandal in the days after.

“I have an expectation. That expectation, from what I saw with this reporting, is not being met,” Ducey said on May 3. “So we are going to understand what's there, and we are going to get to the bottom of it. But that's all I want to say regarding personnel at this time.”

Ducey also ordered an outside investigation to be led by two retired state supreme court justices. But that investigation is in its infancy.

And troubling new information about the prison system continues to emerge on almost daily basis.

In a statement after the fire video, the Governor’s Officer released the following statement.

“It's clear from this video that this incident was extremely mishandled. The obvious disregard for safety and lackadaisical response is inexcusable. Because of that, effective today, administrators who oversaw Lewis Prison at the time of the incident are no longer with the state. The Department of Corrections is reviewing if further disciplinary action is warranted. Since we became aware of the severity of issues at Lewis prison, we've taken swift action to ensure the safety and security of officers and inmates first and foremost while working to identify a long-term solution to fix locks as soon as possible. That's where our highest focus remains. We established the law enforcement and management team to support the Department in those efforts and they continue to do so. We've also initiated an independent review by former Supreme Court Justices Rebecca Berch and Ruth McGregor to get all the facts and ensure this never happens again. The investigation is in progress. We will continue to do what's necessary to ensure the safety of officers and inmates and provide for accountability as more facts are brought to light.”