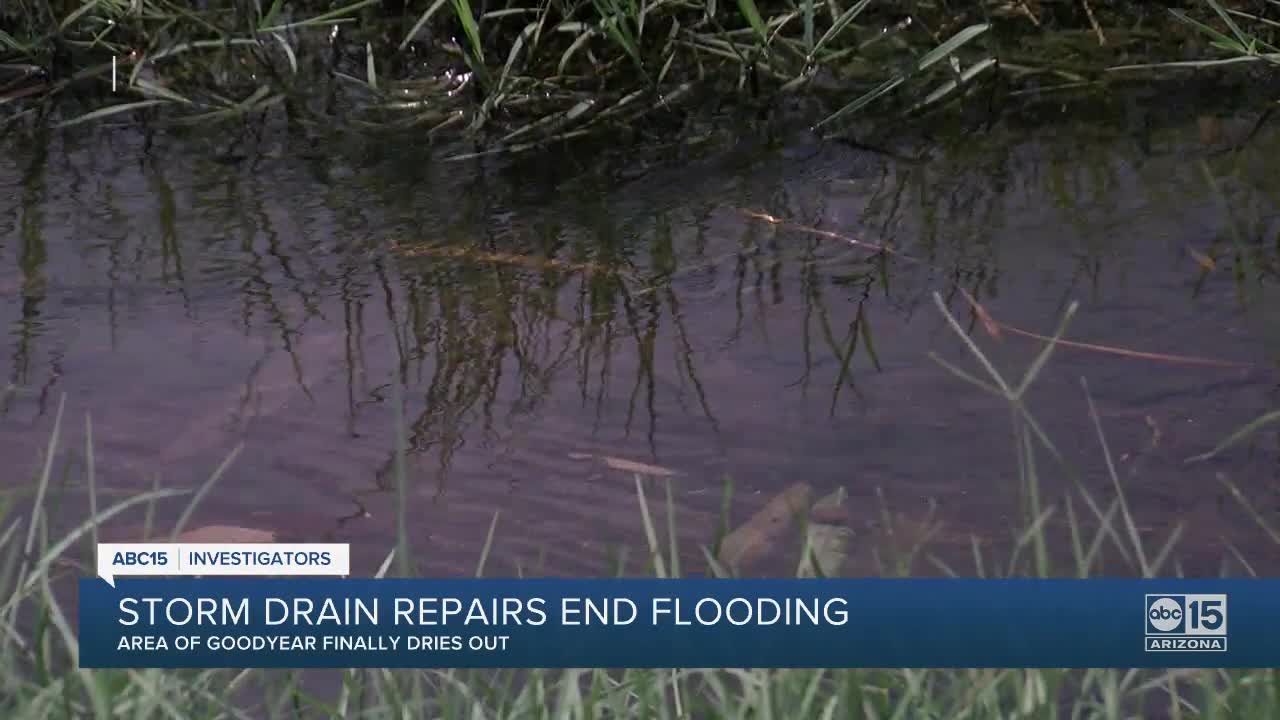 Goodyear's Bullard Wash has finally dried out after emergency repairs to an underground drainage pipe, ending a mystery about "wasted water." 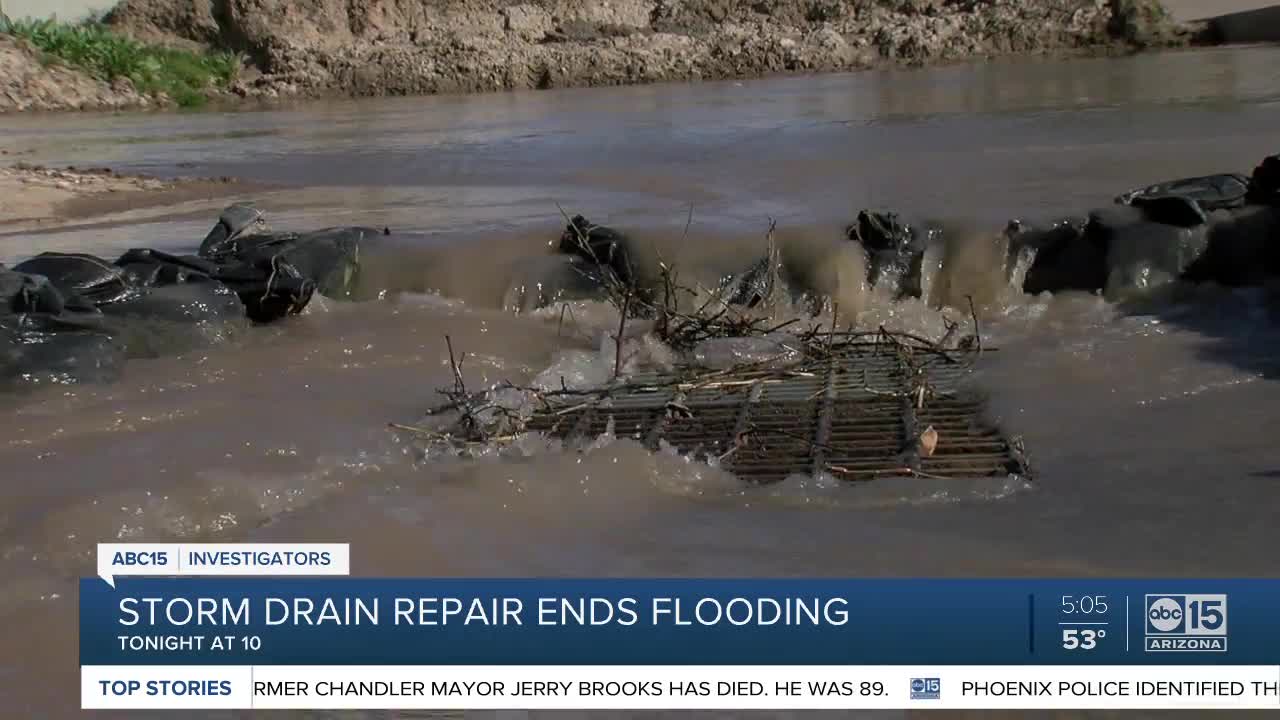 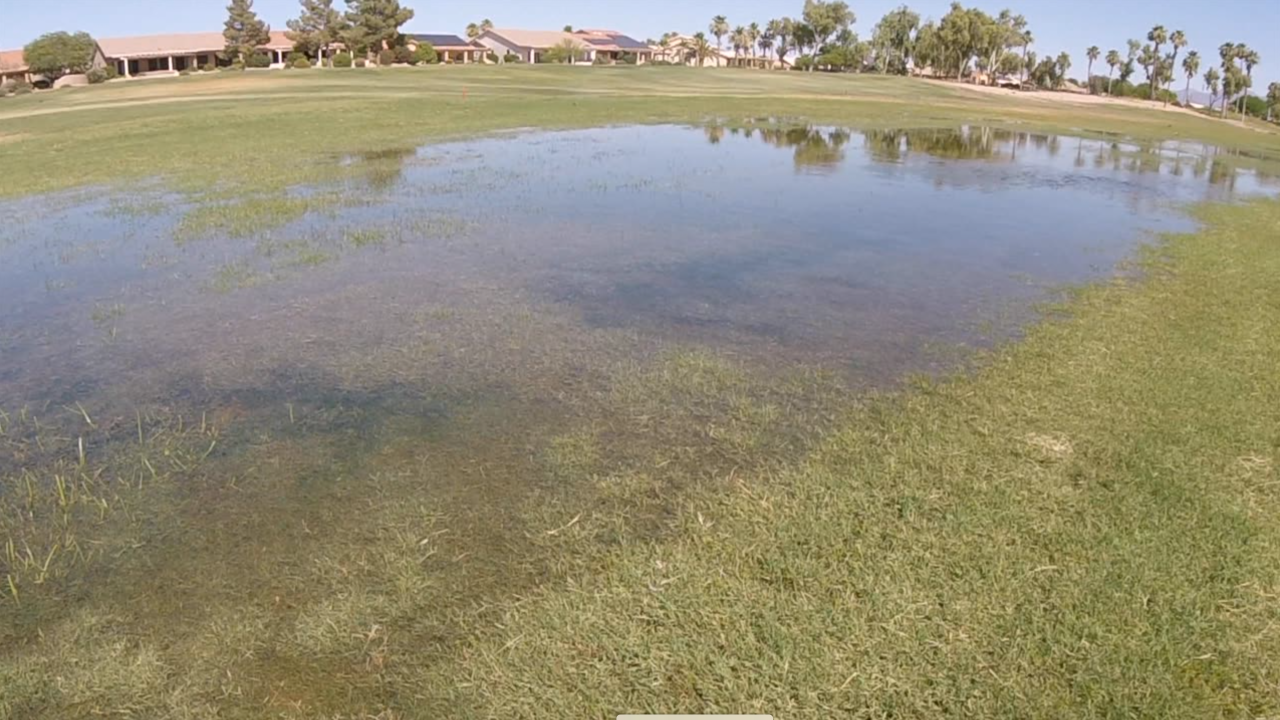 GOODYEAR, AZ — Goodyear's Bullard Wash has finally dried out after emergency repairs to an underground drainage pipe, ending a mystery about "wasted water."

The ABC15 Investigators have been reporting on the sources of the standing water, the associated health hazards, and the city's response since last summer.

"It had to be easily two or three feet high," said Janet Kirshbaum as she demonstrated the water level from last July. Bullard Wash runs behind her home in PebbleCreek, a luxury retirement community.

Both Goodyear residents and city leaders had blamed tailwater, agricultural runoff from nearby fields, for the swampy conditions, but no one could explain why the water flows were becoming bigger and more frequent.

The city even commissioned a study in 2018 hoping to find answers, but residents say the water flows only got worse until July 2019.

"Everybody was skirting around the issue," Kirshbaum said. She considered the heavy flows of tailwater "wasted" water, especially in the desert.

Meantime, retirees were slipping on slimy sidewalks and getting hurt. Roads inside PebbleCreek were sometimes impassible due to high water. Swarms of mosquitoes were becoming unbearable, and ABC15 even interviewed one neighbor who contracted West Nile Virus.

"That's why we came to you," Kirshbaum told the ABC15 Investigators.

After ABC15 aired its initial story in August, Goodyear city officials admitted they found damage in a pipeline, which carried agricultural tailwater and stormwater under Bullard Wash. City crews even blocked the pipeline entirely to inspect it in July, and they apologized for failing to tell residents about the work as the water levels rose.

In September, the Goodyear City crews began emergency storm pipe repairs under Bullard Wash. They fixed an 80-percent blockage in one section of the pipe. Over the years, roots had also grown into the pipe, causing obstructions.

"We went ahead and replaced the broken sections of the pipe," said Goodyear's Deputy City Engineer Sumeet Mohan. "In addition, we hydro-jetted, which is high-power cleaning of all the roots." They also installed signs warning about possible flooding in the wash.

ABC15 asked Mohan why it took months, if not years, to discover the damaged drainage pipe. He explained that Goodyear, as a small but quickly growing city, was not conducting inspections of its stormwater systems. He said a regular inspection program will begin soon.

"We will evaluate with closed-circuit television the storm drains to make sure that every few years we are able to assess the condition of the pipe," Mohan said.

Right now, Bullard Wash is dry, unless it rains, Neighbors are cautiously optimistic, but they say the real test will come next summer when nearby fields need the most irrigation water.

Residents like Janet Kirshbaum still worry local farmers could be wasting water. While tailwater may still occasionally run through the grassy swale behind her home, she is relieved the major health and safety issues seem to be over.

"Thank you for everything you've done, Melissa," she said. "You've been wonderful to take this problem, which is big to us and small to so many others, and we really appreciate it."