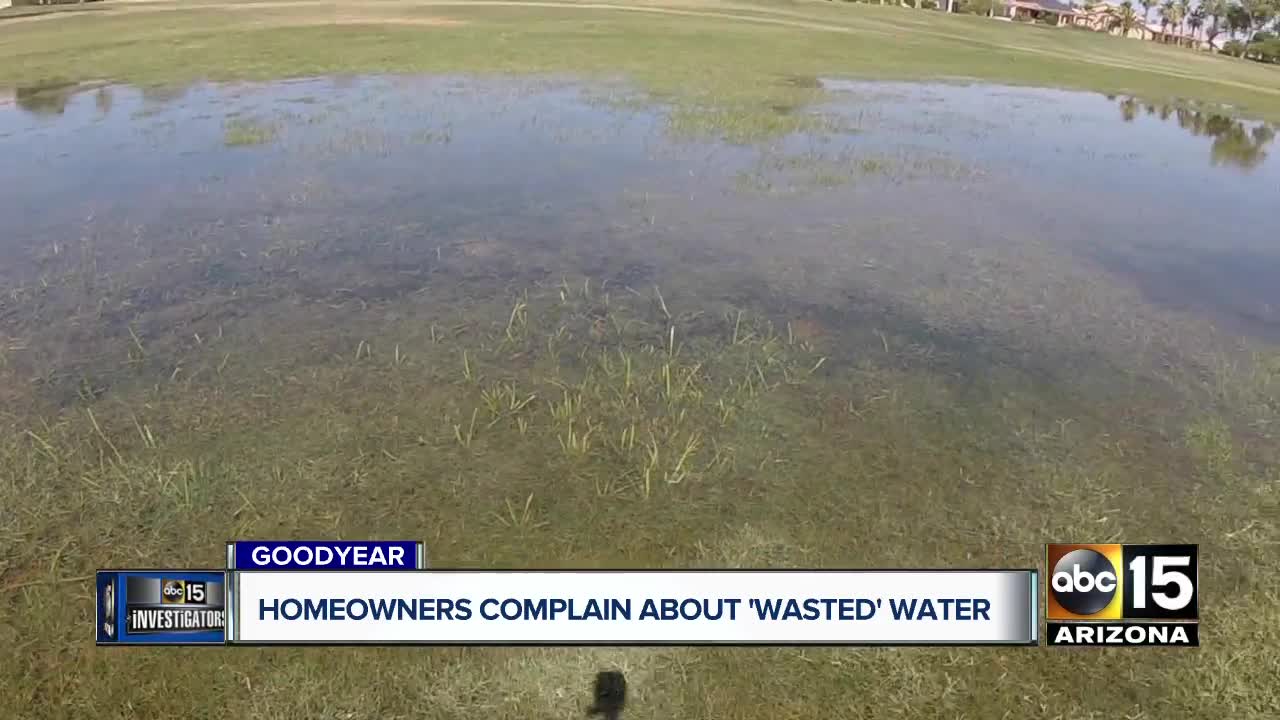 GOODYEAR, AZ — In Goodyear's Pebble Creek neighborhood, homeowners say a river now running through their neighborhood is a nuisance, a public health hazard and a waste of a precious desert resource.

Richard and Janet Kirshbaum paid to live on the golf course, but these days it looks more like a water hazard. More and more often, the golf course on Bullard Wash and their streets flood.

"Lord knows what's in the water," Richard said. One of their neighbors was diagnosed with West Nile Virus, transmitted by mosquitos.

The Pebble Creek Homeowners Association started tracking. The HOA measured high water on 38 days in 2018 and 64 days so far in 2019. That includes nearly every day last month.

Last year, a city of Goodyear study said the source of the flooding is tailwater, the name for runoff from nearby fields. According to the study, field irrigation is "not a precise practice" and there is "no single entity" to "work out a mitigation solution." However, that doesn't explain why the water levels increased in the last couple of years.

"We believe it's excess water that the farmers are paying for that they don't need, and it is just running off," Richard said.

"Everybody would get frustrated if water is being wasted," said Sam German, who works at a tree nursery in the area.

"I don't want you to put me on the spot for me saying we need to conserve more water...That were flooded people out...Because that's not our intention," said rose farmer Henry Conklin, who sits on the board of a local irrigation district.

Conklin explains the irrigation process has been the same for decades. Farmers order water from Lake Pleasant, flood the fields, catch runoff in ponds, and pump back upfield to water again. Farmers down the line can use the overflow.

In addition, Luke Air Force Base, concerned about birds hitting its jets, started a massive project in 2017 to remove nesting habitat from canals and waterways. Other canals in the area were also cleared, which water engineering experts say could have increased the speed and volume of water.

All those factors come together as a river of water, which drains into Bullard Wash and heads straight toward the Pebble Creek neighborhood.

"We can't just turn the water off," Conklin said. "Somebody's going have to deal with it, and how they deal with it - that's the question."

Pebble Creek's HOA is now asking the city to approve plans to rebuild roads and add culverts, but the homeowners will have to bear the cost because the neighborhood is all private property. Even that project won't conserve any water or drain the swamp.

"So it's like everybody's passing the buck," Richard Kirshbaum said.