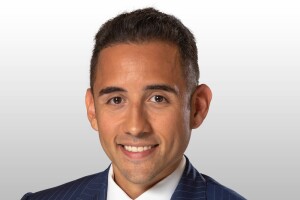 Jorge Torres is the weekend evening meteorologist on ABC15.

He joined the ABC15 team in October 2019, but is quite familiar with weather coverage throughout the desert southwest.

Born in Austin, Texas of a Puerto Rican father and Mexican mother, Jorge was raised in the suburban community of Pflugerville and went to study Meteorology and Spanish at Texas A&M University. In college, he joined the Texas A&M Student Chapter of the American Meteorological Society, where he eventually became president during his senior year. He was also involved with the storm chasing group, Texas Aggie Storm Chasers, and is also a brother of Omega Delta Phi.

Jorge has been in the broadcast meteorology industry for more than 10 years, starting his professional career in El Paso, Texas at KVIA-TV. He was also chief meteorologist at KOB-TV in Albuquerque, New Mexico. He holds both the American Meteorological Society's Certified Broadcast Meteorologist seal and the National Weather Association's Television Weathercaster Seal of Approval.

He has a decade of experience covering all types of weather, ranging from drought, dust storms, winter weather, severe thunderstorms, and tornadoes. He'll now be focusing on the monsoon, excessive heat, and the snowstorms that hit Arizona.

Jorge is passionate about weather and the community. Whenever he's not on-air, he enjoys visiting local schools and talking to kids about weather, science, and climate.

You can find Jorge exploring the Valley, its eateries, exercising, traveling, and enjoying new spots to salsa dance.

Jorge grew up as a big time baseball fan, favoring the Pittsburgh Pirates, New York Yankees, and Texas Rangers. He also roots for the Houston Texans, Houston Rockets, and most importantly, his Fightin' Texas Aggies.