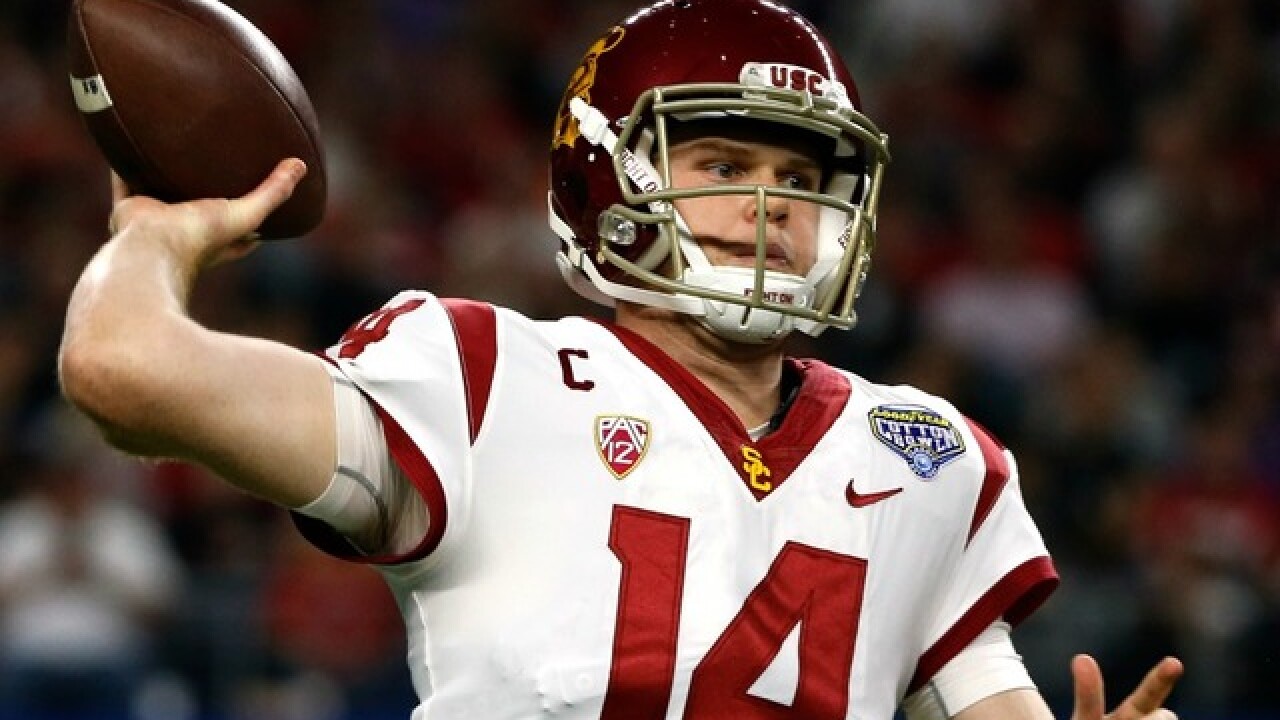 Copyright 2018 Scripps Media, Inc. All rights reserved. This material may not be published, broadcast, rewritten, or redistributed.
Ron Jenkins
<p>Sam Darnold #14 of the USC Trojans looks to throw against the Ohio State Buckeyes in the first half of the 82nd Goodyear Cotton Bowl Classic between USC and Ohio State at AT&T Stadium on December 29, 2017 in Arlington, Texas. (Getty Images)</p>

USC quarterback Sam Darnold is projected by some experts to be the No. 1 overall pick in next month's NFL Draft -- but that didn't stop the Arizona Cardinals from heading to California to pay him a visit Wednesday.

Darnold worked out at USC during his Pro Day on Wednesday, and among those in town to watch were Cardinals coach Steve Wilks, general manager Steve Keim, offensive coordinator Mike McCoy and quarterbacks coach Byron Leftwich, according to ESPN's Adam Schefter.

The Cardinals currently own the No. 15 overall pick in this year's draft, which means if the Cardinals want Darnold, they'll likely have to make a trade to move up in the draft.

SEE ALSO: 6 players the Cardinals might take in the first round of the 2018 NFL Draft

Schefter said coaches from the Cleveland Browns, who own the No. 1 pick in this year's draft, were also on hand to check our Darnold. Coaches from the New York Giants, New York Jets and Los Angeles Chargers were also in attendance. The Giants and Jets own the No. 2 and 3 overall picks in the draft, respectively.

It was pouring rain, but that didn't stop Sam Darnold from throwing dimes at his Pro Day. 🎯 pic.twitter.com/Wj7YARyOG3

The 6-foot-3, 220-pound Darnold threw 57 touchdowns and 22 interceptions while completing 64.9 percent of his passes in 27 games as the Trojans' starting quarterback. He guided USC to the 2017 Pac-12 championship and an appearance in the Cotton Bowl.

The Cardinals acquired two quarterbacks -- Sam Bradford and Mike Glennon -- through free agency last week. But many experts believe the Cards could still select a quarterback in the first round of the draft, which will take place Thursday, April 26.

Carson Palmer retired in January after spending the better part of five years as the Cardinals' starting quarterback. Backups Drew Stanton and Blaine Gabbert are free agents, leaving the Cards without a single QB on their roster until the signings of Bradford and Glennon.