BLOG: For Wildcat Nation, the 'Bear Down' motto is more important than ever 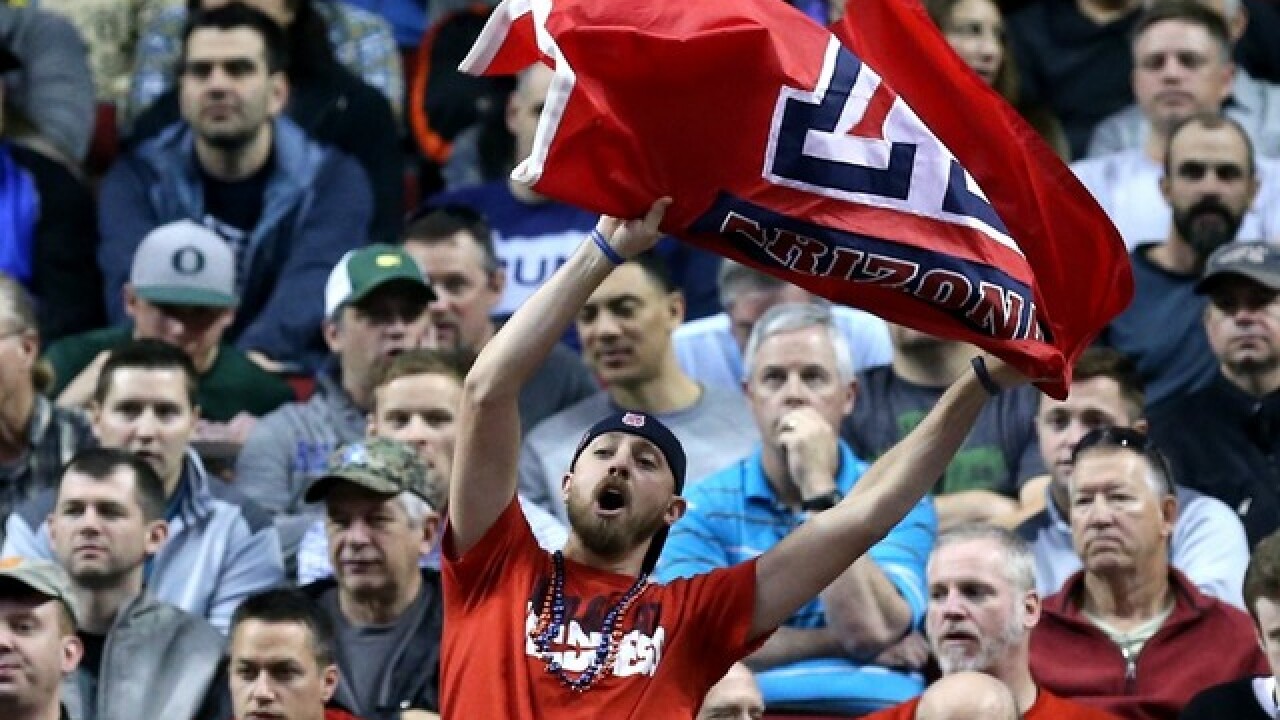 Copyright 2018 Scripps Media, Inc. All rights reserved. This material may not be published, broadcast, rewritten, or redistributed.
Stephen Dunn
<p>An Arizona Wildcats fan waves a flag as Arizona Wildcats plays Texas Southern Tigers during the second round of the 2015 NCAA Men's Basketball Tournament at Moda Center on March 19, 2015 in Portland, Oregon. (Getty Images)</p>

Let's get right to it: It's not easy to be an Arizona Wildcat right now.

From men's basketball coaches accused of paying players, to sexual misconduct allegations against former football coach Rich Rodriguez and jaw-dropping claims of rape against football players, The University of Arizona has been making headlines for all the wrong reasons.

These allegations should make every Wildcat fan angry. Some of these alleged crimes are flat-out reprehensible, and if they're proven to be true, the guilty parties should be punished to the full extent of the law. And with all of the dark clouds surrounding the university, some Wildcat fans might be reluctant, and perhaps even ashamed, to wear their school colors right now.

But in spite of all the negative headlines, UA fans, students and alumni should continue to be proud to wear Wildcat red and blue -- not in spite of these allegations, but because of all the players, coaches and teams that made them proud to be a Wildcat, and still do.

For starters, UA fans should take time to remember some of the incredible athletes who prompted them to make emotional and financial investments into the university in the first place. That list is too long for this column, but here are a few:

-Chuck Cecil, a former walk-on who made the most iconic play in Wildcat football history and returned to the program last year as a defensive analyst. Cecil had some words of wisdom for Wildcat fans amid the turmoil of the last few days:

For us @UofA @UAAA @AZATHLETICS: Quick reminder of who we are & our legacy from J.F. “Pop” McKale, recounting John Byrd “Button” Salmon's last message 2 teammates before his death, "#BearDown." We are one w/#Tradition. @APlayersProgram #BearDown 👊🏽🏀 pm > @OregonMBB. #NoFear pic.twitter.com/d6EUAk8oTT

Getting the opportunity to pour into our youth with @Mlb @MLBRBI elates my ❤️. Such an incredible gift to encourage, share, & teach these athletes. Love seeing first hand how the @MLB Urban Youth Academy’s and the RBI leagues are changing lives! #DreamBelieve pic.twitter.com/UNWqjkUrbZ

-Richard Jefferson, who led UA to the 2001 national championship game and was a 2016 NBA champion. Jefferson donated $3.5 million toward the creation of a multi-purpose gymnasium at UA.

-T.J. McConnell, who embodies everything right about Wildcat basketball. An undrafted player, McConnell just became the first player in 76ers history to record a triple-double off the bench.

-Nick Foles, who went from nearly quitting football two years ago to guiding the Eagles to their first-ever Super Bowl title. Foles offered some powerful words of wisdom during his postgame interview.

-And of course, there’s the legacy of John “Button” Salmon, the Wildcat quarterback who uttered those famous words – "Bear Down" – to coach Pop McKale shortly before he passed away 92 years ago.

On most days, “Bear Down” is simply the university's motto. Right now, they're words for Wildcat Nation to cling to.

But it's not just the past that Wildcat fans can take pride in. The baseball and softball teams, both of which have championship pedigrees, are off to great starts this year. The women’s basketball team, led by star UA forward-turned-coach Adia Barnes, has put together a monster 2018 recruiting class. The soccer team is coming off its best-ever season. And the football team has an outstanding new head coach with a Heisman Trophy-caliber quarterback.

Continue to cheer on the teams and athletes worthy of your time and treasure. They shouldn’t be punished for the actions of others.

And most importantly, continue to display the colors. Wear your UA polo to work. Keep that alumni plate frame on your car. Fly the flag over your house to annoy your Sun Devil neighbors. Brush off the mockery if it comes.

Fans of ASU (and certain other schools) won’t be satisfied until Wildcat hopes and dreams are crushed beyond repair. That, of course, will never happen. Don’t give them the satisfaction of believing it has.

Tough times have come upon The University of Arizona, and they might stick around for a while. But history says they won’t last forever. In the meantime, remember the players, coaches and teams, both past and present, that make you proud to wear that block A. They're the reasons Wildcat Nation should continue to Bear Down with pride.