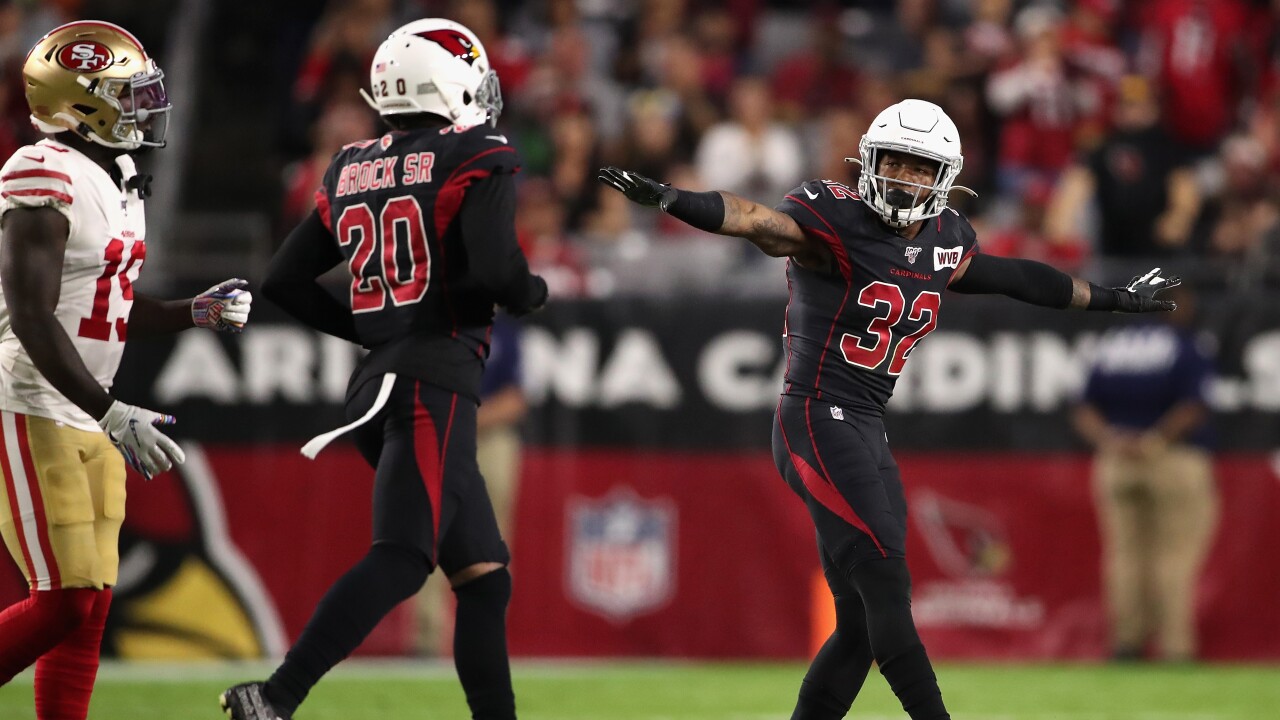 Christian Petersen/Getty Images
GLENDALE, ARIZONA - OCTOBER 31: Strong safety Budda Baker #32 of the Arizona Cardinals reacts to a stop with defensive back Tramaine Brock #20 during the first half of the NFL game against the San Francisco 49ers at State Farm Stadium on October 31, 2019 in Glendale, Arizona. (Photo by Christian Petersen/Getty Images)

GLENDALE, AZ — The Arizona Cardinals are looking to bounce back this weekend with a win as they take on Bruce Arians and the Tampa Bay Buccaneers.

The Cardinals hope to have running back David Johnson back for Sunday's game after he missed the past two games because of an ankle injury. Johnson has 300 yards rushing and 315 yards receiving this season. He'll likely split time with Kenyan Drake, who ran for 110 yards and a touchdown and caught four passes for 52 yards on Oct. 31 in a 28-25 loss to the San Francisco 49ers. It was Drake's first game after being acquired in a trade from the Miami Dolphins three days earlier. The team's other main RB, Chase Edmonds (hamstring), is expected to miss his second straight game.

RELATED: D.J. Humphries unloads about Bruce Arians’ less than flattering nickname for him

Sunday’s game, however, might come down to whether or not Patrick Peterson and the Cards defense can bounce back from a rough week against San Francisco. On the season, Arizona's defense is giving up more than 407 yards per game, which ranks 30th in the league.

So can the Cardinals overcome their injuries and defensive woes against the Buccaneers offense? Here are predictions from the ABC15 sports team.

The Cardinals played good enough last week to beat the 49ers, despite a poor performance by Pro-Bowl corner Patrick Peterson and in spite of a couple of bad decisions by Kliff Kingsbury.

The bottom line this week is, are they good enough to beat a Tampa Bay team that hasn’t won at home since last season?

Tampa Bay is led by former Cardinals head coach Bruce Arians, but honestly, I think too much time has gone by for that to even matter this week.

In fact, there are very few players left in the Cardinals locker room that even played for Bruce, so I doubt there’s much intrigue when it comes to a Bruce vs. his old team story line.

Vegas has the Bucs as 4.5-point favorites and they may be right, but I think the Cards are better than people are giving them credit for. Add in the fact that RB David Johnson returns this weekend to join forces with Kenyan Drake, and the Cardinals may be able to run the ball, even if Tampa is one of the best against the rush.

I also think Kyler Murray is getting better and better each week, so I expect him to have a break-out day in the sunshine.

I’m going with the Cardinals on the road this week, but I do think it’ll be close.

Good to see you again baby!!!

You can bet those type of greetings followed by Bruce Arians signature "babies" will be uttered quite a bit in the hours preceding the Cardinals Sunday road match-up against the struggling Tampa Bay Buccaneers but once that ball is kicked, it'll be game-on with two teams and two head coaches desperate for a win to keep their seasons somewhat stabilized.

"There's only about eight or nine guys left on that team from when I had them two years ago -- pretty good overhaul," Buccaneers coach Bruce Arians said. "Those guys -- it's always different (and) difficult.I don't like going against friends, but we're not friends when it's kicked off."

Right now both franchises can point to a few positives but from a record standpoint, both the Cards and Bucs enter this game on rickety sticks.

Arians, the all-time winningest coach in Cardinals history is back on the sidelines after a one year retirement and his MO hasn't changed. Led by quarterback Jameis Winston, the old coach still likes to "spin in" down the field and his "no risk it, no biscuit" offense has propelled the Buccaneers to a top-six passing offense in the NFL this season. What the offense hasn't done however is produce many wins. The Bucs are 2-6 this year and still winless (0-3) at home. While fallibility for a 2-6 record always begins in their own lockerroom, a quick glance at the Bucs schedule will tell you the NFL did not do Arians his players any favors in the first half of the season. Heavy travel and tough opponents have dominated the Bucs slate and they're hoping for better times in the season's second half and that begins Sunday against the Cardinals. Arians, Winston and leading receiver Mike Evans should be salivating to chop up a Cardinals defense that leads the league in passing touchdowns allowed having given up 24 on the season.

The Cardinals will counter with the ever-improving offensive attack led by quarterback Kyler Murray. Sunday, Cardinals coach Kliff Kinsgbury will also debut his new running back tandem of a supposedly healthy David Johnson and the newly acquired Kenyan Drake. Drake amassed 162 yards from scrimmage in his debut last week against the 49ers. It should be interesting to see how Kingsbury deploys both Drake and Johnson Sunday in Tampa. A sobering statistic for Cardinals fans though, the Buccaneers boast the NFL's top rushing defense allowing 78.1 yards per game on the ground. If the numbers don't lie Sunday, Murray will have to outplay Winston in the passing game for the Cardinals to pull off the upset on the road. I think the Cardinals will play well and compete Sunday but Arians and the Bucs are due for a home win after a brutal 8-game stretch to open the season.