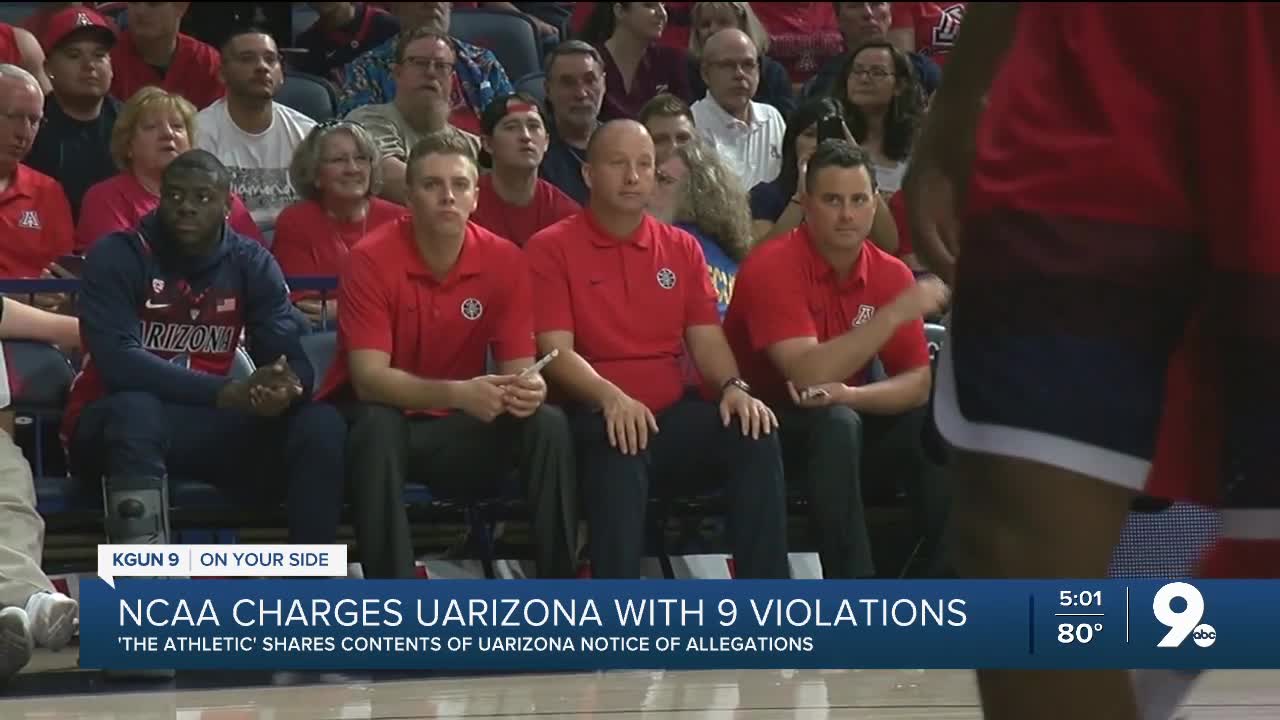 The NCAA has charged the University of Arizona with nine total allegations, five of which are Level 1 violations, according to a report from The Athletic.

The Arizona Board of Regents met Monday afternoon in a special executive session to discuss the Notice of Allegations delivered by the NCAA to the University of Arizona last week.

ABOR Chairman Larry Penley said no action would be taken at the meeting, but rather to seek legal advice.

According to a report by The Athletic on Sunday afternoon, the NCAA has charged the University of Arizona with nine infractions, five of which are Level I violations. The allegations include lack of head coach control by Wildcats men's basketball coach Sean Miller, as well as lack of institutional control and failure to monitor by the university.

"I think overall, it's a pretty damning Notice of Allegations," said David Ridpath, a University of Ohio professor who is an expert in NCAA violations. "Arizona is going to have to make a choice of, are they going to go all in to try to protect Sean Miller? Whether Sean Miller knew, participated or didn't know, it's all bad that this went on, and it all still falls at Sean Miller's feet."

ESPN College Basketball Insider, and a lawyer himself, Jay Bilas said when the initial allegations came out against then-assistant coach Book Richardson more than three years ago, he believed Miller didn't know, but that opinion changed when more information was presented.

Richardson was caught on wiretap discussing payments to recruits and was arrested by the FBI. He later pleaded guilty to bribery charges and spent three months in prison.

"I think you have to be reasonable in this with your judgments," Bilas said. "And to me, given the things that were on wiretap, the things that came out in evidence, it's difficult to imagine that all these things, everybody lied, and everybody lied not knowing they were being taped by the government. That's hard to swallow."

When asked about the NOA four times during his media day last week, Miller would not comment.

The Athletic's report said that the University of Arizona has requested a hearing in front of the newly-formed Independent Accountability Review Process (IARP), a committee created to handle complex cases, rather than the NCAA Committee on Infractions (COI). So far, no school has appeared in front of the IARP.

Of the many schools caught up in this widespread college basketball corruption scandal, only Oklahoma State has received its punishment.

"Oklahoma State was a much smaller issue, smaller case," said Bilas. "The COI really kind of dropped the hammer on Oklahoma State relative to the penalties that were levied against the Cowboy basketball program. So for Arizona, LSU, Kansas, all these other programs, that doesn't particularly bode well."

Asked how drastically the likely sanctions could affect the program, Bilas offered this.

Level I violations are the most severe and could include a postseason ban, scholarship reductions, and a lengthy suspension or multi-year ban from college athletics for the head coach.

“I think if you're an Arizona fan, to sit there and think that this is all going to go away and everything's going to be fine, it is highly doubtful that would happen. There's going to be some sanctions from this,” said Ridpath. “But it's an elite basketball program. It's one of the top programs in the country. Seldom have I seen even major infractions take down a major basketball program. A school like Arizona can withstand the loss of a few scholarships over a few years because you're still getting 10 top-flight players. Even if Sean Miller is no longer the coach at Arizona, or suspended or whatever it may be, Arizona is going to have a pretty darn good coach come in, so I don't look at it as any type of death knell or anything for Arizona basketball.”