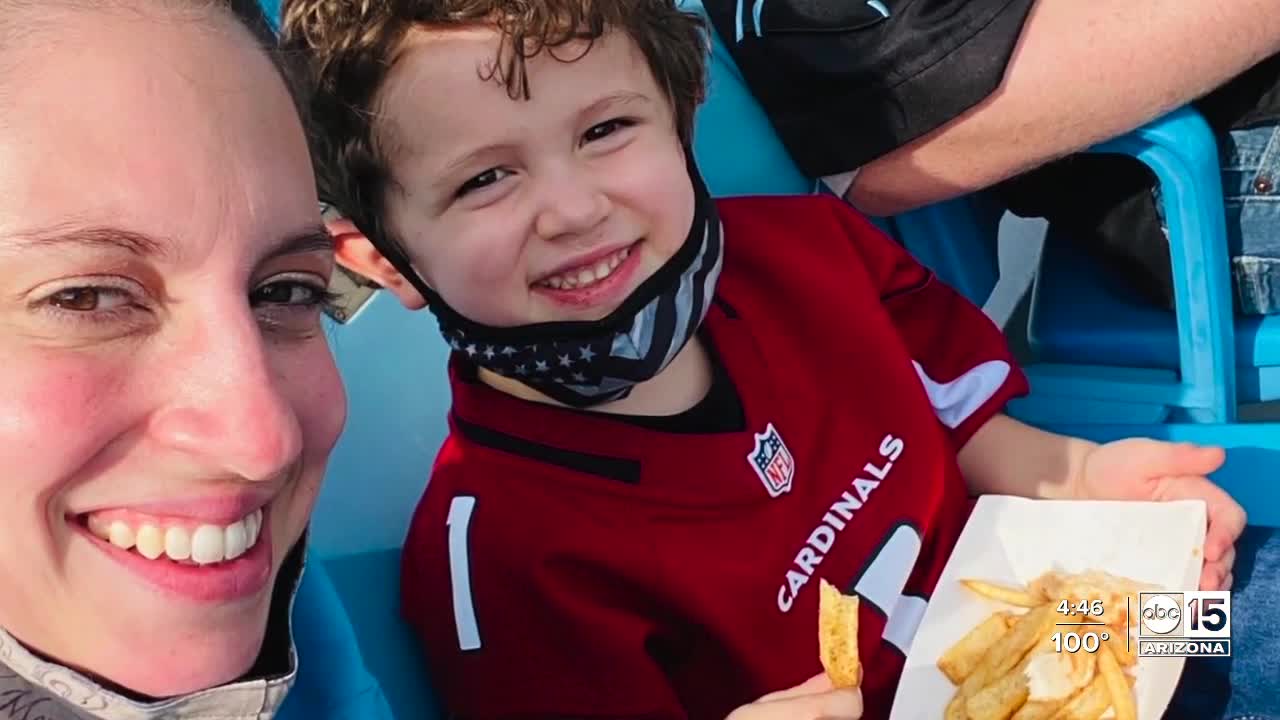 Lincoln has never lived in Arizona. In fact, his mom Micah is a Packers fan, and dad, a fan of their home town Panthers. But for Lincoln, it’s always been about the Cardinals.

In a video posted on Twitter, a young boy wearing an Arizona Cardinals jersey rips into a small package and feverishly pulling out the tissue paper before getting to the goods.

To understand the excitement over what was inside that brown box delivered to the North Carolina five-year-old, we go back to when little Lincoln Higgins was just three years old. A simple love for a bright red bird in his back yard would cement his fandom.

Lincoln has never lived in Arizona. In fact, his mom Micah is a Packers fan, and his dad is a fan of their home town Panthers. But for Lincoln, it’s always been about the Cardinals.

“So, we just thought eventually he’d team up with one of us,” said his mom Micah.

“They tried hard but I was like nope, nope, nope,” said Lincoln in response to his parent pleas.

On Sunday, the family made the trek to Bank of America Stadium in Charlotte for a face-off between the home team and Lincoln's team.

“I was like oh my gosh,” said Lincoln. “The stadium was huge!”

He’d dawn a fresh Kyler Murray jersey gifted to him by his parents before the game. And was rooting on his adopted team all game long.

“My husband posted just a picture of us talking about how he’s a Cardinals fan even though we’re not,” said Micah.

While Lincoln wouldn’t go home with a win after the Panthers cruised to a 31-21 victory over the Cardinals, a tweet caught the attention of the Cardinals organization.

The Cards tweeted back “You’re the best, Lincoln! Thanks for coming to watch and cheer us on. Sorry we couldn’t win for you!”

You’re the best, Lincoln! Thanks for coming to watch and cheer us on. Sorry we couldn’t win for you!

Instead, the team promptly sent the young fan quite the care package.

“We just were super overwhelmed by their kindness and just making him feel special,” said Micah.

The box filled with Cardinals buttons, headbands, beanie’s and a giant flag now pinned above his bed.

A once in a lifetime moment and one any fan can appreciate.

“In a way, I’m sad that he’s not pulling for the same team as me but I’m also really proud of him for picking his team and staying super loyal cause that’s what a true fan does,” said his mom.