2020 NFL DRAFT: Who will the Cardinals pick to pair with Kyler Murray? 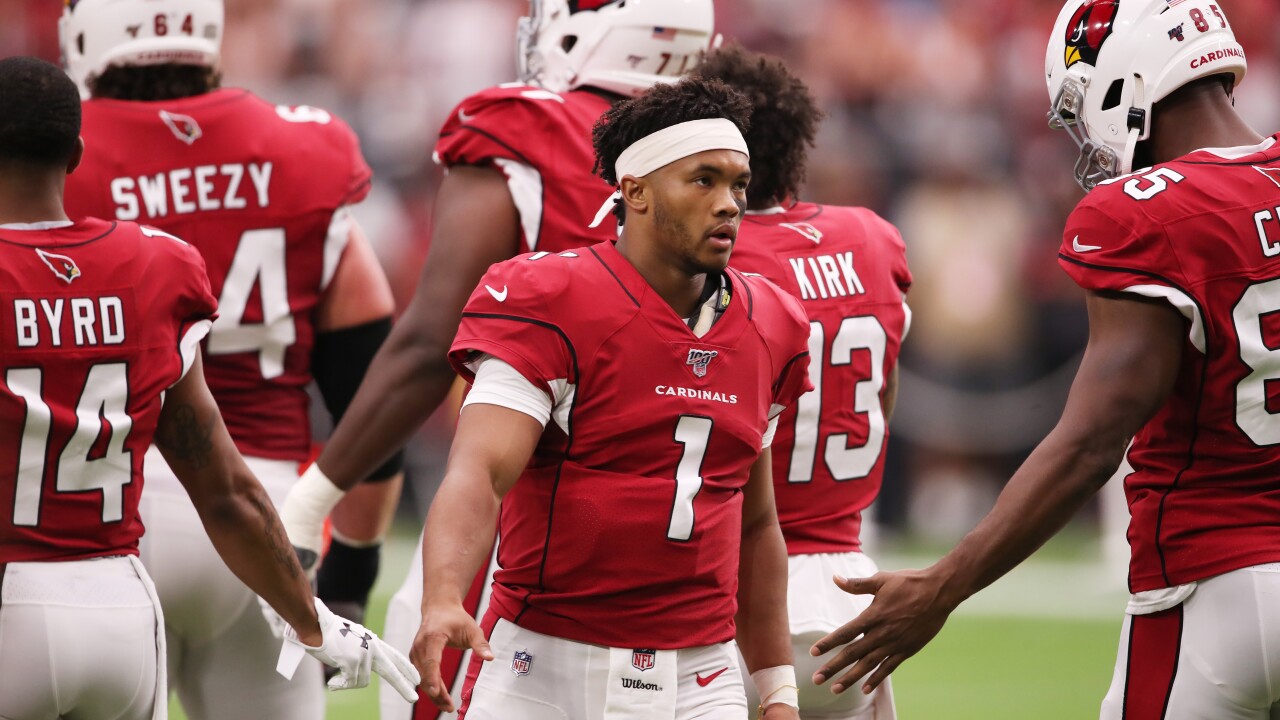 Christian Petersen/Getty Images
Quarterback Kyler Murray #1 of the Arizona Cardinals is introduced prior to their game against the Detroit Lions at State Farm Stadium on September 08, 2019 in Glendale, Arizona. (Getty Images)

GLENDALE, AZ — Normally when you hear that something has “never been seen before” in sports, it’s a hyperbole. This year it’s no exaggeration that the NFL Draft will be like no other in the history of the game.

Just like most of us at home, the NFL and its 32 teams have quickly gotten adjusted to conference calls, Zoom meetings and working remotely.

That technology will face a major test on Thursday when teams make their draft picks remotely, and Commissioner Roger Goodell reads the picks from his own home. It will be intriguing to see how the process works, and if technology holds up without any hiccups.

That being said, the Arizona Cardinals still have a job to do with the eighth pick in the first round and have been evaluating prospects from home for the last few months.

Though most Cardinals fans feel that 2019 was a positive season with the growth of Kyler Murray and evolution of the offense under Kliff Kingsbury, the reality is the team still went 5-10-1 and finished last in one of the toughest divisions in the NFL.

So what holes will the Cardinals focus on in this year’s draft?

Here are predictions from the ABC15 sports team:

With just a few days to go, I really think the Cards are focused on protecting Kyler Murray.

Kyler tied with Matt Ryan and Russell Wilson in 2019, taking the most sacks (48) through 16 games. That’s way too many for a young quarterback. If you listen to Kliff Kingsbury, he’ll tell you a lot of those were on Kyler as he was trying to get a feel for the speed of NFL defenders. I tend to agree with Kliff, but on the other hand, Kyler isn’t built like Russell Wilson or Matt Ryan and with his small frame, you absolutely need to protect him going forward.

That said, this is a solid year for offensive tackles, which is what the Cardinals need. Yes, they have Marcus Gilbert back and re-signed Justin Murray and D.J. Humphries., but they don’t have a right tackle they can hang their hat on. Gilbert (32) missed the entire 2019 season, 10-games in 2018 with the Steelers, missed 5-games in 2017 with injuries and 4-more for using performance enhancing drugs. He just hasn’t been healthy since 2015. Justin Murray (27) is now with his sixth team since signing with the Broncos as an undrafted free agent in 2016. Yes, that six teams in four seasons. So, the assumption is, he’s good enough to get on a roster, but not good enough to be a long-term starter (at least not yet).

That said, he did start 12-games for the Cardinals last season, but again, that was more out of need than talent. Is he good enough? Maybe, but it’s a stretch.

So again, I might look to someone like Tristan Wirfs out of Iowa or Mekhi Becton out of Louisville, or even Jedrick Wills from Alabama.

But then there’s the Lions at #3, the Giants at #4, the Dolphins at #5, the Chargers at #6 and the Panthers at #7. If the Cardinals can find a trade partner, I could see them moving up to take an Isaiah Simmons (OLB, Clemson) or perhaps Jeff Okudah (CB, Ohio State). Getting to #2 to grab Chase Young seems out of the question, but then again, Steve Keim did convince Texans Coach Bill O’Brien to trade away one of the best receivers in the entire league in DeAndre Hopkins.

Will they trade down? Possibly. If they’re not in love with who’s available at #8, they may try to move down a few spots (although I don’t think they’d trade below 12 or 13) and still get a solid started at OT, WR or DB.

G.M. Steve Keim gave us absolutely nothing to go on this past week and this is what makes the Draft so much fun. But when all is said and done, I still think you have to protect your franchise quarterback first and foremost.

This year’s NFL Draft may not have the same pizzazz without fans, Bellagio fountains and endless, merciless booing of Commissioner Roger Goodell (please add a boo track on the telecast), but I am excited to see how this Virtual Draft plays out.

For the Arizona Cardinals, it’s not as exciting as having the #1 overall pick like last year, but the many directions they can take at #8 is fascinating. They have several needs, but none are so glaring that it is a must in the first round, which opens the door to a whole bunch of possibilities. Let’s get into the weeds, shall we?

The Cardinals need help on the offensive line and with the pass rush. The majority of analysts and mock drafts have the Cards going with an offensive tackle. What scares me is there seems to be no consensus among the order of the top four prospects at the position. And I don’t think that’s because they are all bonafide superstars, but they are all so different in their strengths, and are a work in progress.

Tristan Wirfs (Iowa): Extremely athletic and seems to be a good fit for this offense

Jedrick Wills (Alabama): Versatile and most NFL ready on day 1

Andrew Thomas (Georgia): May be the best pass protector, but is generally ranked 4th among them

It really depends on who the Cardinals think would be the best fit. If one is not clearly better than the rest in the organization’s eyes, spending the 8th overall pick seems to be a steep price to pay.

As for the defense, the Cardinals front office addressed some needs with the signing of Jordan Phillips, Devon Kennard and De’Vondre Campbell, but I still think they could use another piece.

If Clemson linebacker Isaiah Simmons somehow falls to #8, I don’t think Steve Keim can pass on him. He can rush, cover and do just about anything. Auburn’s Derrick Brown can disrupt things on the line and the Cardinals could certainly use some help on the interior. There’s a good chance he’s also gone by #8.

To me, unless there is someone who knocks the Cardinals socks off and they just can’t pass them up, I would trade down into the middle of the first round and try to get back into the second round. By doing that, there’s a chance one of the four offensive tackles is still there, or South Carolina DT Javon Kinlaw. The Cardinals could still fill either of those holes and then in the second round, go after a WR since the class is so deep with first round grades, or address the secondary.

The NFC West is the best division in football, and while the Cardinals will be competitive this year, I don’t think they’re quite ready to compete for the division crown. Adding some draft capital to fill multiple needs is the better move in the long run.