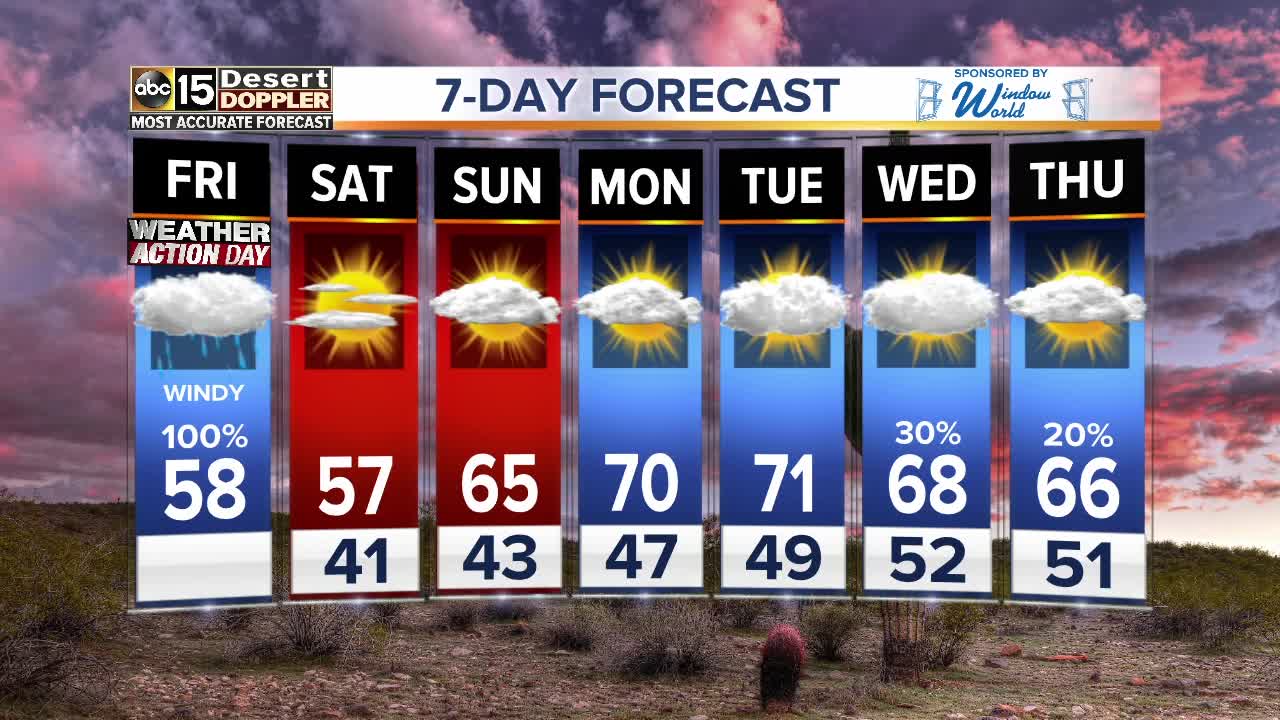 It's another Weather Action Day as we track storms around the Valley. 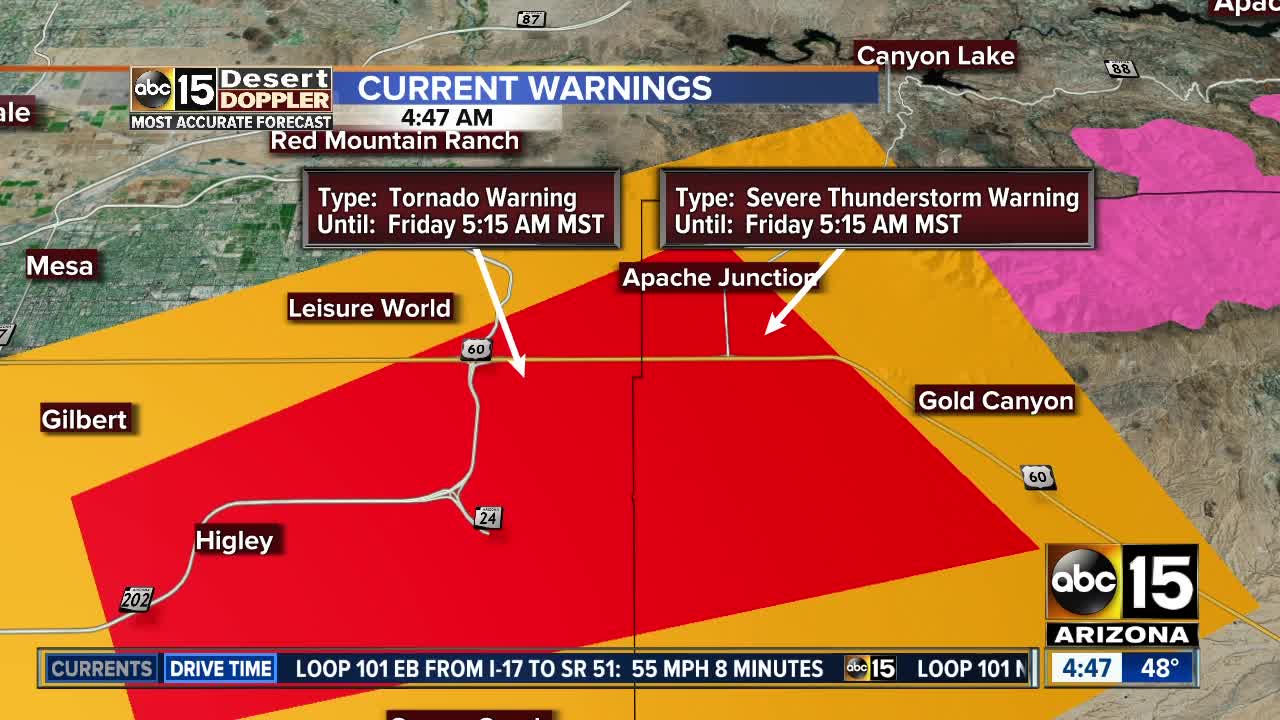 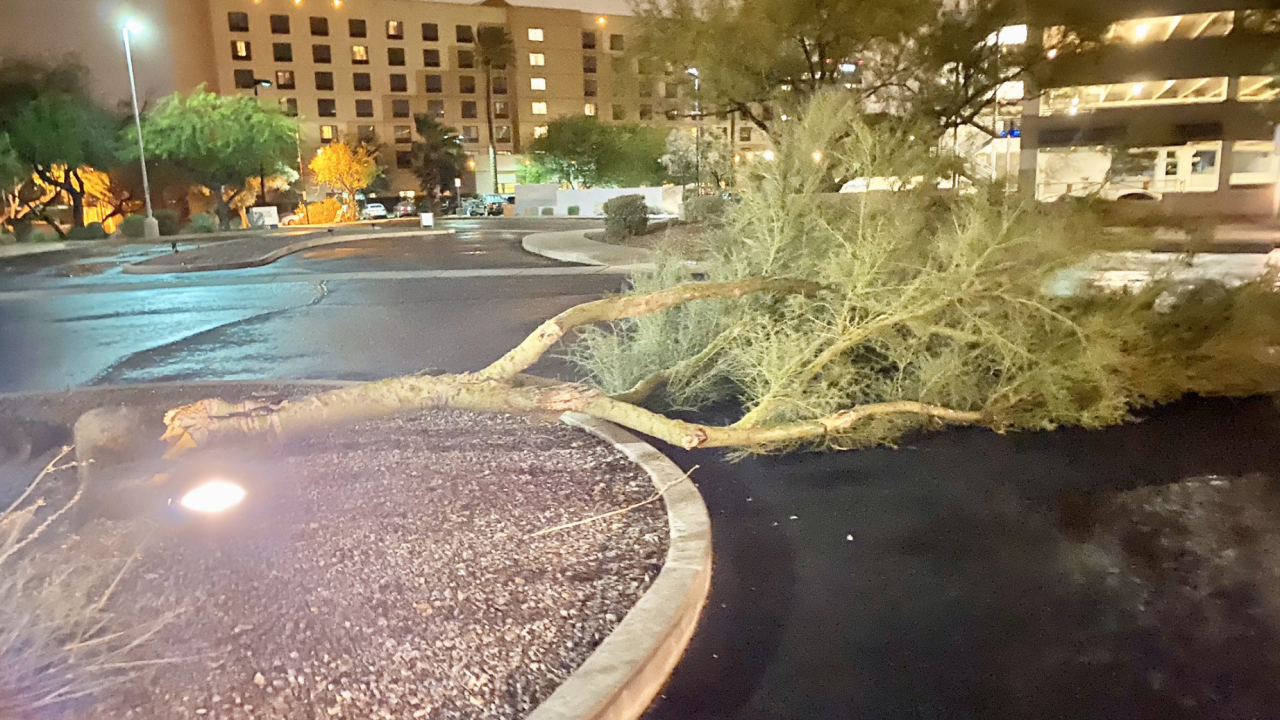 Areas around the Phoenix metro have been under two Tornado Warnings, as well as Severe Thunderstorm Warnings and Flood Advisories.

BREAKDOWN: What to expect from storms

RAINFALL TOTALS: how much has fallen near you?

POWER OUTAGES: Thousands without power in the Valley

Here are the latest weather updates:

We've been busy doing research on the weather from this morning...with much more to do...but here is the local storm report for one confirmed tornado (based on radar and storm damage). #azwx pic.twitter.com/OdG0qIcJsf

Phoenix folks heading north, or wanting to come south, make sure you follow @NWSFlagstaff for the latest on the weather in that neck of the woods. #azwx https://t.co/hYlmhPap9m

As temps drop tonight, expect slick roads. There are still some highways that are closed at this hour:
SR 87 closed from Payson to Winslow.
SR 89A closed from Sedona to the I-17 junction.
SR 260 closed from Camp Verde to SR 87.#KnowSnow #azwx pic.twitter.com/iy4XTbxmp5

UPDATE: I-40 westbound is now CLOSED due to this crash west of Seligman at milepost 113.

Motorists are advised to expect delays and postpone travel.

There is no estimated time to reopen the highway.#aztraffic pic.twitter.com/VfYxfJ7Hic

SR 89A remains CLOSED from Sedona to the I-17 junction due to winter weather.#axwx #KnowSnow pic.twitter.com/uRKgVCE4Lv

Latest Valley Radar at 2:49pm...small storm along the 60 has a history of producing small hail. #azwx pic.twitter.com/hxI7U4O6TD

UPDATE: State Route 260 is now open between between Heber and Star Valley, mileposts 255 to 302.#aztraffic pic.twitter.com/eqcTxKveOd

155pm: Snow showers continue above about 3500 feet over northern Arizona. Even on plowed roads, be prepared for additional accumulating snow, hazardous conditions, and rapid changes in visibility. #azwx pic.twitter.com/9Qq7rLWqfn

We're opening some freeways this afternoon - I-17 and I-40 especially. Thanks for your patience. It was a huge storm and our folks on the plows have been working hard to open the roads. Still more work to be done.

Looks like SR 89 has reopened between Drake and Ash Fork, and US 60 is in the process of reopening between Globe and Show Low. On US 60 it may be slower than normal - we're sending a plow ahead of vehicles just to make sure the road is good. Thanks for your patience.

UPDATE: US 60 closed between Show Low and Globe. Multiple highways in northern Arizona are closed due to a strong winter storm. This includes I-40 and northbound I-17. PLEASE POSTPONE TRAVEL until the storm passes.#azwx #KnowSnow pic.twitter.com/v2ZbvmXQko

Braving the roads to enjoy an attraction today? Check their schedule first -- Arcosanti says they are closed today and to avoid their road, and earlier, Sunrise Park Resort said they were working on restoring power. #abc15wx

The City of Prescott Public Works Department was activated at around 2am this morning as snow began to accumulate quickly. All 14 trucks are working the major streets in Prescott. We ask that people stay off the roads if at all possible so that the plows can keep the roads clear

7:40 am Rainfall Update: Know that these numbers are changing quickly as more rain moves through the Valley.

BUT we're approaching a rainfall record in #Phoenix and many spots approaching or topping an inch, already.#abc15wx @FCDFloodInfo pic.twitter.com/fFKd4k2Dh4

Tornado Warning including Marana AZ until 7:00 AM MST pic.twitter.com/bTvffcJlBe

Look at this wind damage at an apartment complex near Shea and 30th St. in North Phoenix. Thank you Scott Allen for sharing @abc15 pic.twitter.com/sObZ74wqn4

SR 238 WB: Highway closed near 91st Avenue due to water on the road. #aztraffic pic.twitter.com/NI60dD9qd5

REMINDER: Multiple highways in northern Arizona are closed due to a strong winter storm. This includes I-40 and northbound I-17. PLEASE POSTPONE TRAVEL until the storm passes.#azwx #KnowSnow pic.twitter.com/t3eKTERHiQ

414am: The Tornado Warning has expired. However, a large area of very strong straight line winds will continue over metro Phoenix through at least 5 am. #azwx