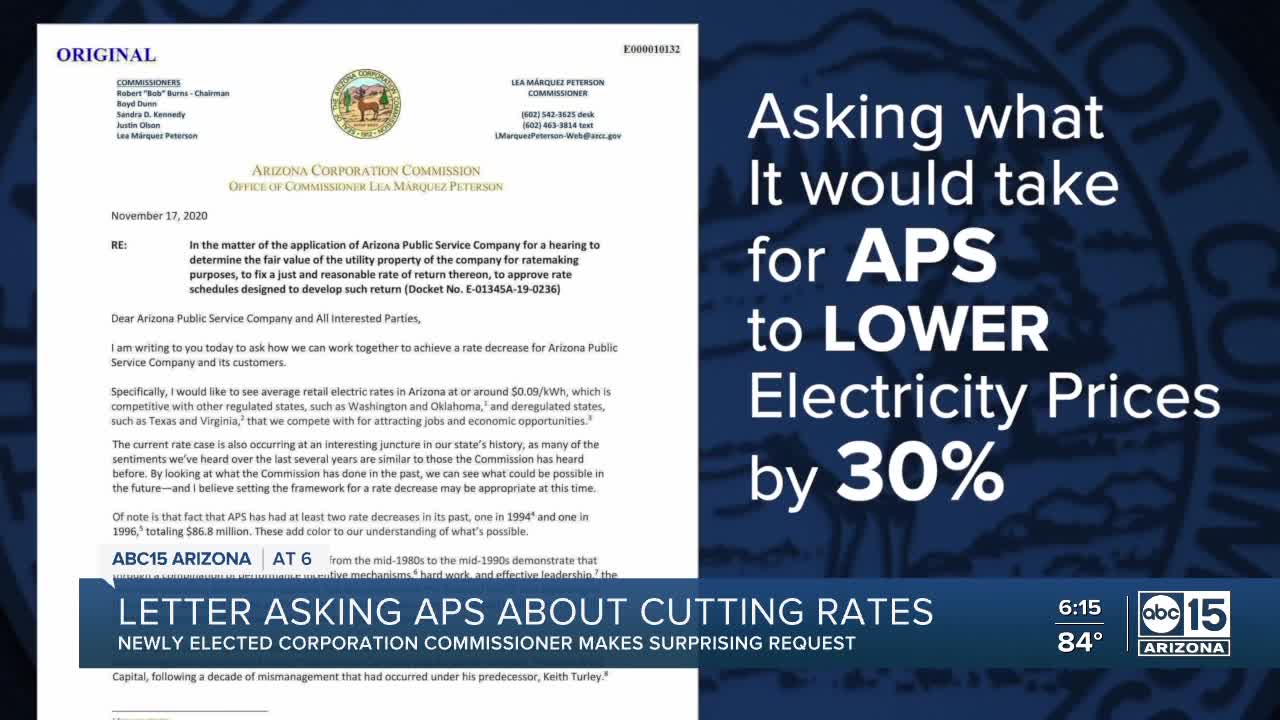 Arizona utility regulator Lea Marquez Peterson wants to know what it would take to lower electricity rates in the state by nearly 30 percent. In a letter docketed on Tuesday she told Arizona Public Service (APS) the state's largest utility, "I am writing to you today to ask how we can work together to achieve a rate decrease for Arizona Public Service Company and its customers." PHOENIX — Arizona utility regulator Lea Marquez Peterson wants to know what it would take to lower electricity rates in the state by nearly 30 percent.

Specifically, she wants the company and stakeholders to come up with a plan to reduce Arizona's average kilowatt-hour to nine cents, which she says is more in line with states that Arizona competes with to attract jobs. Arizona's current average is "13 or 14 cents," according to a press release from Marquez Peterson.

"What I'm hoping is that I'll receive a lot of data, information letters from the public, from stakeholders involved in the rate case now, from APS, who will give feedback on some of the different ideas that I proposed in the letter, and other ideas that they may have really starting the conversation," she told ABC15.

The company is currently involved in a rate case for which it had originally asked for an additional $184 million increase. It recently modified that request to $169 million.

Marquez Peterson points to two past rate decreases in 1994 and 1996 that were realized through six rates cases over ten years which she attributed to "performance incentive mechanisms, hard work, and effective leadership" at the time.

The letter also asks that the company explore several options including new rate design, attracting new businesses to APS service territory, and has a particular focus on performance incentive mechanisms or PIMS. She described that as "creating a rate-based system that incentivizes utility to hit certain goals or to hit to go in certain directions that the Commission has determined."

In November, Marquez Peterson - a Republican - won her seat on the Arizona Corporation Commission, after being appointed to the five-person board by Governor Doug Ducey in 2019. The commissioner says she intentionally waited to release her data request until after the election.

"It had been on my mind for a while, but during a campaign season didn't seem appropriate to put something like that forth. It's why I waited for after the election and kind of the dust to settle," she said.

APS' response will likely be issued through the docket with spokesperson Jill Hanks telling ABC15, "This is an active case where perspectives and positions on our application and our responses to them are being managed through the regulatory process."

Diane Brown with Arizona Public Interest Research Group, a consumer advocacy group that intervenes in rate cases told ABC15 that the commissioner "is challenging APS and intervenors to put ratepayers over shareholders." Brown says the letter sends a "strong signal to other utilities in Arizona and across the nation that ratepayers really are the ones that need to benefit when it comes to overall rate cases."