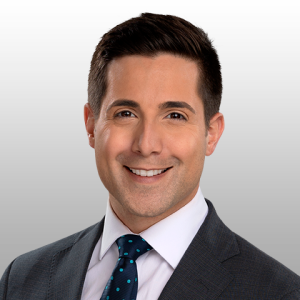 Ben Lesser, a 94-year-old Holocaust survivor, is speaking in Chandler, but before his speaking engagement, he spoke to ABC15 for a poignant conversation about spreading a message of love.

CHANDLER, AZ — Ben Lesser, a 94-year-old Holocaust survivor, is speaking in Chandler Wednesday night, but before his speaking engagement, he's sitting down with ABC15's Nick Ciletti for a poignant conversation about the lessons learned and spreading a message of love.

At just 11 years old, Lesser would enter his first of four concentration camps, describing the hellish conditions in each.

"We heard the screaming and yelling," Lesser explains. "They had the fiery pits. And they were throwing in children and adults into these fiery pits alive."

Lesser says even the journey between concentration camps could be deadly, including what's widely known as a "death march" from Auschwitz. Ben says his march lasted for seven weeks and 300 miles.

"They called it the death march because if you could not keep pace with the soldiers, they simply shoot you."

There were also train rides where 80 people would be crammed into one car with no bathrooms, and oftentimes, no food or water.

Lesser remembers one train ride where all he had was one loaf of bread to share with his cousin - it had to last them three weeks.

"We had one loaf of bread between us. I would ration it out. And it lasted us two weeks. This train kept going for another week without food or water. Everyone around me is dead."

Lesser says of the 80 people on the train, only four would survive, including him and his cousin.

Eighty years later, Lesser certainly has not forgotten the trauma he experienced in the Holocaust and he wants to make sure no one else does either. He started the Zachor Holocaust Remembrance Foundation, helping create curriculums for schools to use and educating people all over the world.

"Zachor" is the Hebrew word for "remember."

Lesser says with the uptick in antisemitic hate crimes, his organization's work is more important than ever.

"Every time I read about one, I get a jolt in my heart. My God. What's going on?"

We did some digging and found out that Holocaust education is required in at least 20 states, including Arizona.

Just last year, Governor Doug Ducey signed a bill into law requiring students to learn about the Holocaust and other genocides at least twice between 7th and 12th grade.

Lesser says teaching the lessons of love in the face of hate will help change minds and open hearts, even if it's just one person at a time.

"Hitler and the Nazis did not start with killing. It all started with hate. The hatred has to stop. Why hate? Love and hate are both contagious. So choose love."

For more information on the Zachor Foundation, click here.