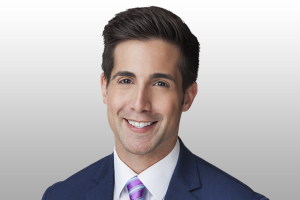 Nick Ciletti is a five-time Emmy award-winning journalist who joined ABC15 in July 2014. Currently, you can catch Nick every weekday anchoring ABC15 Mornings from 4:30 a.m. to 7 a.m.

As an anchor, Nick has helped walk viewers through some of Arizona's most historic and impactful moments, from a statewide teacher strike to the passing of Senator John McCain.

Nick is also dedicated to his work in the field.

He exposed a Valley attorney who was caught on jail surveillance physically abusing an inmate. He won an Emmy for his reporting at the deadly Independence High School shooting where he interviewed concerned family members live with his iPhone. His reporting from Mexico put a human face to the immigration crisis, where he profiled a Valley father who had just lost his appeal for asylum.

Nick has also reported on some of biggest stories that have shaped our nation.

He traveled to Florida to cover Hurricane Irma, one of the strongest storms ever recorded in the Atlantic. He also reported from the front lines of the deadly Woolsey Fire in southern California, showing how Arizona fire crews were helping in the fight. Another story took Nick to Selma, Alabama and the steps of the historic Edmund Pettus Bridge to share the story of a Valley veteran who witnessed the brutal Bloody Sunday attack.

Nick is a graduate of the University of Miami's School of Communication, majoring in Broadcast Journalism and Spanish. He also holds a certificate in U.S. Immigration Law from American University and is currently working on his master's degree online from the University of Southern California's Gould School of Law.

He also spent a semester in Buenos Aires, Argentina and is fluent in Spanish.

As a cancer survivor, Nick loves to give back. He's volunteered at Phoenix Children's Hospital since 2016, and has participated in the American Cancer Society's Relay for Life since 2010.

Nick loves spending weekends with his French Bulldog rescue, Larry. He's an avid traveler who enjoys a good hike in the Arizona sun and spending time with his two nephews.