How will Arizona pay for unemployment?

Federal benefits will run out soon 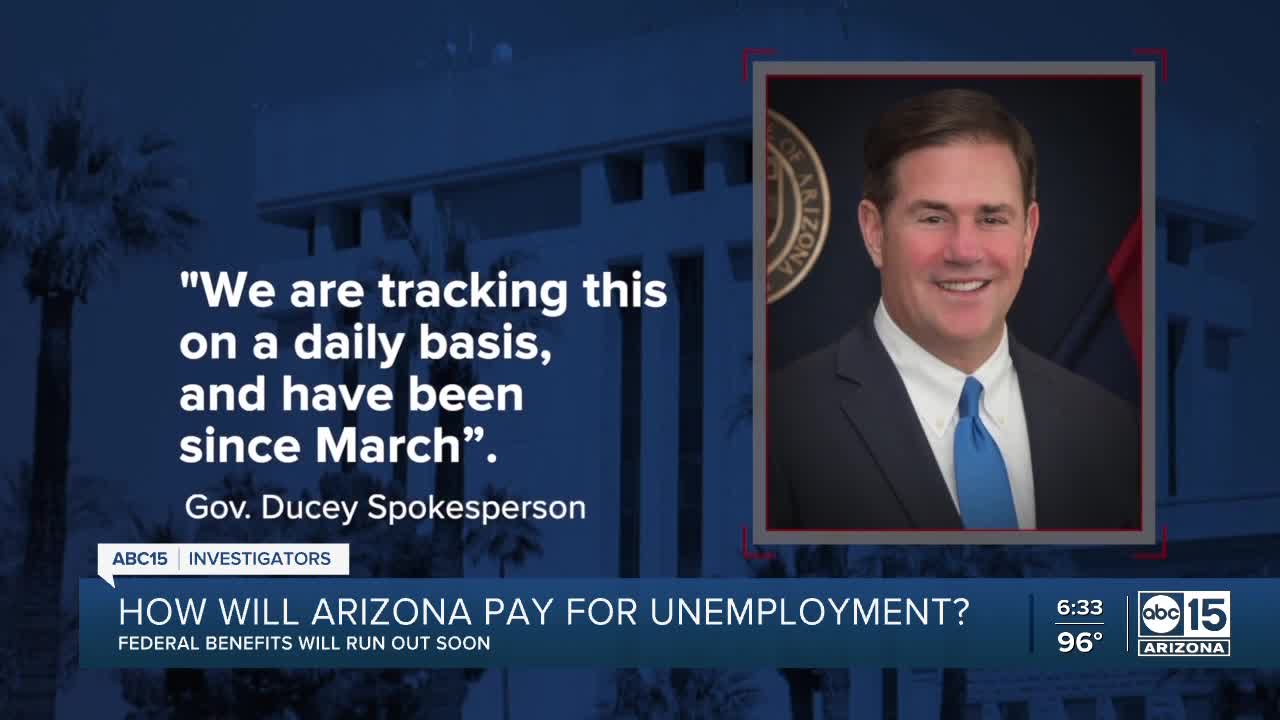 Federal benefits will run out soon. 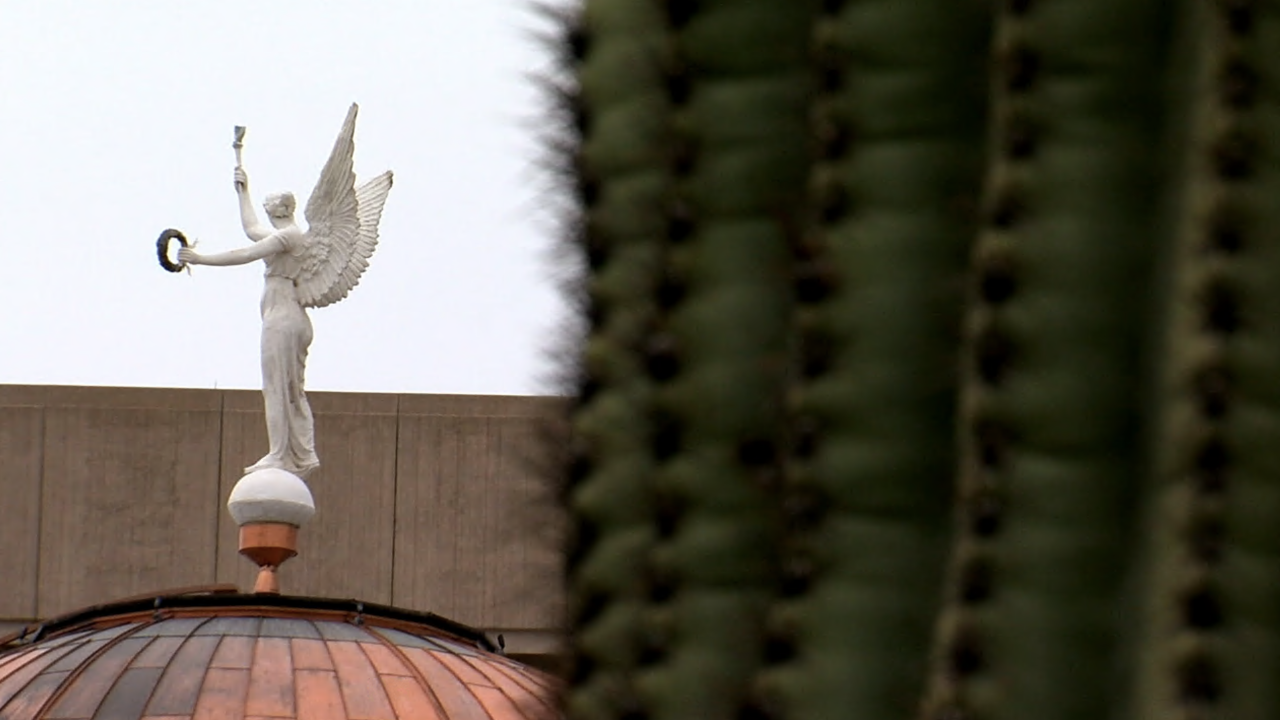 PHOENIX — Arizona is running out of unemployment money.

Lost Wage Assistance (LWA), which has provided $300 additional dollars a week since August 17, is on track to run out in the next two weeks according to the Arizona Department of Economic Security (DES).

The agency also says the trust fund that supplies money for the regular unemployment insurance program is down to about eight weeks of payments in the bank.

Governor Doug Ducey has called on Congress to work out its differences and get a deal done. Instead, members took a month-long recess in August. Members returned on September 8, and ABC15 reached out to several for comment about the failure to find a consensus to extend unemployment benefits. ABC15 is publishing their statements in full.

“Twice, I have called on my colleagues to pass a short term extension of expanded unemployment benefits while negotiations continued. Over and over, Chuck Schumer and Senate Democrats refused to support this commonsense solution and denied Americans out of work the ability to pay rent and put food on their table. I’m pleased to see the Senate will vote this week on a targeted relief package that will provide an extra $300 per week in federally funded unemployment benefits. I call on all members of the Senate to support it."

"Arizonans who have been laid off or had hours reduced because of the coronavirus need immediate and sustained support. The hurdles and bureaucratic delays facing Arizonans are unacceptable. Senator Sinema has urged Congressional leaders to continue enhanced unemployment insurance—and take more action to support Arizona businesses and families—and has urged state leaders to raise unemployment benefits. Senator Sinema’s team works every day to help Arizonans get the resources they need and all Arizonans should contact our office at Casework@sinema.senate.gov for assistance, including with Unemployment Insurance claims.

“This is of great concern to me. The White House has offered numerous times for a stand-alone extension of resources, and I am pleased to see Senate Republicans will be moving forward this week with a solution. We can only hope the stalling from the Speaker and House Democrats will be brought to an end before these resources lapse again.”

“We’re still in the middle of a public health and economic crisis that has killed nearly 200,000 Americans and left tens of millions out of work. For months, struggling Arizonans have relied on benefits to stay afloat, but the scale and severity of this crisis has strained an already weak system.

We saw this coming. That’s why the House acted in May and passed the HEROES Act to extend federal unemployment benefits through the end of the year. Yet the Senate has repeatedly refused to hold a vote on this bill, or work in good faith to negotiate another emergency relief package.

The Senate’s failure to act is inflicting enormous, unnecessary suffering on hardworking families. Enough is enough. Congress must do what we’ve done four times now—come together in a bipartisan way to provide relief.

Arizona’s governor and the State Legislature must also be a good partner in weathering this crisis, as Congress has. Enhanced federal benefits can only help so much, as our state offers $240 per week--the second lowest in the country and far below the national average. This is not enough to pay for rent and not nearly enough for anyone to live on--let alone live the quality of life every Arizonan deserves.”

“Trump’s failed leadership has put the economic security of millions of Americans at great risk. It’s also been more than 100 days since the House passed the Heroes Act to provide economic relief for families who are suffering, and the Republican Senate refuses to take it up. Meanwhile, Ducey refuses to remedy the fact that Arizona has the second lowest state unemployment benefits in the country. Their collective inaction is putting American lives and livelihoods at stake and the longer they delay, the bigger the consequences. Democrats are sitting at the table, waiting to negotiate. It’s long past time for Republicans to join us.”

“I support extending the $300/week federal unemployment assistance to Arizonans through the end of the year, as is being proposed by Senate Republicans. When combined with the state's assistance, it will help people who were laid off through no fault of their own. I encourage Republicans and Democrats to work together to help all Americans. I remain hopeful that Speaker Pelosi will come back to the negotiating table for the sake of our nation.

“While hundreds of thousands of Arizonans are facing an unemployment crisis, the Senate and White House have obstructed real solutions. The House passed the Heroes Act back in May that would have extended unemployment benefits through the end of the year. It’s been more than 100 days and sadly more than 100,000 people have died from COVID-19 since then. These benefits are necessary to keep people safe, they are a lifeline for Arizona families, and Arizonans can’t afford to wait while the White House and the Senate play politics with their livelihoods. It’s time for the Senate to pass the Heroes Act and President Trump to sign it.”

“During the coronavirus pandemic, countless hardworking Arizonans have lost their jobs through no fault of their own. The CARES Act was signed into law in March. Within the package were clear end dates for many of the programs on which American families now rely, including increased unemployment benefits. In May, I voted to pass the Heroes Act, a new bill that would have extended CARES Act federal unemployment benefit changes through January 31, 2021 and provided an additional one-time $1,200 stimulus payment to individuals who qualify. Yet, with 30 million Americans still unemployed, the Senate—wherein the House-passed Heroes Act sits idle for over three months—adjourned for their August recess without passing additional legislation to aid working families. I’ve called again and again on Congressional leadership to bring members back to Washington to debate and pass a new bill for struggling Americans. This is unacceptable.”