Valley protest organizers explain what they'd like to see 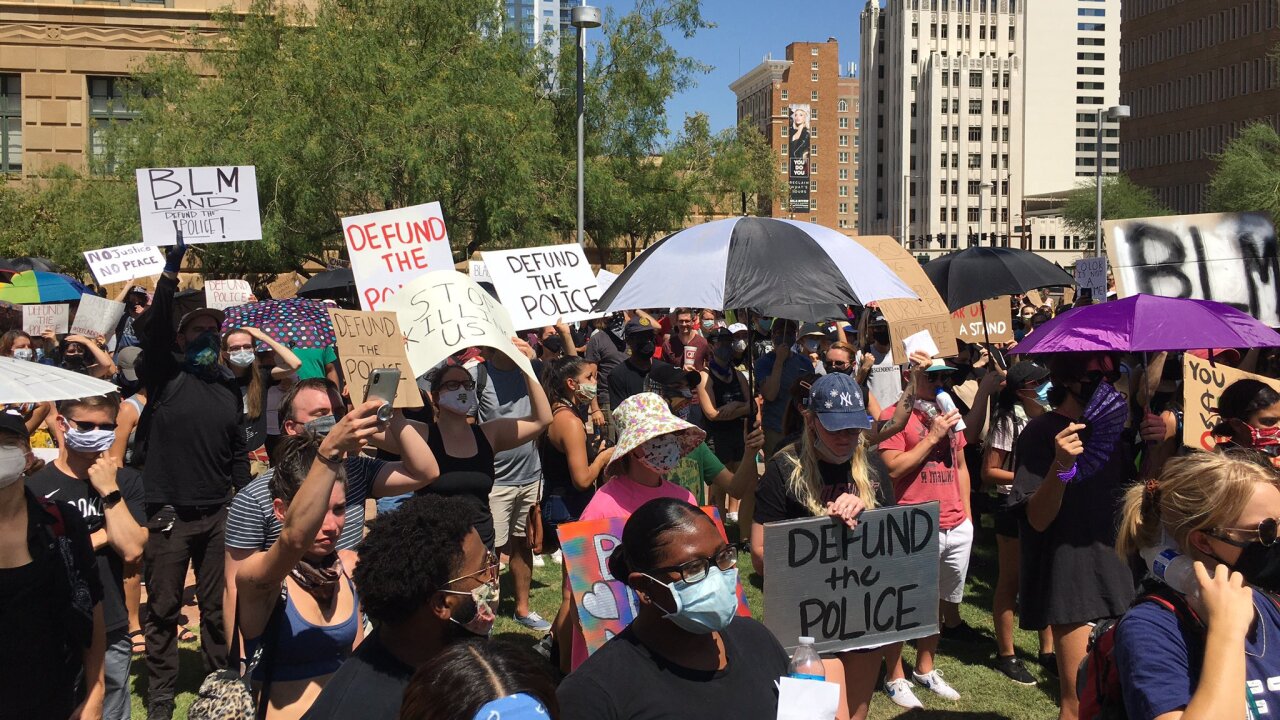 Since the deaths of George Floyd in Minneapolis and Dion Johnson in Phoenix, protesters have been taking to the streets to demand justice, transparency, accountability and change in how Black and Hispanic communities are policed.

ABC15 reached out to protest organizers and community activists to find out what they believe that change should look like. ​

For the past week, every day at 5 p.m., a group of protesters gather in downtown Phoenix to march, chant and demand an end to police brutality. ​

Ethan Turner of Phoenix, with W.E. Rise Project is one of the organizers of the marches. He says the group, which was recently formed after the death of Floyd, is still developing its demands for Arizona government officials. But leaders have already decided that police oversight is a major priority in light of the approval of funding of the Phoenix Police Civilian Review Board on Monday.

Turner says W.E. Rising also supports partially defunding police departments. ​"It's not a complete defunding. I know a lot of people are asking how much? We're still looking through budgets," he said. ​

The dollars would be moved from police to implement social, mental health and job services in communities to prevent crime in the first place. ​

It's an initiative Tremikus Muhammad with Phoenix Local Organizing Committee for Justice or Else (PHXLOC) also supports. ​

"Do what's needed to be done to repair human beings that's been broken," he said. "Not come in with your vest on, and your baton and your AR-15 as if you're dealing with animals in cages."​

PHXLOC is also a part of protests that are calling for transparency after Johnson was shot and killed by DPS when his car was parked on the Loop 101 on Memorial Day.

Kenneth Smith of Glendale is an educator who says he organized a march in order to not feel helpless. ​

"My goal was not to sit and feel victim to the media and what was happening on TV and have to keep seeing that video over and over again about a person that looks like me dying," he said.​

On Friday, he says at least a thousand protesters showed up to march from the Japanese Friendship Garden to the Arizona State Capitol. But he says the march was only the beginning. ​

"The goal is to have oversight and education," he said. ​ And by education, he means college.​

"We want to have the right hiring criteria for police officers," he said. "Right now a beautician has more hours of training than a police officer when they first start."​

Smith says adding college credits as a requirement would put police on the same playing field as other professions in which the well-being of those being helped is important.​

Smith is also calling for civilian review boards in every police agency in the state. Something that would require legislation and the signature of Governor Ducey who some faith leaders think does not know what systemic racism is.

"We need him to know that this is real in Arizona. And if he wants to be the Governor of all of Arizona, he needs to listen to all his people," Smith said.​

Smith has a petition outlining each of his group's demands. You can sign it here.