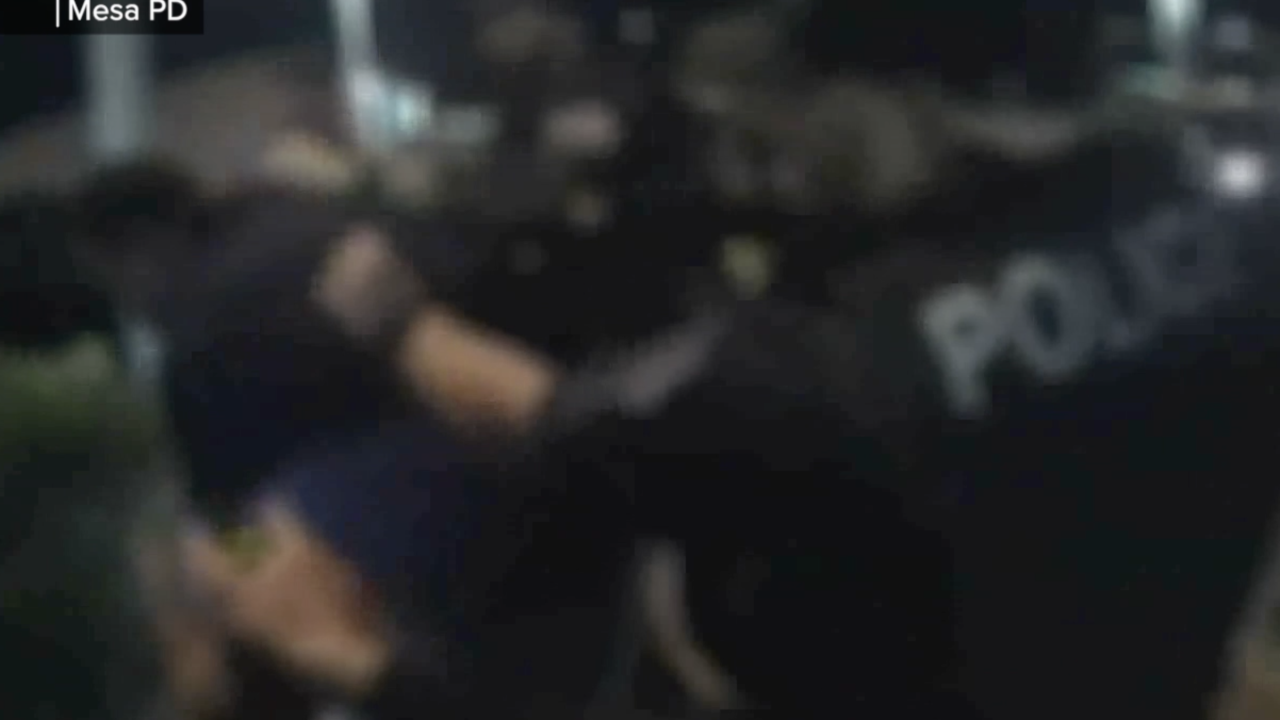 MESA, AZ — Newly released Mesa police video shows how then-Officer Nathan Chisler shot an unarmed man at point-blank range when responding to a cantina about a dispute with customers in December 2019.

Mesa police announced Monday that Chisler was fired, days after the Maricopa County Attorney's Office filed a criminal aggravated assault charge against him.

Video from multiple officers' body-worn cameras shows several angles of the police response. ABC15 just received the videos, a police report, and internal emails about the shooting. Our initial public records request was made six months ago. The Mesa Police Department purposely blurred the entire video, making it harder to see the details, prior to release.

Officers encountered Randy Sewell, 45, and some friends in a parking lot after employees at Ojos Locos Cantina called police. The staff members said the foursome was being argumentative and was asked to leave.

Officer Leticia Angulo initially told Sewell, "They want you trespassed from the property. It doesn’t mean that that’s a charge on you." When the officer asked for Sewell to identify himself, he refused, saying he didn't have to by law. Arizona law only requires people to identify themselves by name to police if they are suspected of a crime.

However, when Sewell tried to walk away from a second officer, that officer ordered him to stop and grabbed Sewell.

"I see no justification in this video for why they need to escalate that situation that quickly and that aggressively for someone who is just asserting his rights," said Jared Keenan, an ACLU Arizona criminal justice attorney.

Officers, then holding Sewell at Taser-point, tell him to put his hands behind his back several times. He complied but moved as another officer put hands on him. This escalated to several officers grabbing Sewell, who weighed approximately 375 pounds, to pull him to the ground. In about ten seconds, one offer fires his Taser and Chisler also shoots Sewell with a gun from behind.

Chisler utters a swear word after the shooting, but he holsters his gun without telling the other officers he fired it. It takes minutes before officers identify the gunshot wound on Sewell. In the meantime, they struggled to get the man in handcuffs and yell at him to stop resisting. Sewell can be heard screaming in pain as officers move him.

According to the police report, Chisler told investigators because of "the motion of his [Sewell's] hands in the waistband area ‘where weapons are commonly carried’, and the suspect crouching over, he determined there was a threat and he responded according to his training and experience."

Chisler also told investigators, "Randy Sewell was throwing the two officers on the south side of him into a light pole." However, that account doesn't match the video. Sewell is seen grasping the light pole with one hand. The other hand swings away from his body just before he is shot.

Jeff Hynes, a former Phoenix police commander who testified in other cases as a use-of-force expert, explained Chisler's actions were not in line with police practices. Hynes said Chisler should have holstered the gun prior to grabbing Sewell.

"When he went hands-on and the weapon discharged there is no way around it," Hynes said. "You blew it."

Sewell had a broken femur and required surgery. He was quickly charged with several crimes including aggravated assault on an officer. His case is pending. He had no prior criminal convictions.

In June, the county attorney has also charged then-Officer Chisler with aggravated assault.

Hynes said officers have a choice whether to approach a call in a "soft" way or a "hard" way. He said the officers on Sewell's call chose the hard way.

"When you force a confrontation with somebody that’s been drinking to excess, they don’t comply," Hynes said. "They don’t listen attentively. They don’t do what they’re told, and then the officers take it to the next level. When you do that, outcomes like this happen."

Chisler was involved in a prior officer-involved shooting in April 2015. Internal police department emails show he failed to show up at a required mental health appointment after the Sewell shooting. The emails also show he was "reassigned" to non-police duties when he was cleared to returned to work in March. Chisler was terminated earlier this week.