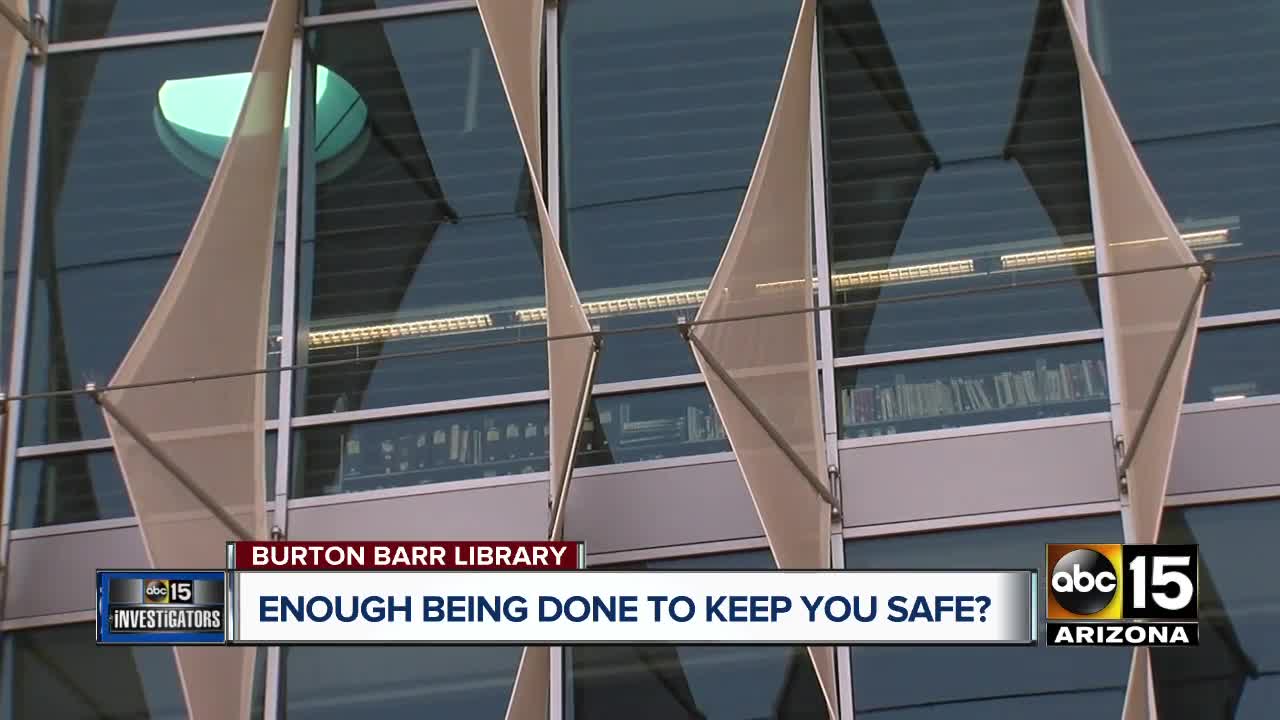 City and library records show there have been nearly 1,000 police calls for service at the library and the area immediately nearby since late 2015. 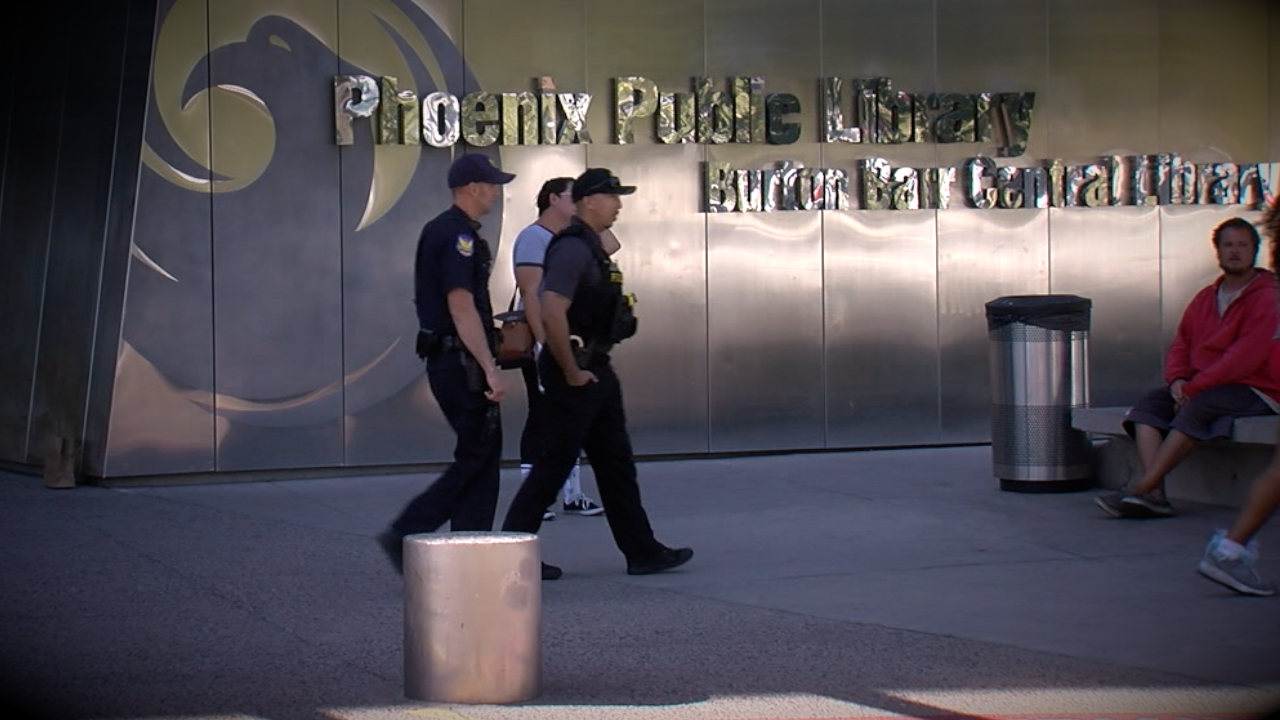 On January 5, a wanted felon and sex offender walked into Phoenix’s biggest and busiest library with a gun.

It was a Saturday just before 2 p.m.

After yelling threats and racial slurs, Cedric Broger slapped a Burton Barr Central Library staffer and then pulled a 9mm handgun from his waist as security attempted to get him to leave, records show.

One person recorded a minute of the chaos with their cell phone camera.

The video shows people screaming and scrambling for safety as security officers wrestle with Broger in a glass elevator.

No one was shot.

One of the officers gripped Broger’s hand holding the gun and kept him from raising it and shooting, records show. A good Samaritan eventually helped disarm Broger as security kept him restrained before police arrived.

An ABC15 investigation discovered this incident is just one of hundreds of police emergency calls to the library in recent years, records show. There’s been hundreds of additional calls for medical and fire responses.

Police and internal library security records show violence, sex crimes, and other dangerous behavior are routine inside Burton Barr and the immediate area around the library.

While reporting this story, I was also surrounded and threatened by a group of men - one of them armed with a large knife.

The city’s head librarian, Rita Hamilton, did not make herself available for an interview. But a spokesperson said the city believes that Burton Barr Library is safe.

However, a recently-retired police sergeant, who oversaw patrols in the area, disagrees and said he wouldn’t let his family come to Burton Barr.

“No, and that’s because it’s not safe,” said Phil Roberts, who retired in June after 33 years with Phoenix police. “I mean, I love Phoenix. I was born here… But the area right around here, no. I would not (let them come here).”

It is Phoenix’s biggest and busiest library; it spans 280,000 square feet and averages about 2,000 visitors a day, according to city officials.

But it also averages many police and medical calls.

Phoenix Police Department records show officers have responded to at least 900 calls for service at the 1200 block of North Central Avenue since November 2015. The number of calls does not include self-initiated officer calls or fire and medical responses, which adds hundreds more calls to the total.

“We would get an emergency call out here every single day,” Roberts said. “It fluctuates. But I would tend to say it’s actually on the increase – worse now than in the past.”

During the past five years, the nature of the police calls reveal the dangerous and violent type of incidents officers find when they arrived:69 assaultsAn additional 106 fights130 thefts, burglaries, or robberies
There were also nearly two dozen sex crimes, multiple stabbings, several drug and alcohol overdoses, and even a mass shooting threat in late 2015.

The total number of crimes and emergency calls would be even higher during the past five years, considering the library was closed for nearly an entire year from July 2017 to June 2018 because of damages suffered during a monsoon storm.

Roberts said it is important to look at the library and park as a whole because the safety and security problems are connected.

“99 percent of the problems out here are related to homeless and transient population issues,” he said. “The park is a staging area. They will go to deal drugs there, do all sorts of illicit crimes there, there’s alcohol issues.”

The problem isn’t new and is one the city has identified and struggled to address for more than a decade.

In a 12-page city memo written in 2005, police officials highlight and discuss complaints about the library’s unclean and unsafe environment. The memo also states that city officials sampled a group of chronically homeless who congregate at the library and found that 35 percent had outstanding warrants.

Broger, who brought the gun into the library this year, also had multiple warrants from previous incidents. It’s just one example of how much of a 14-year-old memo is still relevant to the issues today.

SECURITY AT THE LIBRARY

The city won’t share other specific security plans, how they allocate resources, or how many security officers work at a given time. But in an initial written response, library officials called their security “robust” and in line with best practices at libraries across the country.

A week after sending the initial response, library officials told ABC15 in an interview they now have a sworn police officer assigned to the building for the first time.

According to a city memo, there was a September 13 agreement for the police department to begin providing an off-duty uniformed officer on-site for up to 40 hours a week.

The officer is not a guaranteed presence but has been at the library for the full amount every week since the agreement began, officials said.

The memo stated a city security assessment recommended adding the officer, but other projects may take precedence and off-duty officers are not always available. The city won’t release information about the days and times the off-duty officer works because officials consider it “sensitive security information.”

[During several different days while reporting this story, ABC15 journalists did not see a sworn officer at the library. The first time ABC15 saw an officer was the day after its reporter was threatened by a group of men outside the building and reported what happened to the city.]

The library does not have metal detectors.

When asked what would stop an armed convicted felon and sex offender from walking into the library with a gun like the incident in January, the library spokesperson said that was actually a successful example of the building’s security processes working correctly.

“Let me be clear, we did stop that,” Franklin said. “Our processes and practices and how we approached that, everything worked that day.”

When asked if Franklin could blame someone who witnessed the incident if they didn’t feel safe enough to return to the library, she said she hoped they would.

“I hope that they would because again that was a situation where everything in place worked,” Franklin said.

In addition, ABC15 learned that the library does not permanently keep surveillance video of critical incidents. Instead, they purge the footage after 30 days.

For that reason, ABC15 was unable to obtain video showing many of the significant safety and security risks at the library. But on paper, library officials do document significant issues in a collection of records called “customer behavior forms.”

The forms show the library has issued a suspension or permanent ban at least 130 times since 2014.

The records reveal deeply disturbing behavior inside the library. In some cases, people who commit sex-related and other crimes are only temporarily suspended.

“The level of corrective action determined is based on the nature of the violation of the conduct and behavior expectations outlined in the applicable policies,” according to a written response from library officials.

The library’s policies list standards of conduct inside and outside the building. On multiple days, ABC15 journalists found blatant and open violations of those policies.

ABC15 also discovered the library’s security either missed or didn’t document a 2014 incident involving a woman who filmed a pornographic video inside the building.

ABC15 found the video by reviewing online comments on a Facebook page for the Burton Barr Library.

One person wrote an online review for the library, stating that a woman records pornographic shows in the library.

A simple internet search reveals a four-hour video showing a woman sitting at a library desk repeatedly exposing herself and engaging in sexual acts.

The video has been posted on at least one major pornography site for five years.

On October 23 just before 11:30 a.m., ABC15 investigative reporter Dave Biscobing was surrounded and threatened by a group of men on the southeast corner of the library building.

For one of the last steps in the reporting process, Biscobing was taking photos of the building and surrounding area. Three men surrounded him and demanded to look at the photos, thinking there were pictures taken of them.

One of the men had a large knife with a brass-knuckle grip openly displayed in a holster on his hip. He did not pull the knife out.

Biscobing presented his photos to the men, showing that he did not take a photo of them.

But one of men, who was drunk and belligerent, refused to believe him, screaming and threatening Biscobing for more than three minutes. At times, the man physically pressed his face to Biscobing’s while telling him he would not let the journalist leave and that he was going to assault him.

Eventually, one of the other men separated the screaming man, who walked away yelling that he would “take (Biscobing’s) (expletive) face off.”

Biscobing was able to record audio of the last minute of the tense situation and library security cameras a few feet captured video of the entire incident.

No library security staff noticed or responded to the incident. In response, the spokesperson provided a surprising take on the incident.

“You know there were city resources and city presence that immediately or very quickly intervened,” Franklin said. “I mean you had access to someone intervening and helping.”

The city resources and presence Franklin is talking about was a single ground crew foreman, who walked over to Biscobing 30 seconds after the confrontation ended to see what was going on.

No one quickly or immediately intervened.

Roberts, who was interviewed by ABC15 a day after the incident, said what happened is not a fluke and that ABC15’s reporting is not “blowing something out of proportion.”

“Not at all,” he said. “That stuff happens all the time down here. Officers respond out here all the time.”

And despite the library official’s insistence that Burton Barr is safe, Franklin did admit during an interview that the library would like more help.

“Yes, the library wants to do more in the community, and security would help us do that,” she said.