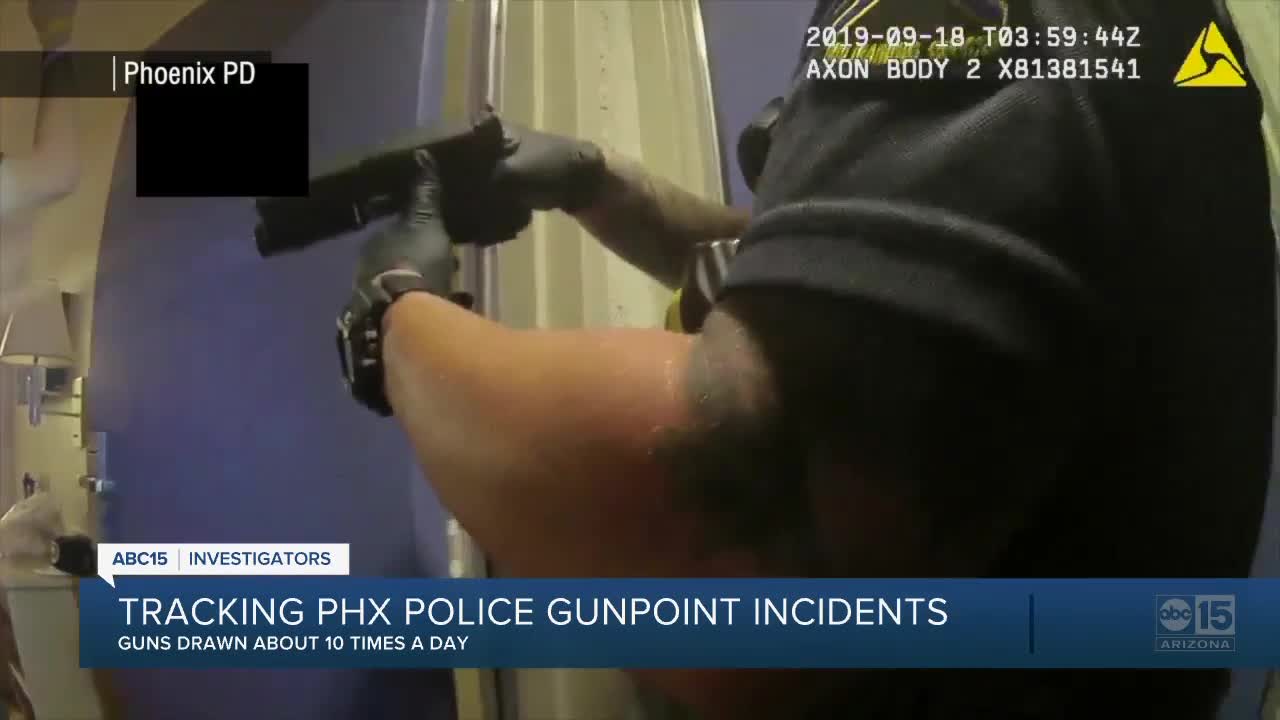 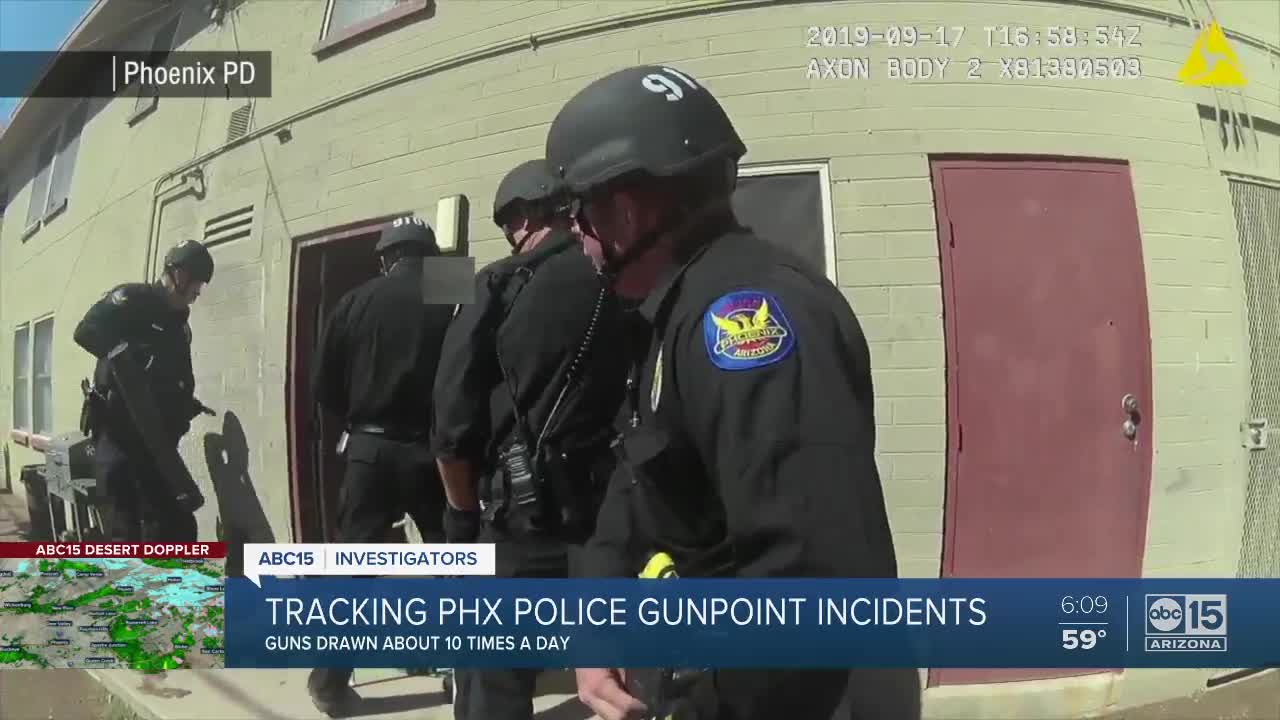 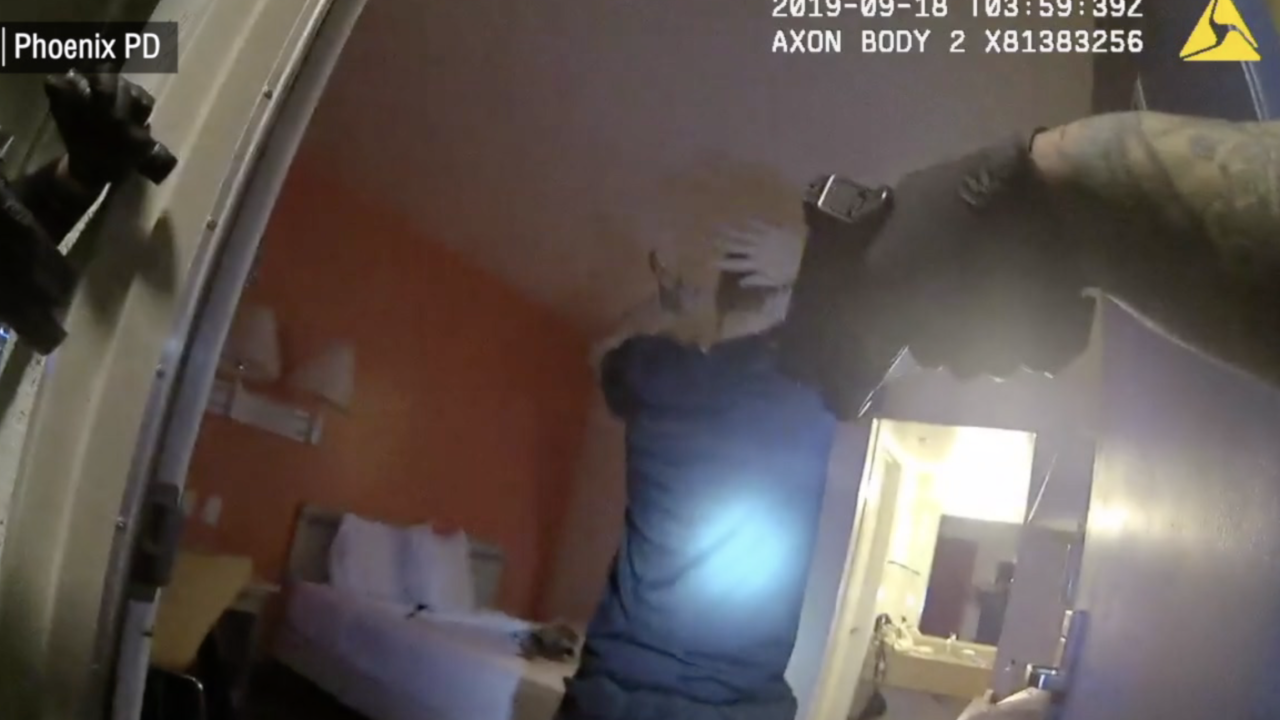 PHOENIX — New data shows Phoenix police held more than 1,300 people at gunpoint during a three-month period. Phoenix police started requiring all officers to report when they draw their firearms and point them at people in August.

Supervisors review the reports and body-worn camera video of all these incidents. A consultant recommended the reform after studying potential causes of the record number of officer-involved shooting incidents in Phoenix in 2018.

ABC15 has received data about all pointed gun at person (PGP) incidents from September 1 to November 30. In that time frame, Phoenix police held more than 1,300 people at gunpoint. They averaged 10 gun-pointing incidents a day, with some incidents involving multiple subjects.

In many cases, officers took their weapons out while executing search warrants, stopping stolen cars, or arresting suspects in violent crimes. However, some PGP incidents involved no crime or investigation at all.

"If there are people inside the community who think it's over the top, sorry, you have not done the [police officer] job," said retired Phoenix police officer union leader Ken Crane.

Crane said officers draw their weapons in less than one percent of calls for service.

"We know in the police world, action beats reaction," Crane said. "If a bad guy has a gun, you better have yours out if you want to win the fight."

Most of the PGP incidents involve people who are Hispanic or Black; however, the percentage has decreased over the three months reviewed by the ABC15 Investigators.

"You are using force; you are using intimidation tactics," said Viridiana Hernandez with Poder in Action, which has spoken out against police violence. Both Hernandez and Crane also sit on the Phoenix Mayor's Ad Hoc Committee that reviews suggested police reforms.

Hernandez said she believes officers police poor and ethnic neighborhoods differently than other neighborhoods, leading to the racial disparity in when officers draw their weapons.

"The cops don't pick and choose that," Crane said. "They go out and respond. They take the calls. It is what it is."

Crane does support collecting the PGP data, in part to identify officers who draw their firearms much more often than their squad-mates.

"We need to get into the weeds, get down to the granular level," Crane said. He said doing some research could identify is there are lapses in some officers' training.

Phoenix police do not have a specific written policy about when it's appropriate to put someone at gunpoint.

At least five other big cities, Chicago, Dallas, Baltimore, Cleveland, and New Orleans, do have specific policies on when officers can display their firearms. Unlike Phoenix, most of the cities also classify display of a firearm as a reportable "use of force."

New Orleans' policy said, "Officers shall not draw or exhibit a firearm unless the circumstances surrounding the incident create an objectively reasonable belief that a situation may escalate to the point at which lethal force would be authorized."

Cleveland's policy is nearly identical. Dallas police also allows officers to draw firearms when there is a "threat to life" of a "reasonable fear" for people's safety.

In a four-page policy, Chicago also instructs officers to consider the "reasonableness" of their actions. Baltimore's policy even warns "unnecessarily drawing or exhibiting a firearm may limit a member's alternatives in controlling a situation, create unnecessary anxiety on the part of citizens, and/or result in an unwarranted or accidental discharge of the firearm."

"You need to call it what it is. You are using force," Hernandez said. "You are using intimidation tactics, and we need to regulate when you get to do that, why, under what circumstances."

Crane has a different take.

"Those are administrators that are trying to pander radical activists in their communities, and what they're going to do is get cops killed," he said.

Phoenix police leaders told ABC15 they are still in the monitoring phase. They want more data and information about these gun pointing incidents before they would consider any change.