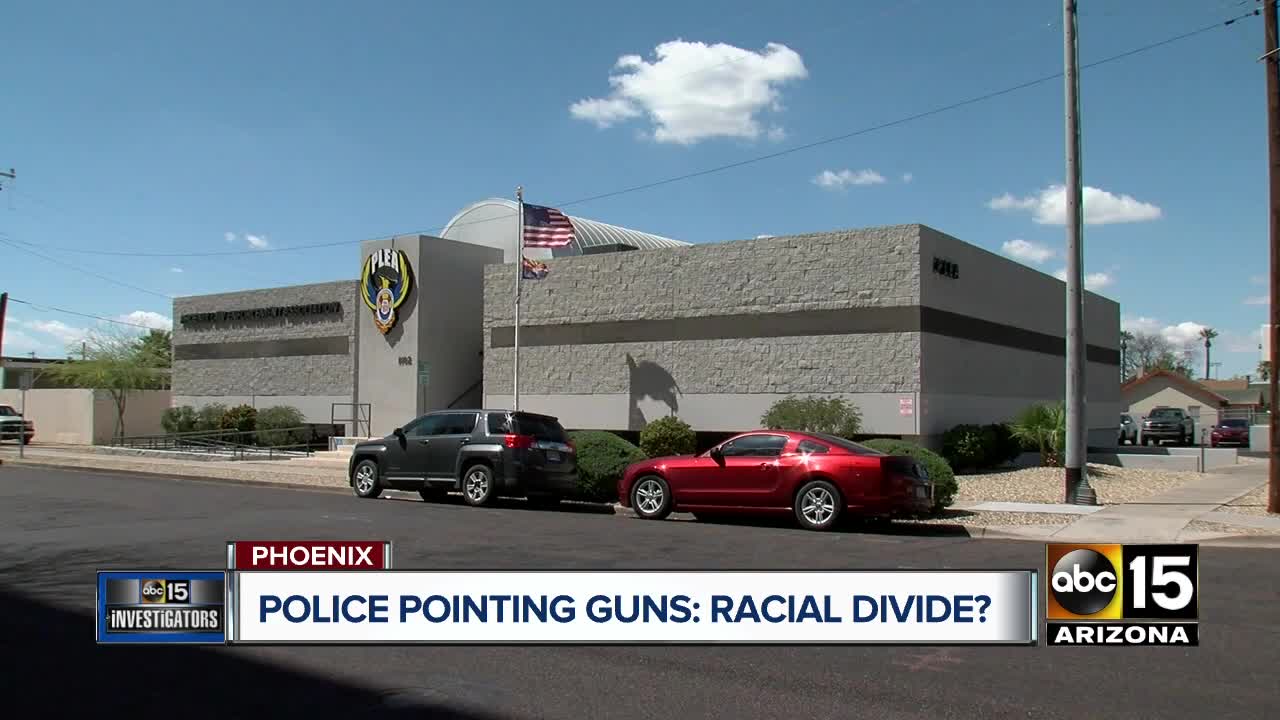 New data shows Phoenix police hold hundreds of people at gunpoint a month, and those people tend to be young, male, and people of color.

PHOENIX — New data shows Phoenix police hold hundreds of people at gunpoint a month, and those people tend to be young, male, and people of color.

The ABC15 Investigators looked at the data, some videos and reports from September. That was the first full month when Phoenix patrol officers were required to wear body cameras and report every time they pointed a gun at a person.

"When a gun is pointed someone, that's a traumatic event," said Police Chief Jeri Williams in August. "We want to articulate that. We want to document that." Running an accountable, transparent organization, she said, means they are "willing to share what we do and how we do it."

The gun and video policies were implemented after public outcry about the Ames-Harper excessive force case. The suspects were an unarmed black family accused of stealing a doll from a Dollar Store. Viral video showed Phoenix police pointing a gun at them, yelling, and kicking.
Of the 318 total PGP (pointed gun at person) reports, the more common crimes involved aggravated assault, stolen vehicles, and drug incidents. Many involved petty crimes. At least 50 of the reports did not involve any crimes. Sometimes a report involved multiple people held at gunpoint.

Of the 457 people held at gunpoint, 77 percent were people of color.

The most significant disparity was for black people. They were involved in 24 percent of PGPs. By comparison, the U.S. Census Bureau estimates 7 percent of Phoenix's population is black, and 20 percent of people arrested by Phoenix police in 2018 were black.

"Their perception is of black men being more of a threat than everyone else," said committee member Janelle Wood. "Our children should not have to carry someone else's bias. They have to behave a certain way because you're fearful of them."

"Race and interaction with police matters on whether they're gonna pull a gun out, whether they feel and perceive you as a threat, and who then ultimately gets shot," said committee member Viridiana Hernandez.

In fact, police data shows 65 percent of the people Phoenix officers shot since 2017 were also people of color. Police said nearly all the suspects also had weapons.

Earlier this month, ABC15 asked the President of the Phoenix Law Enforcement Association whether there was a racism problem in the department.

"Absolutely not," said Michael "Britt" London. "That's what they do to every department. "Racist. Systemic. Do you have these key buzzwords that they always use?"

"We need to contextualize what that data really means," Kurtenbach said. "What type of calls, were they looking beyond the color of somebody's skin or their sex, what was the nature of the contact?"

Kurtenbach said Phoenix officers undergo extensive training on when to pull and point their guns, but there are not many specifics in official operations policy.

"An officer who pulls out his or her weapon is trying to gain compliance," Kurtenbach said. "The use of deadly force would be authorized at that point; one can assume that."

The ABC15 investigators originally asked for police body-worn camera videos of all gun pointing incidents from September; however, a police spokesman said there were so many it would take public records staff an extremely long time to process. The department provided demographic and crime data about all the incidents. Told to narrow the request to ten incidents, ABC15 selected all reported on a single day: September 17. In the two months since the original request, Phoenix police have released 11 of the written reports and corresponding videos for three.

Of the 318 PGP incidents, officers only fired their guns once. They had responded to a domestic violence call, and they said the suspect appeared to have a gun and a knife.

But most cases did not involve a violent crime or a suspect with a weapon. In one incident, a naked man was found sleeping in an empty building, and he ignored police orders. In another case, an officer responding to a fight call saw a black man running and stopped him at gunpoint. The guy complied, but he had nothing to do with the fight. There were about 50 PGP reports that listed no crime at all.

"Supervisors are reviewing every body-worn camera associated with PGP," Kurtenbach said. He said they are watching to ensure the actions are consistent with police policies. The assistant police chief added he's not aware of any PGP incident flagged for a policy violation so far.

"Pulling out a gun, even putting their hand on a weapon, I believe, triggers and continues to escalate a situation," Wood said. "If they want compliance, that's not the way to get it."

Phoenix police already have some de-escalation training. Assistant Chief Kurtenback wants to wait for more PGP data now, but he is open to future improvements.

"If there's lessons to be learned that lead to policy changes, we'll do that," Kurtenbach said.