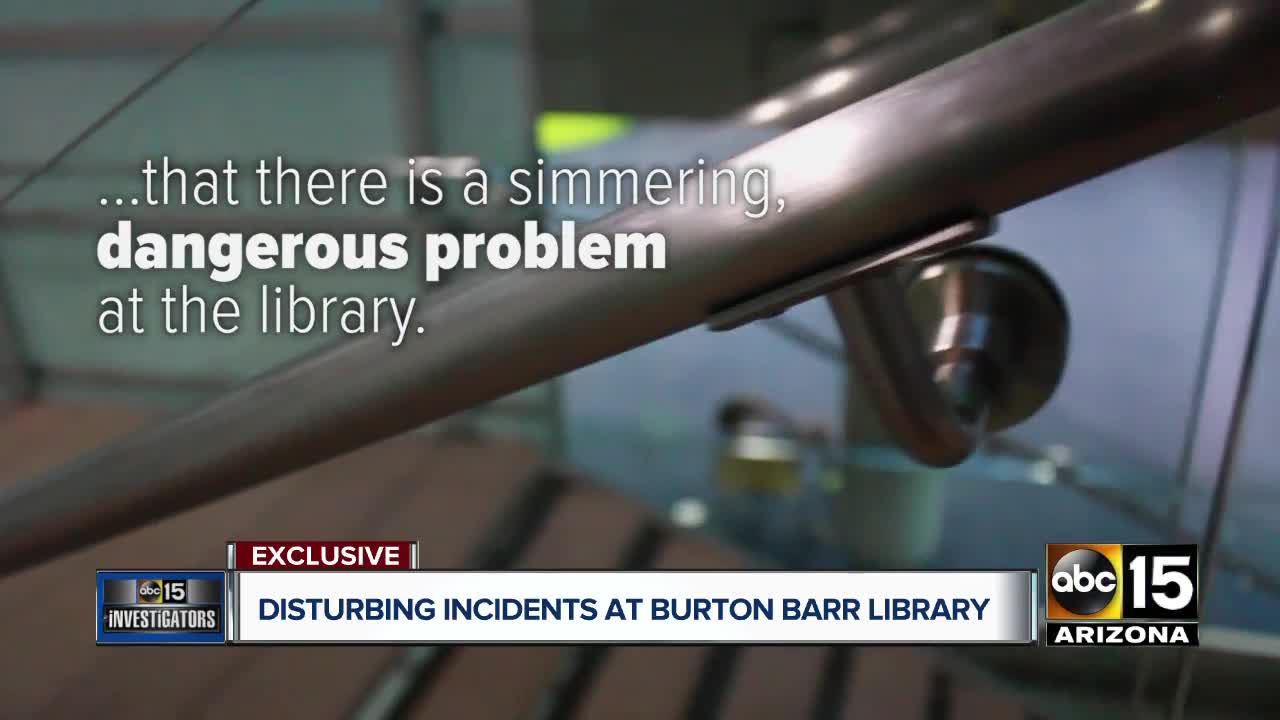 On a Wednesday evening inside a restroom at Phoenix’s Burton Barr Central Library, a man stood in a urinal touching himself while watching another patron use the spot next to him.

But as guards waited for the man to leave the bathroom, they then heard another person shouting, “What the f…!”

Inside, the man was still peeking under stalls and made eye contact with another person, according to an incident report obtained by ABC15.

The library’s response: A one-year suspension.

Current and former employees said it’s just one of many examples of the administration failing to issue adequate suspensions and bans, and allowing problematic visitors to continue to use the library.

“The administration offers no transparency into how they are applying punishment,” according to a source who asked not to be identified due to fears of retaliation.

“(They’re) so far removed from the front lines,” the source said. “They sit on the third floor behind glass doors that are locked. And they simply are unwilling to acknowledge that there is a simmering dangerous problem in the library that staff is subjected to.”

Through a series of public record requests, ABC15 has obtained years of internal incident reports related to problems with visitors at Phoenix’s biggest and busiest library. The “customer behavior forms” document inappropriate, dangerous, and sometimes illegal conduct by patrons.

However, ABC15 has also recently discovered that library officials did not disclose hundreds of the records in response to the station’s requests.

In statements, City Librarian Rita Hamilton and her staff have said safety and security are their highest priority.

They have declined to answer further questions in person.

ABC15 has spoken to multiple former and current employees who said problems at Burton Barr are constant, repetitive and predictable.

“You for sure would see an overdose, someone drunk and passed out, you would get yelled at, harassed,” said David Luna and Sarah Kennard, two former employees who recently left the library because of safety concerns. “It was something we came to expect.”

There have been 3,000 police, medical, and fire department calls for service at the library in the past six years, records show.

There have also been more than 800 customer behavior forms during the same period. [Only 177 were provided to ABC15]

But several insiders have told ABC15 about disturbing incidents that were never reported to outside authorities.

Employees said many unacceptable safety and security risks have been normalized at the library. They describe a culture that has prioritized the concerns of library property over people.

Kennard pointed to an incident involving another female employee who was groped outside the library.

“She had left for the day, and she came back in upset and crying, shaking, saying she was touched right outside the library,” Kennard said. “They pulled the cameras. And sure enough, they saw this guy. I remember seeing on the camera this guy follow her…and touch her on the behind.”

Kennard remembers a suspension for the man that lasted only months.

The report does not appear to be included in any of the customer behavior forms obtained by ABC15. No records of police contact were located by ABC15 in relation to this incident.

“Within the same week, there was an incident that made the news where a customer took a backpack and swung it across the computers,” Kennard said. “He had a permanent ban.”

"Sexual harassment at Burton Barr by patrons was a regular occurrence, with the main discipline (even for repeated offenses) being a warning... I was frequently groped; I was followed through the stacks on the 5th floor, which is poorly lit with very high shelves."

Women at the library said stalking is a serious issue.

“It’s very common for all of the women there to have a stalker,” Kennard said.

In a series of written responses, library officials said they cannot comment on individual instances without reviewing each one.

“The level of corrective action determined is based on the nature of the violation of the conduct and behavior expectations outlined in the applicable policies,” according to a spokesperson.

WHERE ARE THE RECORDS?

The records reveal deeply disturbing behavior inside the library. In some cases, people who commit sex-related and other crimes are only temporarily suspended.

ABC15 also sought to review the records to understand more about how administrators handle, report, and document incidents.

After our initial news reports, insiders told ABC15 they were concerned many forms were not disclosed to the station.

There were actually 821 customer behavior forms during that period.

After a public meeting at the library, a spokesperson Lee Franklin refused to answer questions in person about whether records were intentionally withheld.

Franklin later sent ABC15 an email explaining why more than 600 incidents were not provided to ABC15. She claimed that ABC15 had actually requested a narrower batch of records for only incidents involving police and fire department responses.

“However, the city’s request forms filled out by (an ABC15 producer) and Mr. Biscobing indicate you wanted Customer Behavior Forms involving a response from police or fire,” said spokesperson Lee Franklin. “This matched our conversations on the phone and those documents are what we provided you --- forms that involved a response from police and fire.”

ABC15’s public record requests have never limited the scope of the requested customer behavior forms, which the station is still requesting from the city.