Officers pinned Mesa man, Reginald Trotter, in 2018 as he begged for help 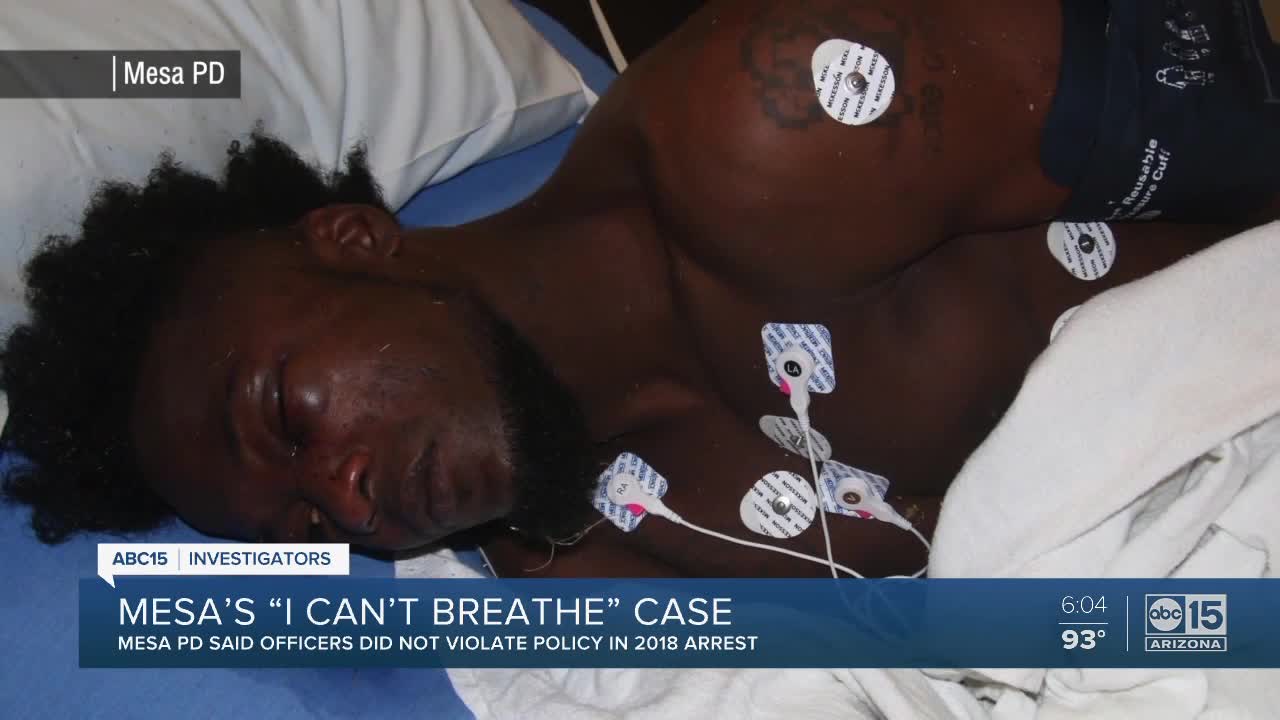 Mesa police said officers did not violate policy in 2018 arrest. MESA, AZ — An excessive force complaint against Mesa police for a 2018 arrest involved a handcuffed man pinned down while complaining, “I can’t breathe.”

In November 2018, Trotter cut through a park after hours -- a misdemeanor crime -- and was confronted by Mesa officers. When Trotter, who had a warrant for his arrest, tried to jump over a fence to get away, a struggle ensued.

The officers punched and used a Taser on Trotter, who is black. He’s seen squirming and, at one point, trying to stand up. Officers later reported Trotter was so strong he seemed to have “superpowers.“

After Trotter was in handcuffs, one officer had a knee on the man’s head as a second officer had his arm across what appears to be the man’s neck. A Mesa police spokesman told ABC15 the arm was actually on Trotter’s jawline and no pressure was applied to his neck.

Several police body cameras captured Trotter repeatedly saying, “I can’t breathe.” One officer replied, “You are on your side; you are breathing good.” Trotter then tells the officers, “I need you to help me.”

Trotter was hospitalized and charged with multiple crimes including aggravated assault on a police officer and cocaine possession. He took a plea deal for lesser charges and is in prison.

Trotter’s father, who is also a pastor, joined protesters in Mesa Tuesday night. He wants the police department to create a citizen review board, better discipline officers who have received multiple complaints, and expand de-escalation training.

“Either it’s a cultural thing or they just don't understand, and they don’t have the tools,” the elder Trotter said. “We believe if they have these tools, they‘ll do a better job.“

A Mesa police assistant chief spoke to ABC15 specifically about Trotter’s case late last year, but he declined to discuss the particular now due to a pending legal claim in this case.

The assistant chief did send ABC15 a lengthy statement:

"Thank you for reaching out to the Mesa PD during this time of community anguish sparked by the tragic and unnecessary death of George Floyd in Minneapolis. We value the relationship with our community and those partnerships which strengthen public safety in the City of Mesa. The incident involving Mr. Trotter was thoroughly investigated in 2019 and the findings of that investigation were provided to you in response to your public records request. I sat down with you for a lengthy interview in December of last year as well.

The Mesa Police Department continues to be progressive and is committed to process improvement.

The Mesa Police Department has worked in partnership with Mesa community leaders over the years to improve our service delivery. We are a learning organization and we acknowledge our missteps when they occur. We have worked with numerous outside organizations seeking insight and recommendations for organizational improvement. This can be evidenced by our work with the Police Executive Research Forum (PERF), Police Assessment Resource Center (Merrick Bob), former Maricopa County Attorney Rick Romley, Department of Justice, Community Relations Service and President Obama’s Task Force on 21stCentury Policing.

As a result of this outreach, the department, along with the community has been working tirelessly over the last 18 months to review all our policies related to discipline and use of force. The Use of Force Review and Implementation Committee met every two weeks for nine months to review every use of force policy. The Committee consist of 12 community members and 12 members of the police department. Every review has gone before the executive staff for review and implementation.

As a result of their work, the following policy directions have been provided:

1. Implementation of concurrent investigations that ensures incidents involving force are reviewed for legal, policy and training issues in a timely manner.

2. The creation of the Critical Incident Review Board consisting of representation from labor association, member from Advance Training, Legal Advisor and two community members.

3. Prohibition of shooting at or from a moving vehicle.

5. Ensure officers have a duty to intervene when they observe unreasonable, unnecessary, or disproportionate use of force.

6. Emphasize that the policy of the Mesa Police Department is to value and preserve human life in all situations.

The examples listed above are just a fraction of the work that has been accomplished by the Use of Force Review and Implementation Committee. The full scope of work can be reviewed here.

On June 25th, in collaboration with the committee meetings, there will also be Community Review Sessions to provide a platform for input and an opportunity for the Committee to receive additional feedback from the community. We encourage all citizens who reside, worship, work, conduct business in Mesa to attend.

We will be an even better police department and a stronger community by working together, with purpose, compassion, empathy, and respect."