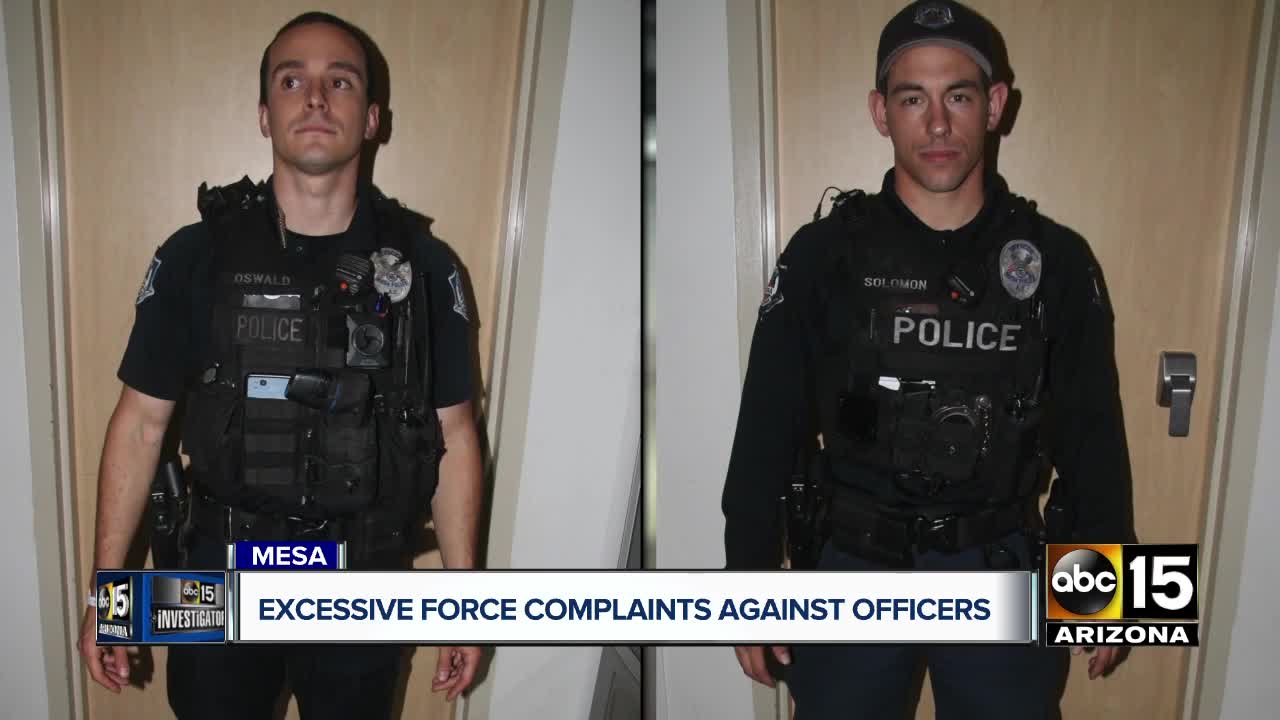 After three allegations of excessive force in just over two years, two Mesa police officers have been exonerated by their department and have faced no discipline. 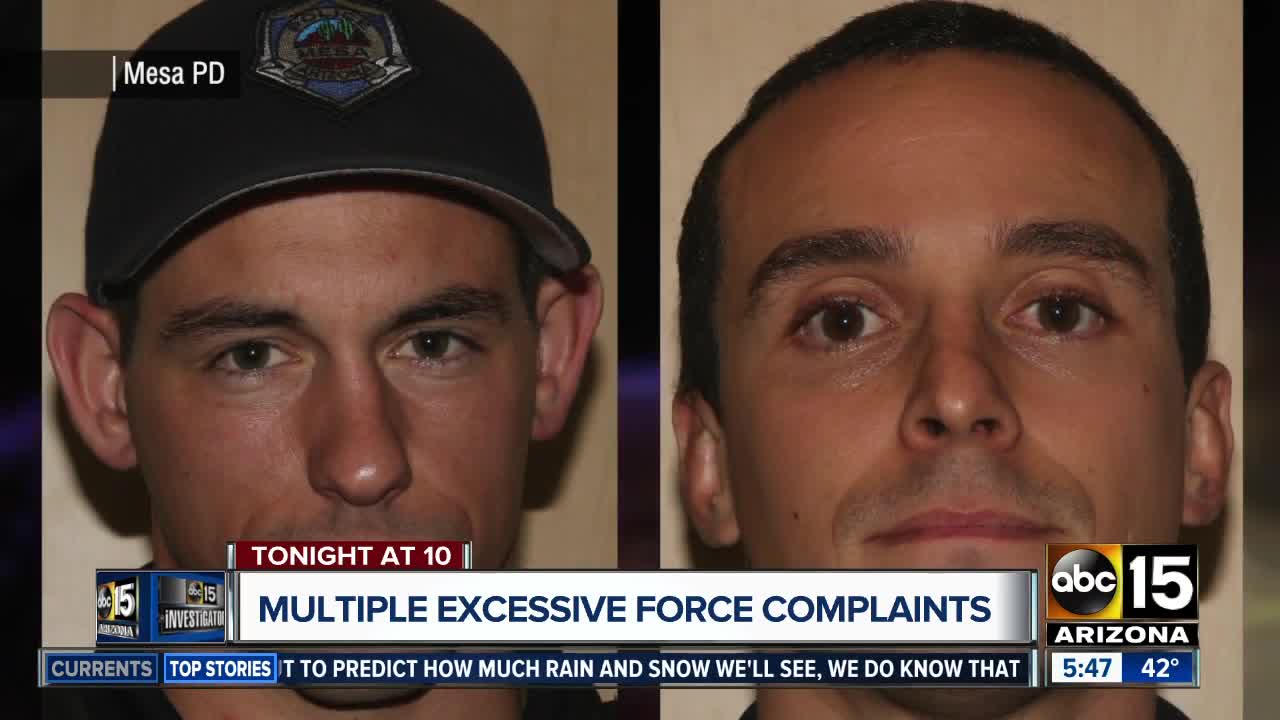 MESA, AZ — After three allegations of excessive force in just over two years, two Mesa police officers have been exonerated by their department and have faced no discipline.

The ABC15 Investigators obtained videos, police reports, and internal investigations about all three incidents which occurred between 2016 and 2018. The officers involved were Brigg Solomon and Nicholas Oswald. Both officers have five years on the force, and they continue to work together on the bike squad.

The most recent complaint involved the arrest of Reginald Trotter in November 2018. The officers stopped Trotter for allegedly walking through a closed city park, a misdemeanor. On the video, you see Officer Oswald approached Trotter, who turned and tried to jump over a fence. Both officers jumped on top of Trotter, and several additional officers came to assist. They tasered Trotter and punched him in the face.

Trotter was charged with aggravated assault on an officer and possession of marijuana and cocaine. His case is still pending.

"If you look on the body-cam videos, it shows that I'm innocent that I never touched none of them (sic) officers, and they are the ones who assaulted me," Trotter testified in Maricopa Superior Court last month. The judge responded that the poor quality of the video made it difficult to see exactly what happened.

In the chaotic video, you can see Trotter try to stand up once, but you can't see definitively whether he struck the officers. Later, one officer said Trotter elbowed him, breaking his body cam. Another officer broke his finger, and others had minor injuries. Trotter's face was cut, bruised, and swollen. He was hospitalized.

"It's ridiculous if you ask me," said Trotter's current defense attorney, Edwin Molina. "One count is based on the officer punching him in the face and spraining his wrist."

The police report said Trotter "looked like a man possessed as he shrugged both of them [the officers] off as if they were little children." Another officer later told internal investigators that Trotter seemed to have "superpowers."

"I thought the officers embellished in that report, and it was inconsistent with what he [Trotter] was telling me," said Kyle Reedy, the first defense attorney to represent Trotter in this case.

"Their injuries were inflicted by themselves abusing Reginald," Molina concluded.

Officers Oswald and Solomon were also accused of excessive force by Joshua Dombrowski in 2016 and Jason Barton in 2017.

"Each one is concerning to us," said Mesa Assistant Police Chief Ed Wessing. "We review and investigate each one of these."

Mesa police responded to the ABC15 Investigators' public records request on all three cases and agreed to answer questions on camera.

"Both of these officers are working in one of the highest crime areas in the city on the nights when we predominately have the highest calls for service," Wessing said. "They are in an area that's known for drug activity, gang activity, and criminal activity, and so the people that they're contacting are more likely to probably not comply with our instructions."

Wessing added the officers had about 300 arrests combined in the same period they received three complaints.

In the 2017 case, Jason Barton turned to run when the officers approached. They kneed Barton and pulled his hair. The officers said they had a legitimate reason to stop Barton for jaywalking because they were doing extra education and enforcement after an increase in car-pedestrian crashes in the area. Oswald and Solomon said Barton had marijuana in his possession, and he was trying to destroy or conceal it during the arrest.

In the 2016 case, Officer Solomon told investigators he wanted to Joshua Dombrowski to "yield to pedestrians on the sidewalk" while riding his bike. Still, the cyclist failed to respond to his commands to stop. Solomon tackled Dombrowski over the top of his bike.

Dombrowski later told ABC15, "I didn't know he [Officer Solomon] was yelling at me."

Dombrowski said he became tangled in the strings on his backpack during his arrest and couldn't put his hands behind his back to be handcuffed. The officers tasered him. Afterward, Solomon pointed and yelled in Dombrowski's face. The officer later told investigators, "I just wanted to be clear."

"In each one of these cases, they started with a very low level at force: control holds, verbal," Wessing said. "When that's not effective, they went to the next level, including a taser. When that was ineffective as they continue to struggle, and in all of these cases, then they got strikes."

In all three cases, internal investigators and police officials concluded Officers Owswald and Solomon acted within the department's use of force policy. They were exonerated on the unnecessary force allegations, and they continue to pair up on the Mesa police bike squad.

Mesa police have a computerized early warning system to detect a concerning number of uses of force, accidents, complaints, or other behaviors. Chief Wessing said neither Solomon nor Oswald have been red-flagged.

"They have no other disciplinary history in their entire five years they've been here, other than one of them, I believe, missed court," Wessing said.

All three suspects had prior arrests, mostly for drugs, but none of the prior arrests were for violent crimes.

Barton and Dombrowski pleaded guilty to resisting arrest after their altercations with the Mesa officers.

Trotter, who also had an active warrant for driving on a suspended license, originally pleaded guilty to some charges, but he now wants to rescind the plea. He is awaiting the judge's decision. He also has filed a legal claim against Mesa police.

"I've always felt that I was innocent," Trotter said in court.

ABC15 Investigator Melissa Blasius covers policing and public safety. Got a news tip? Email her at Melissa.Blasius@abc15.com or message her on Twitter and Facebook.