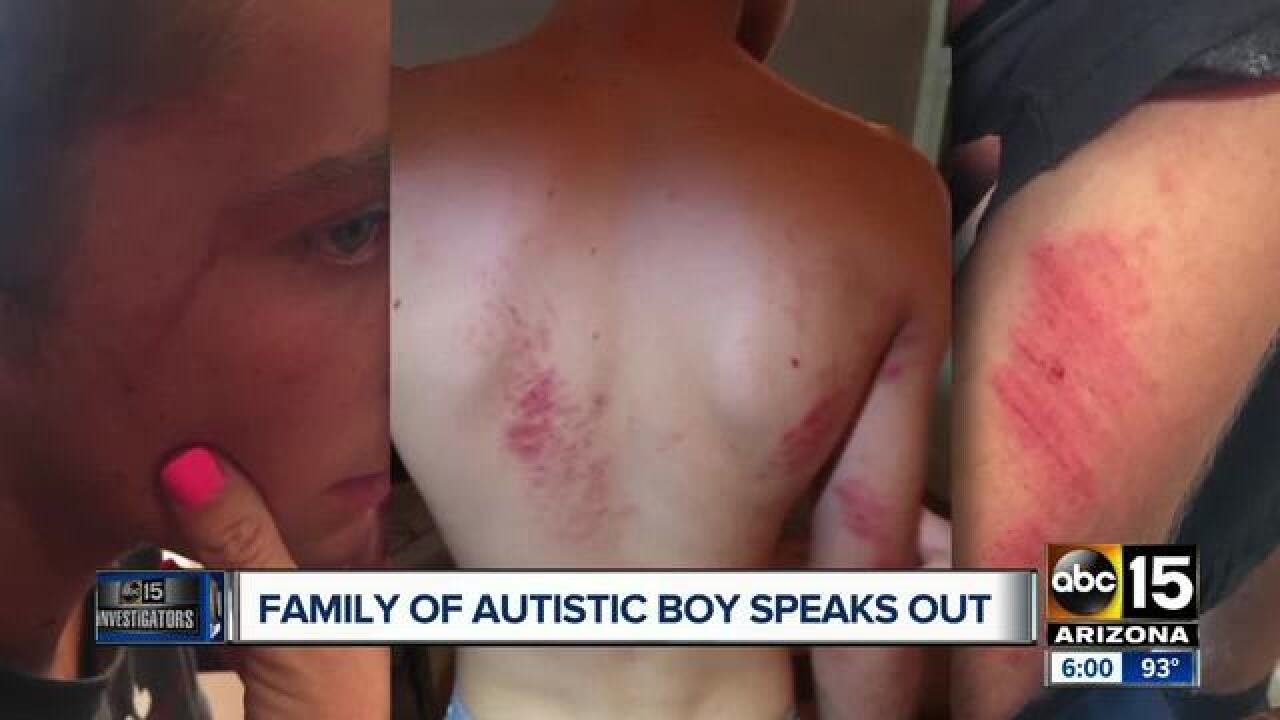 The mother of a 14-year-old boy with autism, who was traumatized after a run-in with a Buckeye officer, says she never expected that what happened to her son would spark a national discussion.

Diane Leibel also said see police body camera video was also one of the hardest things she’s ever had to do.

“It was excruciating honestly,” she said. “I’ve never heard my son scream like that before. I don’t understand how it even got there."

On July 19, a Buckeye Officer named David Grossman mistook Connor Leibel for a drug user. As he drove by a quiet neighborhood park, Grossman claimed he saw Connor putting his hand up to his face, giving him reasonable suspicion to handcuff and detain the boy.

The officer lost control of the situation.

It turned out Connor was using a small string to “stim” – a coping mechanism common for people with autism.

ABC15 broke the story about the video on Monday afternoon.

Since, reports about the incident have appeared on every local Phoenix station, some national shows, and it’s even been picked up by the New York Times. The reason: It’s sparking a debate about how officers deal and confront individuals with mental illness, other disabilities, and autism.

“We were afraid that our child would be ridiculed or that something would happen somewhere along the line,” Danielle Leibel said. "I didn’t think it would be from a police officer.”

The day after the incident, Leibel filed a citizen’s complaint with the police department against Grossman, a “drug-recognition expert.”

Weeks later, officials up and down Grossman’s chain of command cleared him of using unreasonable force and that he had reasonable suspicion to detain the boy.

After the final decision, no one from Buckeye police notified Leibel, she said.

“I’m every emotion I can think of. That’s my baby who was manhandled like that,” Leibel said. “I do see that would be reasonable to approach him if he saw him putting something to his face….But after he showed him what he had, that should have diffused the situation. It should end there.”

Parents of other children with autism have told ABC15 they are horrified by what happened and how the incident was handled by the officer.

However, some people are also blaming Leibel’s parents and his caregiver for leaving him alone.

His mother’s response: “He’s a 14-year-old. He’s higher functioning. He’s not a danger to himself or others…He plays in that park every week, and we’ve never had an issue.

“I’ve never, in his 14 years, had an issue or have anybody suspect he was on drugs,” Leibel said.

After the incident, Buckeye Police announced they are working on creating a voluntary register for people with disabilities, mental illness, and autism. They also proposed that those individuals wear bracelets.

The registry would allow officer to look up specific information on people the come into contact with.

Leibel and other parents of children with autism told ABC15 they were disgusted by the idea.

“I think it’s disgusting that you have to label someone with a disability with a special mark so they don’t have to live in fear of being hurt by police,” she said. “How would that have changed (the situation with my son) at all.”

A parent of another child with autism who lives in Buckeye told ABC15 the idea reminded him of the "Holocaust."

“On wed. 7-19-17 between 4-5pm, a 14 year old autistic boy was tackled to the ground by a Buckeye police officer at a playground in Verrado. The officer was repeatedly told that the boy was autistic but refused to let him up until backup arrived, the boy had nothing to indicate he was a threat. Please investigate this story, this is appalling, and must be known ....terrible, please investigate.”

ABC15 reporter Megan Thompson reached out to Buckeye Police official to ask questions about the tip. She spoke to a spokesperson later in the day and took contemporaneous notes of the conversation.

In those notes, Thompson wrote that the police official told her that the subject “declined” to show what was in his hand. The notes also show that police claimed the item was “concealed” and that it wasn’t able to be identified.

The body camera video and reports written the day of incident contradict those facts.

When asked about what ABC15 was told, Leibel said, “It’s a lie. Maybe they just don’t want media coverage.”

ABC15 reached out to Buckeye Police about the discrepancies. In an email sent Thursday afternoon, a Buckeye Police spokesman told ABC15 that they “would look into it” and to “have a good weekend.”

Since filing the complaint, Danielle Leibel said no one from Buckeye Police have reached out to their family.

But the Leibels, through their attorney, have sent Buckeye a letter making three requests: (1) A face-to-face apology; (2) Community service for the officer in the autism community; (3) Training for every Buckeye officer so this doesn’t happen again.

Buckeye Police have not indicated if and when they plan to respond to the family’s letter.