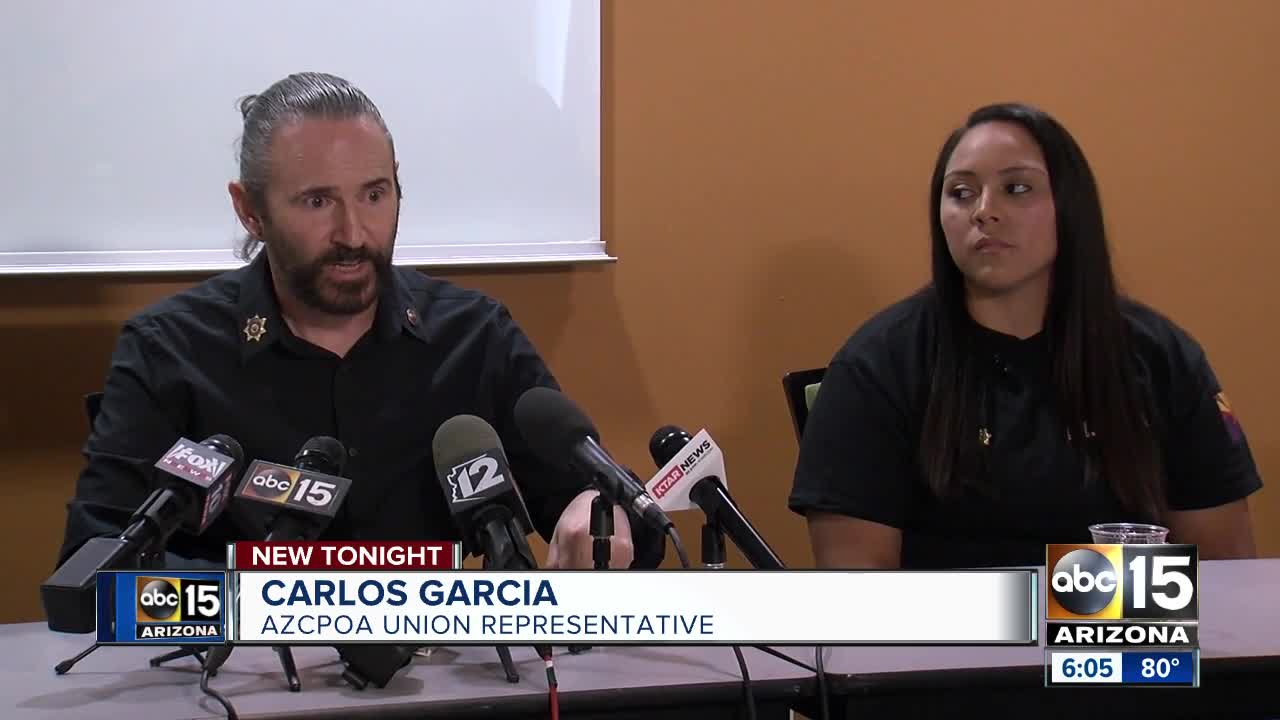 Gabriella Contreras, who leaked the videos showing prisoners running rampant through the jail to ABC15, said the top leadership at the department of corrections needs to be replaced.

PHOENIX — Union representatives, an inmate advocacy group, and a prison whistleblower came together in a joint press conference Tuesday to demand more transparency from the Arizona Department of Corrections and the Governor about how they’re handling broken cell doors inside the prison system.

It was also the first public comments from Sgt. Gabriella Contreras after her exclusive interview with ABC15 last week about why she decided to leak prison videos that exposed the chaos inside the state’s Lewis Prison.

Contreras told a room of reporters that she believes Arizona’s Department of Corrections needs an overhaul of its top administrators.

“I think they need to get rid of everybody from the top down,” she said. “They need a whole new administration.”

On May 15th, Contreras filed an official whistleblower disclosure with the Governor’s Office.

In addition to claiming retaliation for downloading prison videos, Contreras also said that managers at Lewis Prison instructed ADC employees to alter reports to “under-report the scope of the broken door problem” after ABC15's original story was released.

During the press conference, Contreras said the governor’s office has contacted her about the whistleblower disclosure and promised to investigate the claims.

“[The Arizona Department of Corrections] owes her an apology,” said Carlos Garcia, a retired lieutenant and union representative for the Arizona Correctional Peace Officers Association.

Since ABC15 broke the story about the broken cell locks, Garcia has been a vocal critic of the corrections department. He said the problems stem from years of neglect in properly maintaining the doors and locks.

“These were top of the line locks,” he said. “If we maintained them like we were supposed to, we wouldn’t be in this dilemma.”

She said he emailed her in recent weeks and said the prison do have door maintenence teams, including some staffed by inmates.

“I’m not comforted by [inmates] fixing their own locks,” Hamm said.

One of the major focuses of the press conference was a call from Garcia and Hamm to the Governor Doug Ducey's office to provide more information about the outside investigation he announced several weeks ago.

In a statement Tuesday, a spokesperson for the governor said the investigation by two retired state Supreme Court justices "will review security issues occurring at Lewis Prison and other state prisons to include reviewing events contributing to these issues, actions taken by Corrections, incidents of assaults on inmates or staff and more. Their investigation also will put forward recommendations to prevent a situation like this from ever happening again."

The governor's office says the investigation has begun but said it was not possible to provide a timeline for when the work would be complete.