How police can use Brady lists to discredit whistleblowers 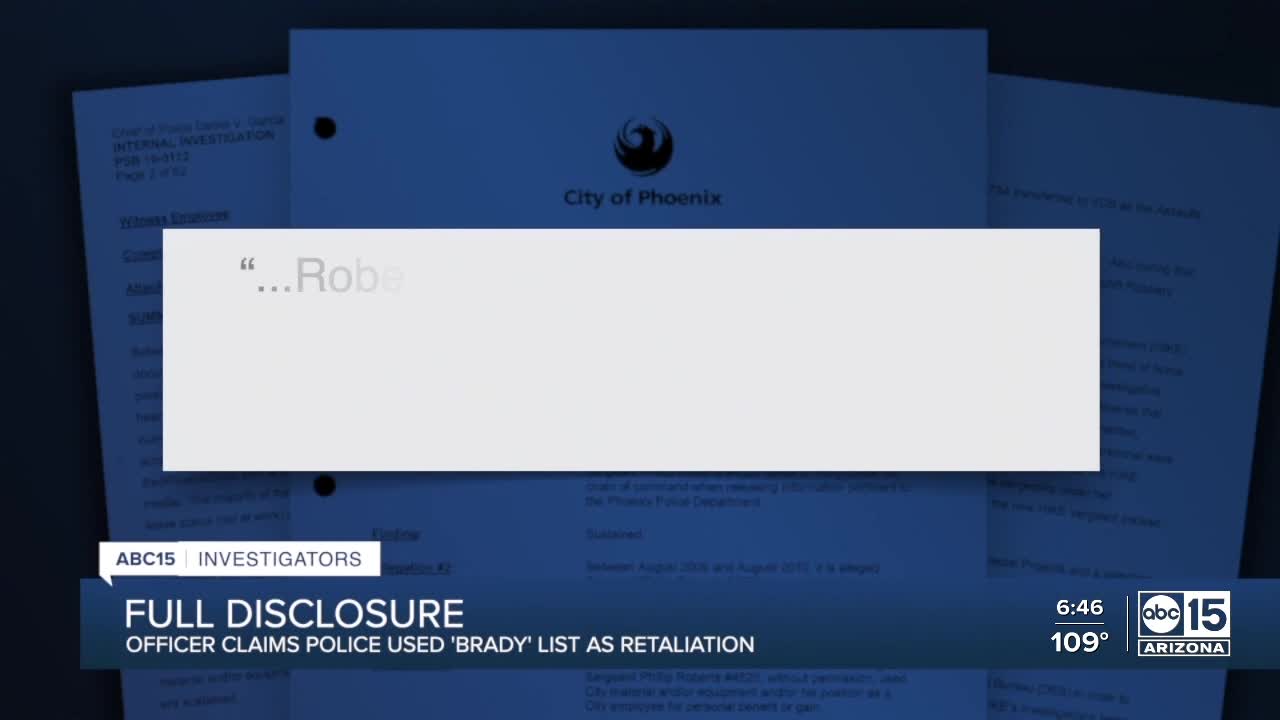 An ABC15 investigation found the broken and disparate Brady system used by prosecutors is based almost entirely on self-reporting and self-investigation by police departments. 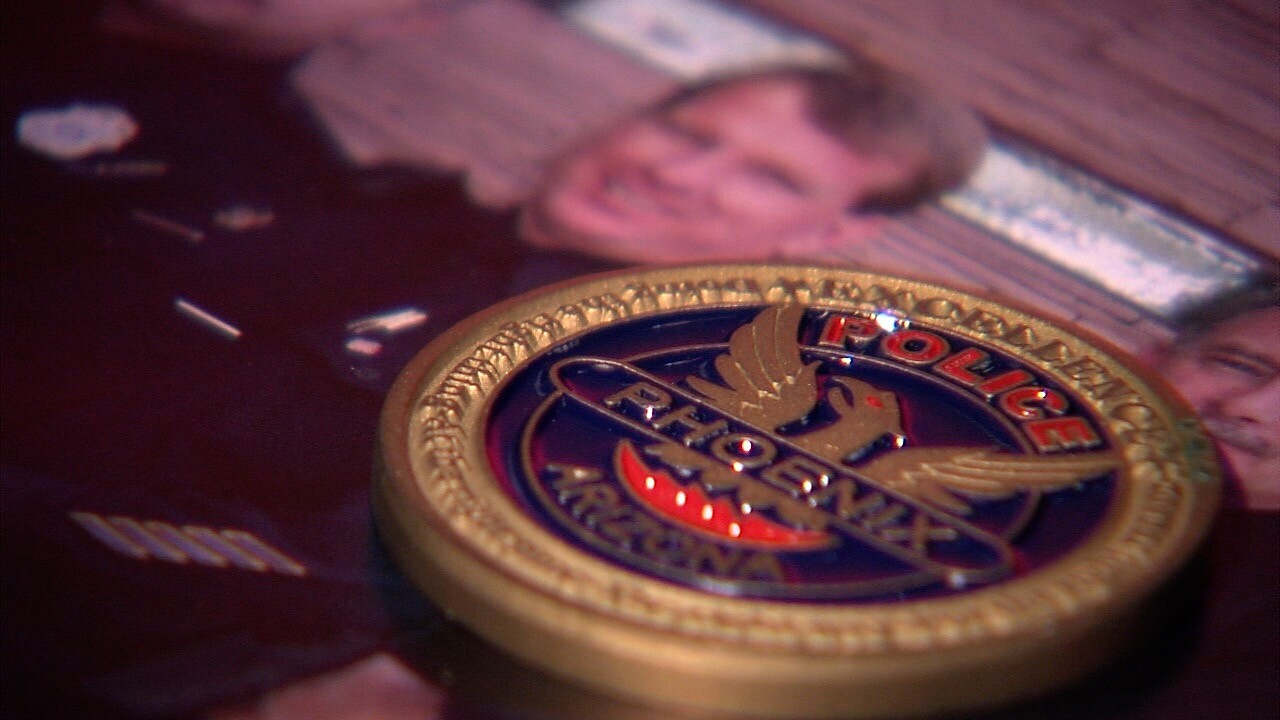 Phil Roberts has a stain on his 33-year law enforcement career.

Yet the retired Phoenix sergeant — and whistleblower targeted for completely upending the city— doesn’t want to attack the importance of the lists, which contain 1,400 dishonest and disreputable law enforcement officials tracked by county attorneys' offices.

He just believes the entire Brady system and its lack of oversight need a major overhaul.

“I’ll be the first to tell you that most people on the Brady list deserve to be there,” Roberts said. “There are police officers that are working right now on the streets of Phoenix and through the Valley and should not have a badge.”

But he continued, “My reason why I’m on the Brady list is because there are a percentage of officers who are on there for retaliatory reasons.”

An ABC15 investigation found the broken and disparate Brady system used by prosecutors is based almost entirely on self-reporting and self-investigation by police departments. With such little oversight, it means police agencies can also use internal investigations and the lists to discredit whistleblowers.

“There are virtually no checks and balances,” Roberts said.

In a written response for this report, Phoenix police did not address Robert’s case specifically but said that retaliation is unacceptable.

For years, Phoenix said the city was under siege from cartel-style ransom kidnappings.

Top city officials, including the police chief and the mayor, testified before Congress that every day someone was being swept up and held for money or else they would be maimed or killed.

In 2008, Phoenix police claimed 358 such kidnappings. The crime wave made national news and fueled anti-immigration hysteria and hate.

The problem: the statistics were grossly inflated to obtain millions in federal grant funds.

“I knew that was wrong because I was one of the sergeants investigating these,” he said. “We weren’t having kidnappings every day. That wasn’t going on.”

Roberts, who worked inside Phoenix’s home invasion and kidnapping unit, wrote dozens of memorandums about wrongdoing within the team and department, especially about the kidnapping statistics.

City officials lied about the number of kidnappings, lied about auditing the statistics when questions were raised, and then spun the truth when confronted with facts.

The 358 kidnapping reports cited by Phoenix were a hodgepodge collection of incident numbers tossed on a page in response to questions about the statistic’s validity.

So when Roberts blew the whistle, and ABC15 did a story, things got loud.

The city and its police chief, who would eventually lose his job over the scandal, were exposed and embarrassed.

“Yes, absolutely,” Roberts said, when asked if he was put under internal investigation for whisteblowing. “They were ordered to launch an investigation and that came from the highest level of the city.”

There was a clear directive: “Investigate Phil Roberts.”

“And how do you think they wanted that investigation to turn out?” Roberts said during an interview.

When asked if it was meant to discredit him, Roberts answered, “Absolutely.”

In the final internal investigation, the city sustained three allegations against Roberts and fired him.

Basically, in that final allegation, he was sustained for using the City of Phoenix bird symbol at the top of his memos and calling into the records department to get information from incident reports to support his claims.

“Because I wrote memorandums with the bird on it, I was using city resources for personal gain,” Roberts said. “Ludicrous.”

Roberts sued, and it took three years before the city finally settled and gave him his job back. During that time, Roberts said he had a heart attack from the stress.

ABC15 received the following statement after contacting the Phoenix Police Department to respond to Roberts' claims.

“Retaliation is unacceptable behavior and will not be tolerated,” according to the statement. “Investigations where retaliation is alleged are serious and against Arizona law, these cases are looked into thoroughly. All individuals have the right to work in a professional atmosphere that promotes equal employment opportunities and prohibits discriminatory practices, including harassment and retaliation.”

Over the past several years, a coalition of police unions have tried to get lawmakers to add uniformity to the Brady list system and add an appeal process.

“The Brady list has been weaponized. It has been turned into something that it is not,” said Sean Mattson, a union leader during a legislative hearing.

He also said the lack of uniformity and standards has caused some counties to just “wing it.”

While some of the unions' concerns are legitimate, defense attorneys worried about other provisions in their initial bill, including an attempt to make Brady lists exempt from public records.

Also, the appeals process could drag out and delay important information from reaching a defendant.

“It’s unconstitutional,” Armanda Nava, a defense attorney, testified before lawmakers. “It would jeopardize the entire trial process as we know it… If we delay that, then we risk people getting convicted of crimes that they did not actually commit. And we also risk having convictions overturned when this information is disclosed.”

“When I retired, I was given an honorable retirement,” Roberts said, while showing ABC15 his retirement card.

When Roberts got his job back in 2013, he oversaw a patrol unit in the central part of Phoenix, which includes the Burton Barr Library.

“I’m absolutely proud of my career. All anyone has to do is look at my service record.”