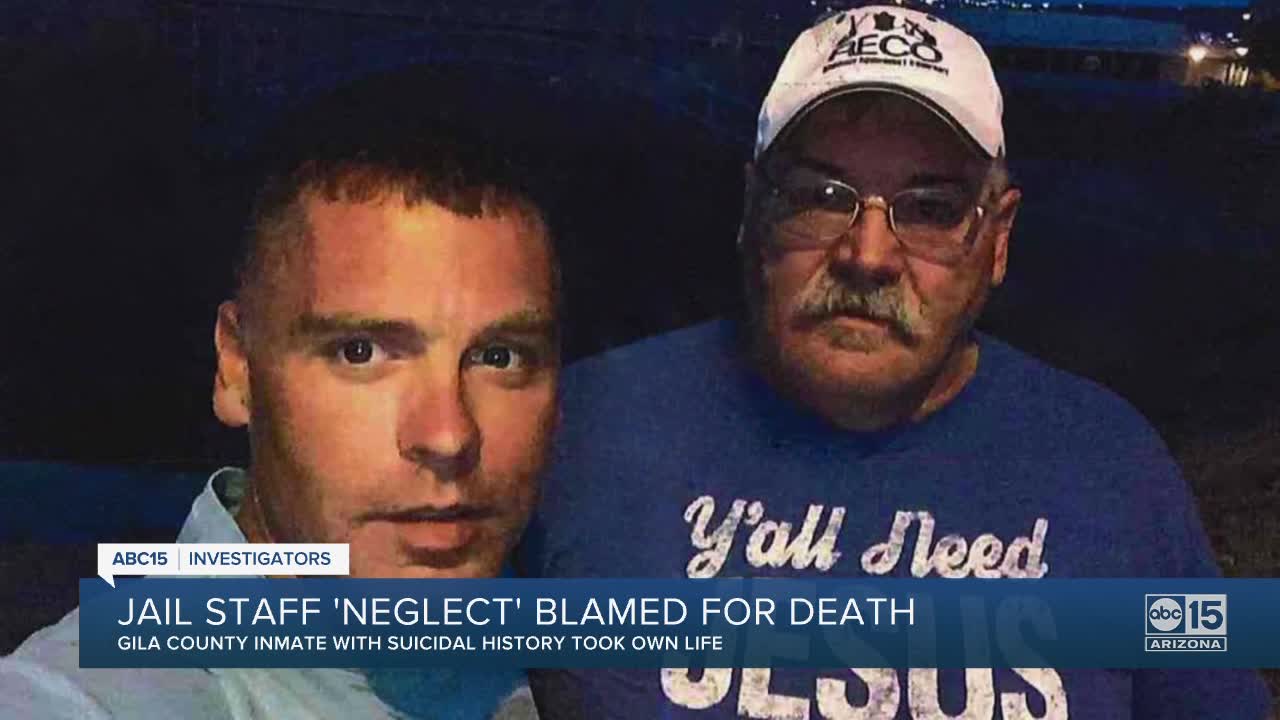 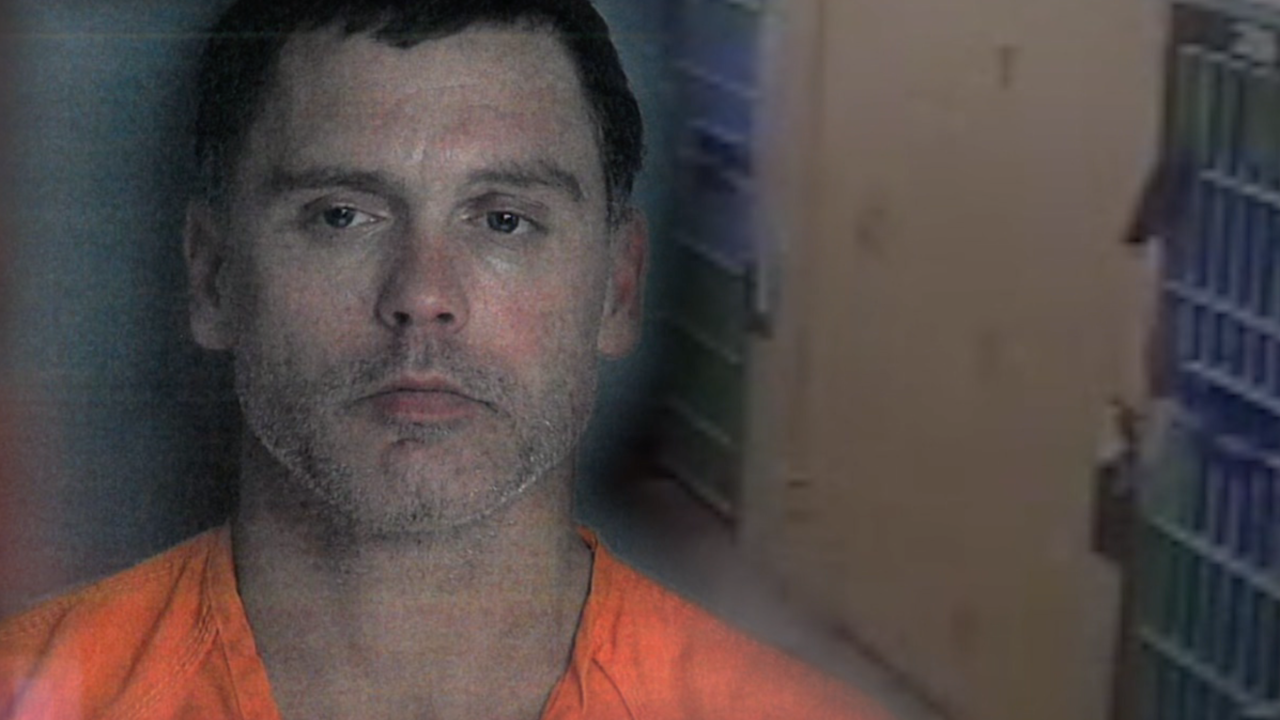 A 40-year-old inmate, with a history of suicide attempts, hanged himself in a Gila County jail cell when detention officers failed to properly supervise him, according to an internal investigation.

The family of Gene "Chad" Beason can only cling to memories of better times, like a 2018 trip to Tombstone. It was the last Chad's sister, Kimberly Pope, saw him alive.

"We had fun, we rode the motorcycles, we just had a good time," Pope said tearfully.

Beason struggled with mental illness and drugs. He was in and out of jail. In December 2018, he was booked on an assault charge in the Gila County Jail. The jail, located in Globe, is about 90 miles east of Phoenix.

On Christmas Day, Beason was found dead inside his cell.

Before Beason was discovered, detention officers walked by his cell four times in 90 minutes, according to video obtained from the Gila County Sheriff's Office. The officers were on security walks and doing official headcounts, but not one looked, or even verbally checked, on Beason.

"That's why they are in jail - to be watched," Chad's father, Gordon Beason, said.

In the video, a blanket can be seen covering Beason’s cell door, blocking the view inside. According to GCSO reports, Beason made a rope from strips of fabric, and he hanged himself from the bunk bed.

"We have the protocols. We have the training. We have everything else, and we're still dealing with human beings," Gila County Sheriff Adam Shepherd said.

Gila County detention officers have violated policies on other occasions, and some violations could have resulted in civil rights abuses.

Last week, ABC15 reported a woman with mental illness resorted to drinking out of her toilet after detention officers cut off water to her cell for two days. One detention sergeant was demoted for failing to create a "dry cell" log. A Globe judge also demanded changes after jail staff repeatedly ignored court orders, including holding inmates behind bars longer than their release dates.

Beason's family filed a notice of claim, a precursor to a lawsuit, against the sheriff and Gila County. The claim stated Chad Beason's death was preventable, and the Gila County Jail failed to provide "standard of care" both in medical treatment and detention. The family is asking for $2 million for Beason's kids.

In recorded internal affairs interviews, the detention officers and their supervisors explained how they violated jail policies.

"I feel really bad, and to this day, I think part of it is my fault," Detention Officer Marylyn Lee said.

"There were breakdowns in the security walk," Investigator Chris McGroarty said. "Would you agree or disagree?"

According to jail policy, detention officers are required to check on inmates at least every 30 minutes, and they must see inmates in the flesh. Blankets are not supposed to cover doors.

"I remember seeing the blanket up," Officer Joseph Casteneda said. "I remember thinking, 'I am going to tell this guy to knock it down,' and I don't know why I didn't."

"I like to give them privacy," Detention Officer Marylyn Lee said. "I smelled the odor of poop, and I thought he was using the restroom."

None of the detention officers involved communicated with each other about the blanket on the door. Goad told ABC15 he would have been more likely to check on Beason if he had known about the inmate's mental health issues.

Other detention officers and supervisors who worked with Beason were aware of the red flags.

"He said he was hearing voices of his family," said Detention Officer Andrew Bradford. He has interacted with Beason on December 23, two days prior to his suicide. The sergeant who booked Beason that day had noted past self-harm or suicide attempts. She indicated in a report Beason had "cut himself" while "in this jail before."

A mental health crisis worker from Community Bridges also evaluated Beason in jail. The report said he was "hearing voices" and he was "paranoid" and "anxious." The mental health worker concluded Beason was "low risk" to himself, so jail supervisors chose not to put him on suicide watch.

"If we all started caring a little more, I think we go a long ways," Detention Officer Andrew Bradford said.

In interviews with inmates in a common area near Beason's cell, investigators learned Beason had been coughing in his cell for 15 to 20 minutes. One inmate eventually pulled back the blanket and found Beason hanging. Jail employees responded, but their life-saving efforts didn't work.

"Everybody makes mistakes. It was just one of those days," Goad said.

Gordon Beason thinks it is more than that. "They neglected their job period," Beason said.

Sheriff Shepherd declined to answer most questions about Chad Beason's death, citing the pending litigation. However, his staff did release the internal investigation, including pictures and video from the jail.

"Every case that we have that doesn't go as well as it should have is a light bulb to us." Sheriff Shepherd said.

Detention officer Lance Goad resigned during the internal investigation. Four others were suspended without pay.

Sheriff's officials say the “no blanket on door” policy is now strictly enforced, and they have increased mental health services in the Globe Jail. They say all inmates get an initial mental health screening at booking. Also, a Community Bridges worker is at the jail four days a week, and a mental health nurse practitioner is made available to inmates who need a higher level of care.

Beason's family said the officer discipline and policy changes are too little, too late.

"His [Chad's] kids will never get to have him to be at their wedding, at the high school graduation, go off to college, and whatever they want to do in their lives," Pope said.