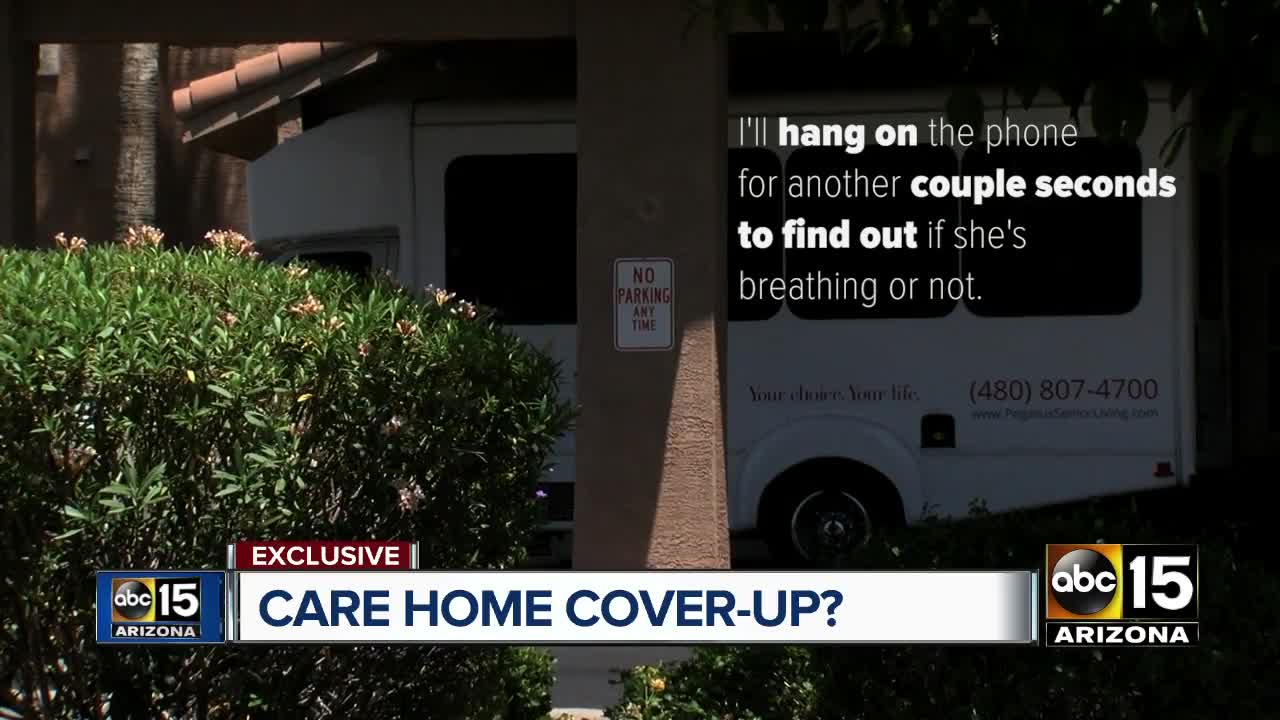 An 82-year-old resident fell at the Broadway Mesa Village apartments in May and later died. Staff did not start CPR. 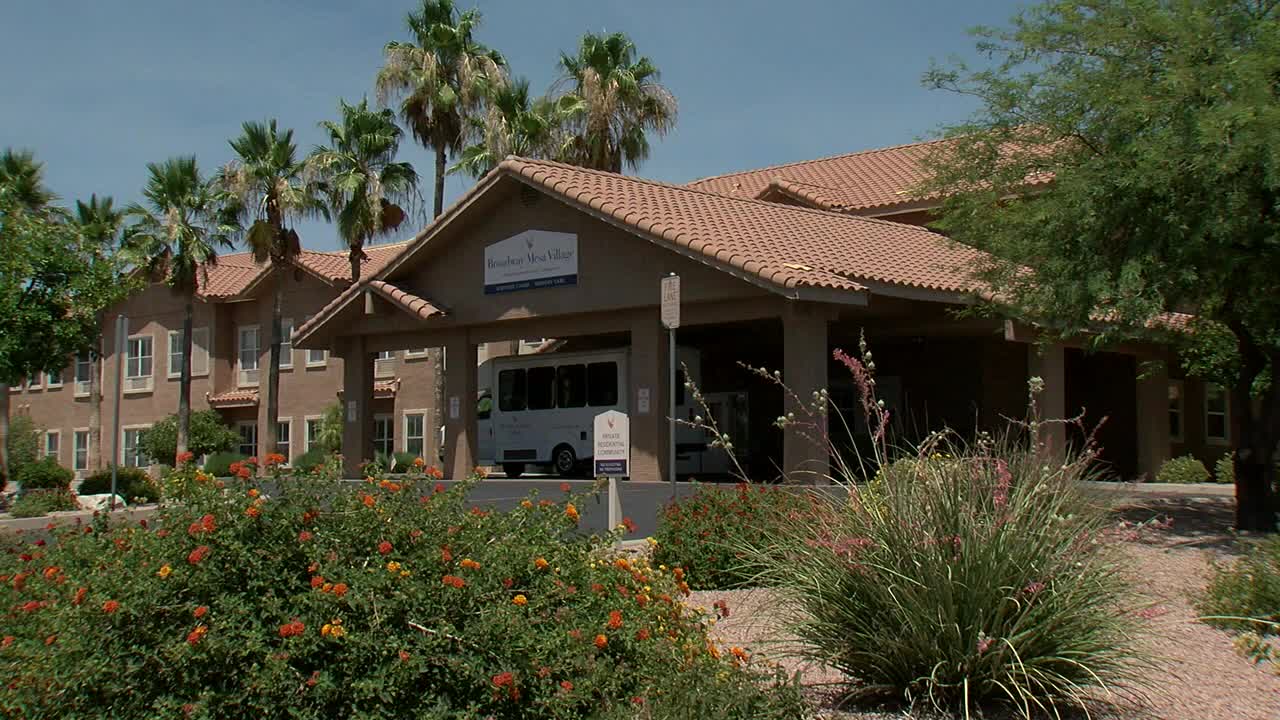 No one knows how long Wendy Rhymes was laying on the floor.

Just before 8 p.m. on March 15, the now-deceased 83-year-old was found in the dining room of Broadway Mesa Village, an assisted living home, with a massive gash on the top of her head and nearly or completely pulseless.

There are no cameras at the east Mesa care facility, located at 7231 E. Broadway Rd. So, it’s also unknown how and why Rhymes ended up face down in a dark, empty room.

Broadway Mesa Village staff panicked once they found her and didn’t perform CPR or other life-saving measures, according to staff interviews, investigative records, and a 911 audio recording obtained by the ABC15 Investigators.

And a former nurse claims he was asked to lie by Broadway Mesa Village interim director Barbara Stein about the care that staff provided to Rhymes before first responders arrived.

“I think they were trying to cover it up,” said the former nurse, who spoke to us on the condition of anonymity. “(Stein) wanted me to say that all of the employees did CPR and everything they were supposed to do, when they just stood back and they did nothing.”

Attorneys and a top executive for the company that owns Broadway Mesa Village are strongly denying the allegations and told ABC15 that the former employee is lying.

THE 911 CALL AND RESPONSE

Listen to the full 911 call in the video player above.

Throughout the call, the dispatcher struggled to get clear answers from Broadway Mesa Village staff about the condition of Wendy Rhymes, whether she was breathing, and if any staff members were performing CPR.

No one did perform CPR, records show.

When firefighters arrived, Rhymes was found still face down in the prone position. “The staff was in disarray and bewilderment,” according to an official statement by a Mesa Fire Department captain.

Firefighters were able to regain a pulse and took Rhymes to a nearby hospital, where she died later that night. On her head, there was a large gash that required 20 staples to close, according to a picture of the wound.

What caused the wound is a mystery.

Mesa police were not called out to the scene the night it happened, and it was later cleaned up by facility staff. Officers were not informed of the death until the family asked them to investigate four days later.

Family members told ABC15 that Broadway Mesa Village said Rhymes fell and hit her head on a nearby piano.

But the Mesa fire captain told investigators that when his crew got to the scene, there was “no obvious indication the patient may have struck her head on the piano, and there was no evidence of a blood trail near the patient to indicate movement.”

A scan at the hospital would reveal that Rhymes had two broken bones in her neck, records show. But there were no fractures on her skull.

There won’t be any additional answers from an autopsy. The Office of the Medical Examiner declined jurisdiction and has ruled the death as accidental, according to police.

The day after Rhymes’s death, the former nurse said Stein asked him to write a statement claiming that staff acted appropriately, performed CPR, and did what was necessary before firefighters came to the scene.

After he refused and because of other patient care issues he had raised, the nurse claims he was terminated within two weeks by Broadway Mesa Village and its parent company Pegasus Senior Living.

The former nurse has also provided more information regarding his claims of retaliation. ABC15 is still working to verify those other claims.

“(They) were being persistent in trying to find something to get me terminated,” the former nurse said.

In response, Pegasus Chief Operating Officer Matthew Thornton denied the allegations and said the former employee was not telling the truth. Attorneys for the company later sent ABC15 a letter further denying the allegations.

Before the attorneys’ letter, Rhymes’s medical records were not cited by Stein and other staff as the reason why CPR was never performed in their official statements to the Arizona Department of Health Services and when asked repeatedly by Mesa police.

Here are several examples from the Mesa police investigation:
- “Barb said because of the situation and the way Wendy looked, they did not want to touch or initiate CPR, saying Wendy’s head looked ‘funny.’”
- “Barb claimed staff was instructed not to move Wendy by the 9-1-1 operator and that was why they did not perform CPR.”
- “In a review of the (Arizona Department of Health Services Reportable Event Report) provided by Barb Stein, I noted it stated staff was told not to move Wendy Rhymes, which was not consistent with the 9-1-1 tape.”

The discrepancies led the Mesa police detective to call the Arizona Department of Health Services in April and report “care concerns regarding Broadway Mesa Village as well as possible fabrication or mis-representation of facts by the Interim Executive Director Barb Stein.”

Stein did not respond to two emails seeking comment. Instead she forwarded those emails to top executives.

In the letter sent by Broadway Mesa Village’s attorneys, it also states, “Moreover, it is public record that the Medical Examiner has deemed Ms. Rhymes’ death accidental and the Department of Health Services closed their investigation concluding unsubstantiated allegations. No citations were issued.”

After ABC15 reached out to state officials for comment on this story, the station learned the health department, which initially closed its investigation earlier this spring, is now re-examining the case and potentially looking at other residents’ deaths this year.

The former nurse also said he was interviewed Thursday by a state health department surveyor.