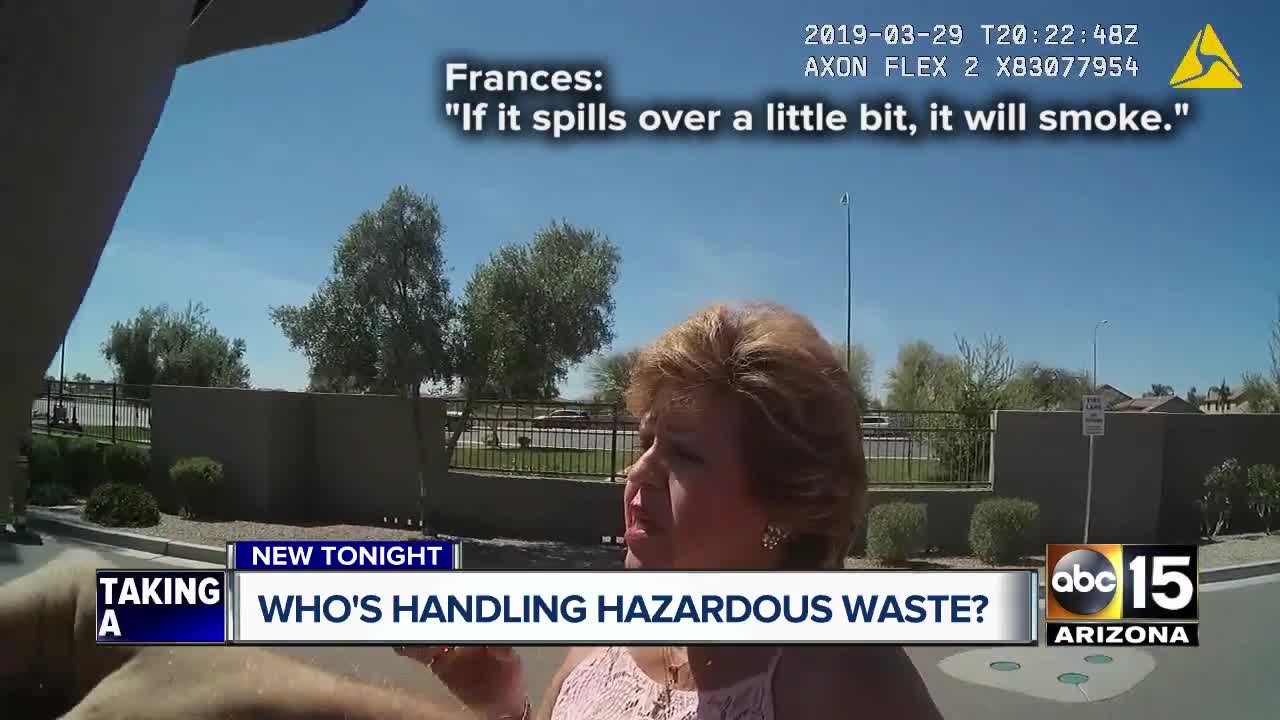 Frances Vierkoetter, the owner, has a history of violations when it comes to handling chemicals and biomedical waste,

CHANDLER, AZ — The state is investigating a Valley bio-hazard cleaning company after an accident in March forced an evacuation in a Chandler neighborhood and sent a police officer to the hospital.

It’s the same owner the Let Joe Know team investigated last year involving a different business. Both incidents involve employees, training and background checks. And it raises questions about whether the businesses are putting the public in danger.

Police say a driver for Precision Global Services was involved in a hit-and-run accident on March 29 near Arizona Avenue and Queen Creek Road.

After fleeing the scene and ditching an unmarked box truck at the entrance of a nearby apartment complex, police say the driver reappeared back on the scene as firefighters tried to figure out what chemicals were causing smoke to escape the back of the truck. See chopper video from the March 29 incident below.

There were no injuries reported, but firefighters at the time said one Chandler police officer who was first on scene to investigate the crash was exposed and taken to the hospital.

Investigative reports show the truck had no placards or manifest on board despite carrying several 55-gallon drums of a phosphorus-water mixture and many gallons of other flammable chemicals. It was later determined that the phosphorous is what was likely causing the smoke.

In addition, truck driver Scottie Oreo Hall was driving on a revoked license and two open warrants for his arrest, according to police.

Last year, the Let Joe Know team reported on a different employee of that company, who was arrested for fraud, burglary, and credit card theft of a deceased woman whose remains the company had been hired to clean up. In that case, police reports describe surveillance video of the employee, Deborah Claywell, using the credit cards while wearing a Clean Scene t-shirt, and driving a marked company van.

The family of the deceased woman told us Vierkoetter assured them that employees were background-checked prior to being hired by the company. But the Let Joe Know team found that Claywell had several prior arrests for charges ranging from drugs, to child abuse, to traffic violations. Vierkoetter told us Claywell’s background check came back clean when she was hired. Her trial is scheduled to begin in June.

The companies don’t just deal with chemicals. Clean Scene was contracted by cities across the Valley to clean and pick up bio-medical waste, possibly allowing them in sensitive areas.

The City of Peoria contracts with them to clean crime scenes, homicides, police vehicles and evidence labs, according to city documents. A contract with the Town of Gilbert shows they are used to clean bio-medical waste, police vehicles, tactical and weight rooms, and the destruction of sensitive documents. The City of Glendale has contracted with them to pick up medical waste.

The City of Phoenix also contracted with Clean Scene to pick up bio-medical waste. But documents obtained through a public records request show the City had problems with them almost from the beginning of the contract in 2018. By January 2019, city officials held a meeting with Vierkoetter after fire houses around the city had not received red medical waste bins that the company had been contracted to drop off.

Documents show Vierkoetter provided assurances that all bins would be delivered by the end of January. But by the beginning of March, emails between fire department officials and Vierkoetter show many still had missing bins and some that were in place were, “full” and “overflowing.” One fire captain wrote, “This is a big deal for us with infectious control, not only with our members but anybody from the public that might come to the stations.”

The requests for bio-medical waste pickup service continued until April 5, when emails show Vierkoetter’s reply that she would “be out personally” that next Sunday morning to “pick up bins, and get these issues rectified.”

That same day, records show concerned firefighters alerted the city to Clean Scene arriving to pick up bio-medical waste in a U-Haul truck.

In an email, a firefighter explains, “I believe we may be out of compliance with this as a Med Waste Generator. Not to mention that citizens could be renting a uhaul (sic) that was used to transport med waste without even knowing it.” Pictures that appear to show Vierkoetter and another worker loading a U-Haul with the red waste bins were also forwarded to the City.

Let Joe Know attempted to set up an interview with Vierkoetter about the accident and the U-Haul incident. She declined. In an attempt to get some sort of response, we stopped by Clean Scene’s Chandler office.

After denying truck driver Scottie Oreo Hall worked for her, she told us that a background check was performed. Investigation records show she told police that Hall had been hired two days prior to the accident, received no training, and had “not yet undergone” a background check.

We asked her about using a U-Haul to transport waste. She did not answer, instead replying that she would have to “set up” some time with us.

A few days later we received an email saying that her insurance company advised her “not to interact with you at this time.”

On April 11, the City of Phoenix suspended Clean Scene’s contract. Two days after we requested the public records — April 25 — the contract was terminated.

The Arizona Department of Environmental Quality, which regulates bio-hazardous waste transporters, is investigating Clean Scene, but says that Precision Global Services — the company involved with the March hazardous material accident — is not registered with them. That company was cited with 45 USDOT violations related to transporting hazardous materials.