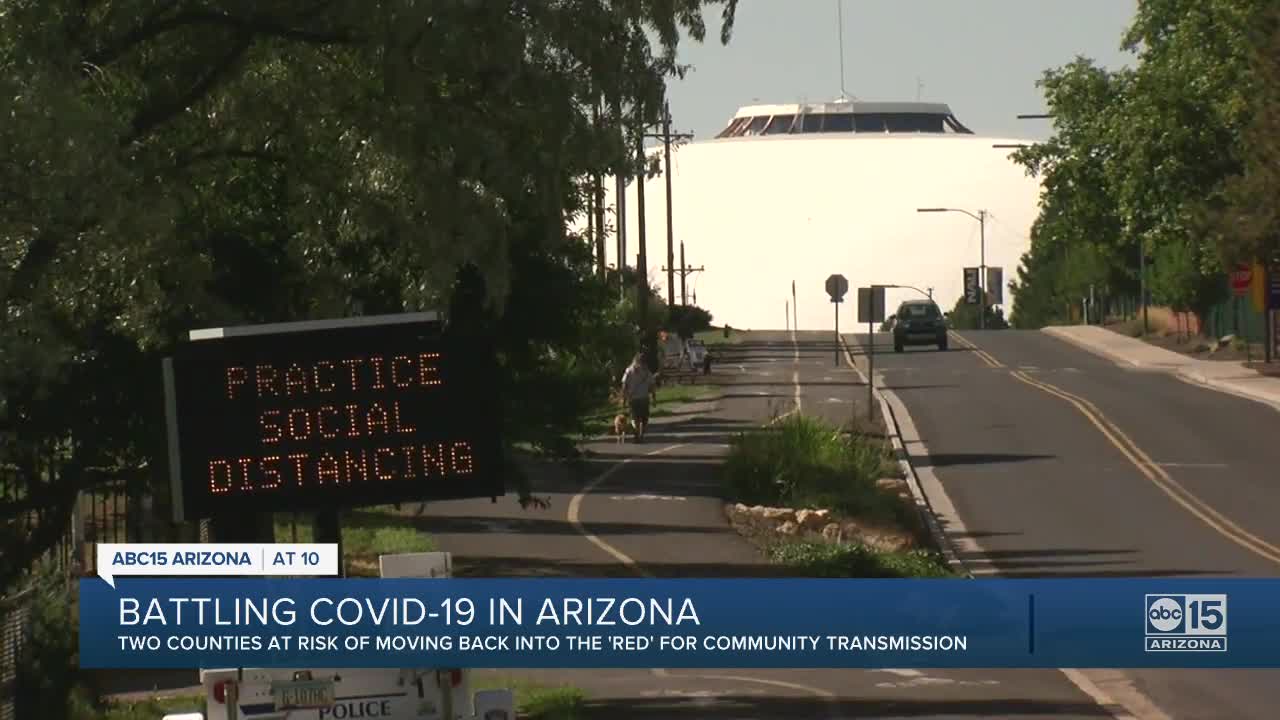 Coconino County says they are waiting for guidance and direction from the state's health department as they will likely be moving back into the substantial level of community transmission category next week.

FLAGSTAFF, AZ — Coconino County says they are waiting for guidance and direction from the state's health department as they will likely be moving back into the substantial level of community transmission category next week.

A spokesperson for Coconino County tells ABC15 that they received a phone call from Arizona's Department of Health Services telling them that the community transmission will be back in the red due to the county's increase in cases per 100,000.

"Coconino County has seen a rise in positive COVID-19 cases as a result of increased testing throughout the county. This has provided a better understanding of the burden of disease within the community," a spokesperson wrote.

In an email, county officials went on to say, "we await guidance and direction from AZDHS regarding what this move to the Substantial category will mean for local businesses in terms of the additional mitigation measures they will be required to follow and will assist in sharing the state's message and guidelines."

The move into the substantial category can be considered the wrong direction, especially as school districts like Flagstaff Unified School District are expected to review plans for phased-in returns to school at an October 6 meeting.

In a news release, FUSD said they will continue with remote learning for several more weeks, "Governing Board determined that students will remain in remote learning through at least the end of Fall Break on October 19, 2020. Schools may return to in-person learning in a phased process if health benchmarks are in the Minimal (Green) or Moderated (Yellow) categories in the areas served by FUSD."

Data shows that cases in the FUSD zip codes have gone up — there are 288.3 cases per 100K people.

Back in August, state leaders put out metrics for businesses to reopen based on data from the health department. The guidelines for businesses like dine-in restaurants and bars was anything in the 'substantial' category would stay closed.

"To me, standards are standards, and if you're going to set standards, you should use them, but if you decide you don't like your standards, then change them," said Will Humble, the state's former top public health director.

Humble said the state needs to be clear on what the standards are for the public and businesses, "they need to plan for staffing, they need to plan for how much alcohol to order, how much food to order. And if they're going to get shut down suddenly, they need to know that in advance, and one of the ways you would know that is by looking at the standards that have been developed and so that's why it's important that if you're going to have standards to be clear what they mean."

Governor Doug Ducey made it clear in his Thursday COVID-19 press conference that Arizona is open — that includes the economy, schools, and tourism.

"The expectation is they are going to remain open," he said.

A spokesperson for the governor's office tells ABC15 that guidance set back in August was intended to drive down numbers, and that guidance was given when we were in a different place.

State leaders have said in the past that they will work with counties individually if cases go back up. However, Governor Doug Ducey nor Dr. Cara Christ have provided any detailed roadmap or metric system that they are following.

Pima County is also expected to go back into the substantial category next week.