2019 Cactus League Spring Training guide to baseball in Arizona: Everything you need to know

PHOENIX — Spring Training is back in Arizona!

Whether you're cheering for one of the 15 teams that play in the Cactus League, or all of them, or just want to enjoy a hot dog, a cold beer and a bag of Cracker Jack, here is a quick and easy-to-read guide to each of the Valley's 10 baseball stadiums -- especially where they're at and how to get to them. 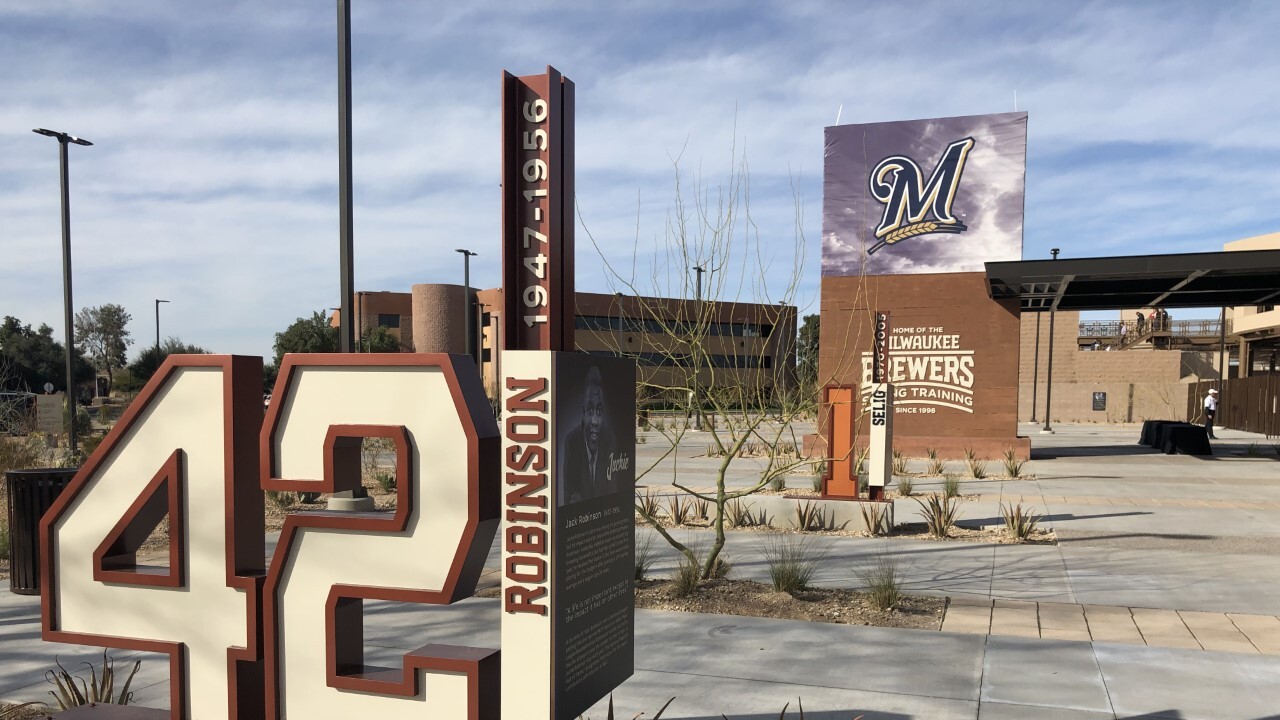 The stadium where the Milwaukee Brewers play has undergone the biggest transformation ahead of this year's Spring Training season -- $60+ milion worth -- to include an updated entrance, a new team shop, and a name change: American Family Fields of Phoenix.

Fans arriving to the stadium will notice a new main entrance, clubhouse building and team shop. A new scoreboard replaced the old one in left field. The concourses along the First and Third baselines were widened, the bathrooms were updated, and concession stands were renovated. The bench-style seats were replaced with stadium seating.

What's new this year? Besides the renovations, the concession stands will have some new items: Buffalo chicken nachos; Wisconsin fried cheese curds; BBQ mac and cheese; Bratcho, fresh-fried kettle chips with nacho cheese and bratwurst slices; and the County Stadium-style footlong brat, which is a footlong bratwurst served with hot Sauerkraut and a secret sauce. 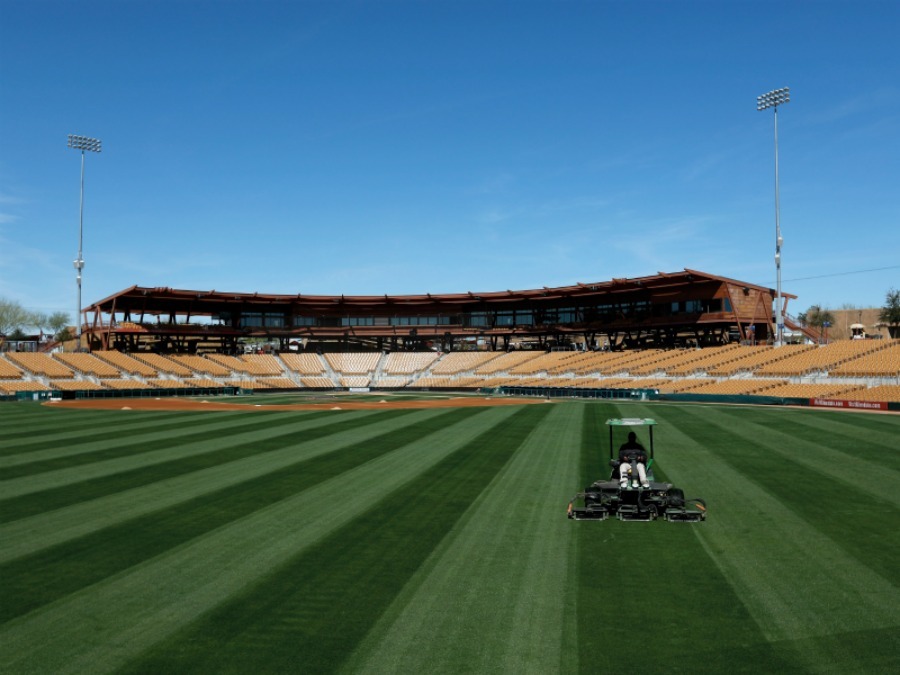 This year, the stadium will have free W-Fi for fans. Last season, they added more shaded areas and a video board, according to Scott Carter, director of marketing and corporate partnerships for the stadium. 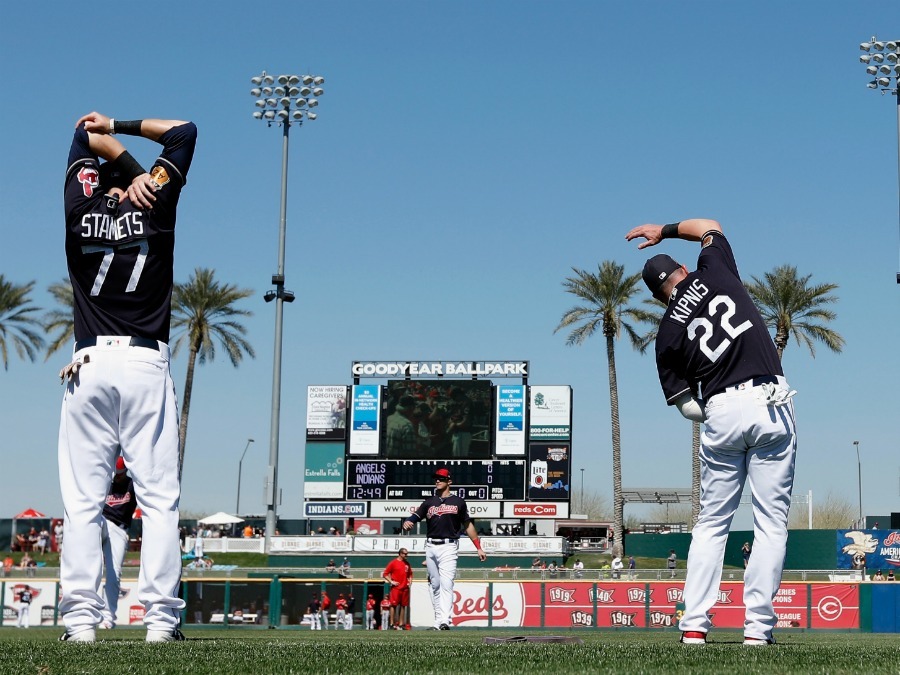 The Cleveland Indians and Cincinnati Reds play their Spring Training home games at Goodyear Ballpark, which will celebrate 10 years in 2019.

Both teams will also offer special "fan experience" packages where fans can either participate in an on-field workout or clinic, meet a couple players, and watch batting practice. Those packages range from $80-$130 per person.

To celebrate the 10-year milestone, the stadium will unveil a new mascot on Opening Day, Feb. 23. Starting on March 2, the first 50 kids, ages 3-12, to get a wristband from Guest Services will be able to participate in a pregame on-field activity (available at Saturday games only).

What's new this year? The stadium will have new snacks and treats for fans, including a Hatch green-chile burger, mini corn dogs, garlic fries, Funnel Cake fries, Philly Cheesesteak dog, and Hatch green chili-infused chicken sausage. They also added a shaded bar, called Craft Beer Corner, along the Third base line that will have beers from Arizona and Ohio. 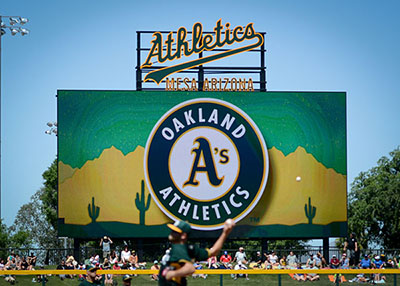 HoHoKam Stadium is the Spring Training home of the Oakland Athletics.

The address is 1235 N. Center Street in Mesa. The current stadium opened in February 1997. It has 7,500 seats and room for another 2,500 people on the lawn, according to its website. The Athletics began playing at the stadium in spring 2015, after a year-long renovation of the stadium after the Cubs moved to Sloan Park.

Parking is $5 and $10 for RVs and oversized vehicles.

The San Diego Padres and Seattle Mariners each play their home games at the Peoria Sports Complex, which is northwest of Phoenix.

The baseball complex is located at 16101 N. 83rd Avenue in Peoria within the city's "P83" entertainment district.

What's new this year? Fans can make their own burger at "Burgers on Deck" burger bar.

Scottsdale Stadium is the Spring Training home of the San Francisco Giants.

The stadium’s address is 7408 E. Osborn Road in Scottsdale.

Paid parking is available at parking structures near the stadium. The city will also have a free trolley that will pick up and drop off people at the stadium. The shuttle begins 90 minutes before each game and ends 30 minutes after. You can catch the shuttle at the Loloma Station, at Fashion Square Mall near Nordstrom, or along Fifth Avenue, according to the website. View trolley map. 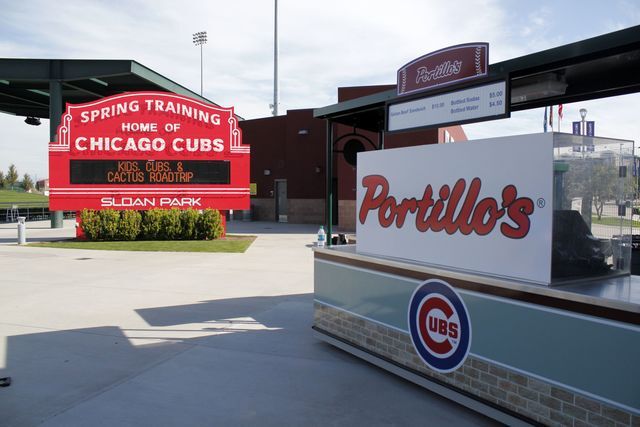 Sloan Park is one of the newer Spring Training facilities in the Valley. It opened in 2014.

The ballpark is located at 2330 W. Rio Salado Parkway in Mesa, not far from the Tempe Marketplace shopping center.

Tickets vary between $14-$94 depending on whether fans sit on the lawn or reserve a seat, as well as who the Cubs are playing. Tickets can be purchased online, at the Sloan Park ticket office, or over the phone at 800-843-2827.

The stadium features a Sloan-ified version of the iconic red "Wrigley Field" sign. Take a photo tour of Sloan Park.

Parking $5 for general parking, $10 for reserved parking, and $14 for buses and RVs.

Here is the signature item for @Royals and @Rangers Spring Training games this year: the "Double Dog Dare You."

The Texas Rangers and Kansas City Royals each play at Surprise Stadium during Spring Training.

What's new this year? This season's signature item is the "Double Dog Dare You" hot dog-sandwich. Admittedly, I'm not really sure if it's a hot dog or a sandwich, or both. It features two 11-inch hot dogs stuffed inside a foot-long loaf of bread and is topped with bacon, chili, nacho cheese, shredded cheese, diced onions, jalapeños, and tortilla strips.

Fans can also upgrade their tickets or purchase tickets to the "Legends Deck," which includes a meal from local restaurants, a drink voucher, access to flat-screen TVs and a private bar.

The Arizona Diamondbacks and the Colorado Rockies both play at Salt River Fields at Talking Stick, part of the Salt River Pima-Maricopa Indian Community.

Just up the street, Medieval Times is in the process of building its castle to host its dinner-theater show, which is expected to open this summer.

Tempe Diablo Stadium is the Spring Training home of the Los Angeles Angels.