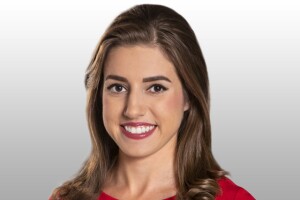 Jamie Warren joined ABC15 as a multi-media journalist in June of 2018. She is happy to be back home telling stories in the community she grew up in!

Jamie started her television career at the ABC affiliate KVIA-TV, which covers the border cities of El Paso, Las Cruces and Juarez. She spent two years as the station's only southern New Mexico reporter, where she won second place in the Texas Associated Press Broadcasters Awards for her story uncovering low ridership for a tax-payer funded bus service. She was then promoted and spent a year as the station's weekend morning anchor, producer and reporter in El Paso.

Jamie earned her journalism degree at the Walter Cronkite School of Journalism and Mass Communication at Arizona State University. She was an anchor and reporter for “Cronkite News”, which airs on Arizona PBS. While in school, Jamie won a Broadcast Education Association Award and a Rocky Mountain Emmy Student Production Award for her reporting.

Jamie grew up in Peoria. She enjoys spending time with family and traveling.