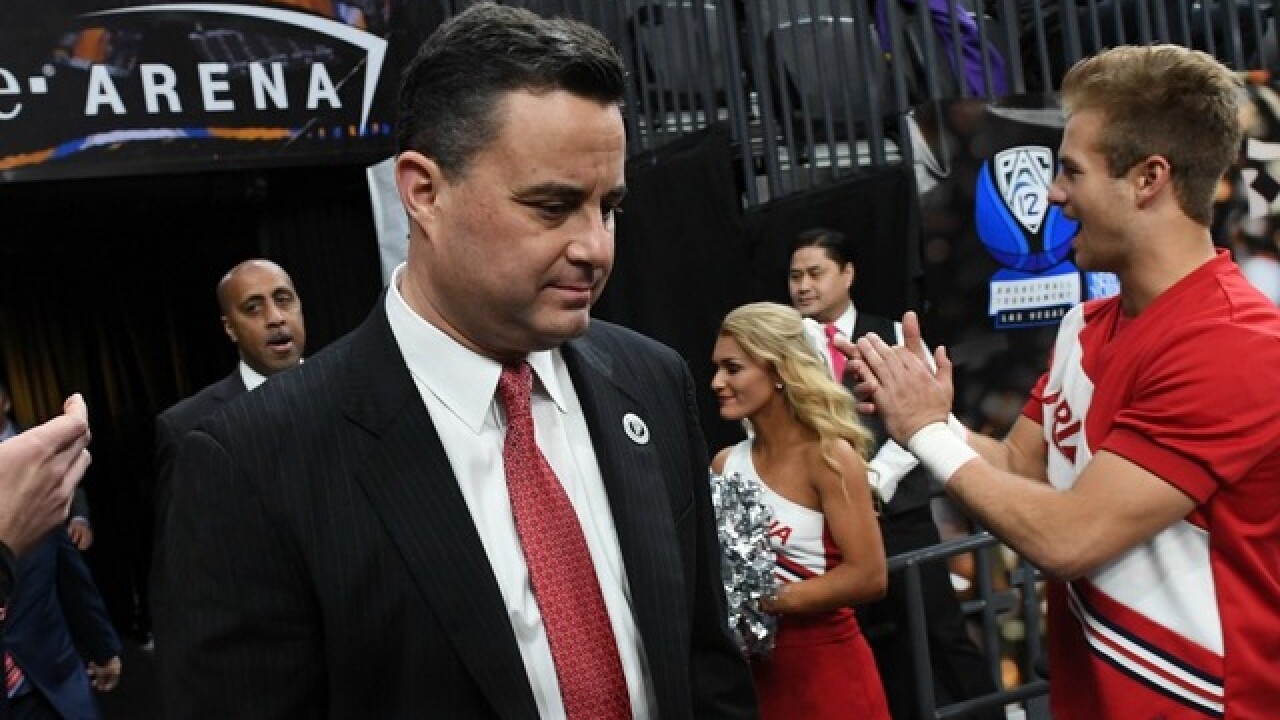 Copyright 2018 Scripps Media, Inc. All rights reserved. This material may not be published, broadcast, rewritten, or redistributed.
Ethan Miller
<p>Head coach Sean Miller of the Arizona Wildcats walks onto the court before a semifinal game of the Pac-12 basketball tournament against the UCLA Bruins at T-Mobile Arena on March 9, 2018 in Las Vegas, Nevada. The Wildcats won 78-67 in overtime. (Getty Images)</p>

In the days that followed, Miller and Ayton refuted the report, with Miller making an official statement in which he called the report false and defamatory. But in addition, journalists from several top publications -- including 247Sports writer and Fox Sports 1 college basketball insider Evan Daniels -- claimed ESPN's report didn't add up.

"In terms of that report -- the initial report -- we proved that there were some fallacies in it," he said. "Some of the things that were said to have been said on wiretaps couldn’t have happened the way that that report said (they happened)."

Schlabach reported FBI wiretaps revealed Miller discussing a payment to Ayton with Christian Dawkins, a runner for sports agent Andy Miller. ESPN, however, corrected the timeline of that conversation three times in the following week, eventually returning to its original timeline.

"The timeline was off. Christian Dawkins was never associated with Deandre Ayton. There were just a lot of holes in that deal," Daniels said. "Obviously it hurt Sean Miller’s reputation after already dealing with a lot with the FBI, and it certainly ripped apart their 2018 recruiting class."

Indeed, the fallout from that ESPN report, as well as the initial September FBI report that led to the arrest of Emanuel "Book" Richardson, have cost the Wildcats a number of potential top recruits for next season. After ESPN's report was released, UA's two remaining commits for 2018-19, Shareef O'Neal (Shaq's son) and Brandon Williams, decided to decommit from the Wildcats.

But even though the Wildcats' cupboard for next season is currently bare -- and even though the head coaching job at Pitt, whom Miller played for, is open -- Daniels doesn't expect Miller to leave Tucson for his alma mater or any other school after this season.

"I don’t think there’s any reason to believe Sean Miller’s not going to be the head coach at Arizona next year," Daniels said. "They’re going to have to rebuild. Next year is going to be a rebuilding year. But you can rebuild Arizona a lot quicker than you can rebuild a Pittsburgh.

"It’s going to take them some time and they’re going to have to have some transfers this year and some stop-gap players. But look, Arizona’s a very appealing brand. Sean Miller’s obviously a tremendous basketball coach. And there’s an appeal to go to Arizona, and they’ve done a really good job recruiting -- not just the west coast, but recruiting nationally.

"They’re going to take a little bit of a hit just because I think from a reputation standpoint they (already) have. But I think they can get back to recruiting at a high level. Without that FBI investigation, they probably have their best recruiting class of all-time."

In terms of recruiting, Daniels said the Wildcats could continue to be hampered by the lingering possibility that the NCAA may issue sanctions against UA for Richardson's actions. But in the long-term, Daniels believes Miller and the Wildcats can climb back to where they want to be, as perennial national championship contenders.

"Any time you have uncertainty, it impacts recruiting. But at the same time, we don’t know if there are even going to be (any sanctions) going forward," he said. "The FBI investigation involved a now-former coach and potentially a player that’s committed to another school. I’m not sure that’s going to impact them moving forward.