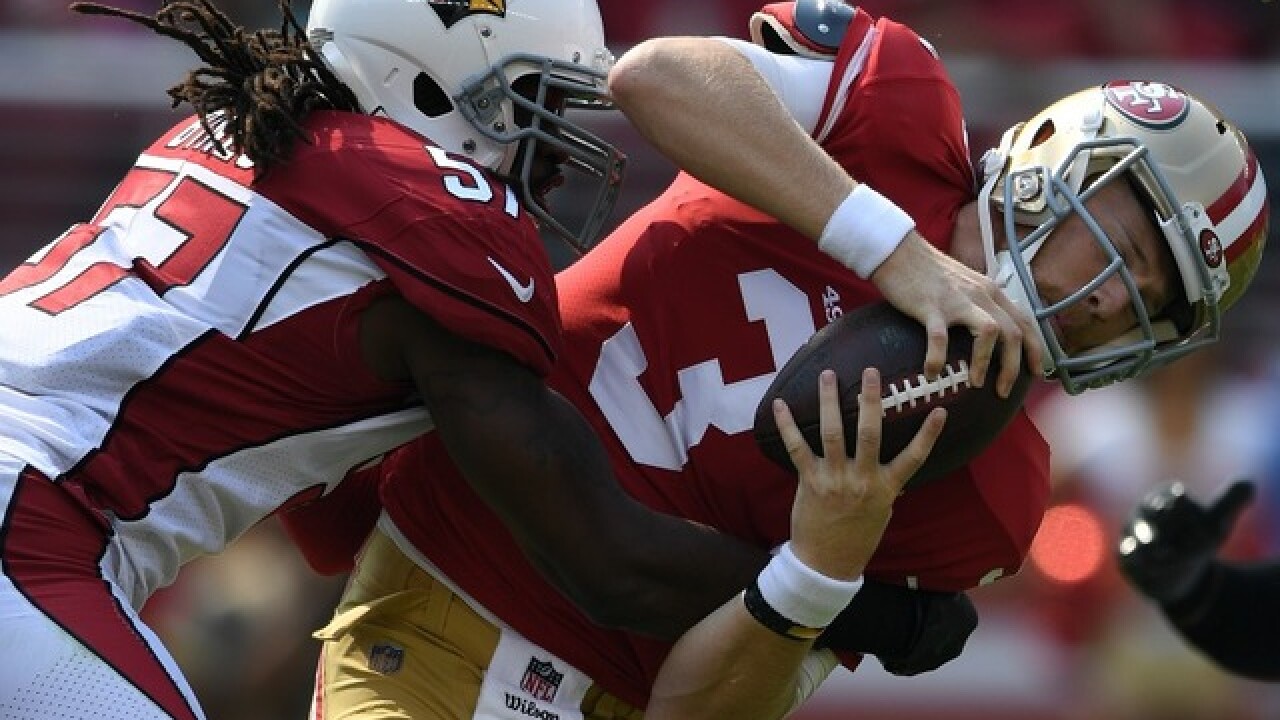 Copyright 2018 Scripps Media, Inc. All rights reserved. This material may not be published, broadcast, rewritten, or redistributed.
Thearon W. Henderson
<p>Josh Bynes #57 of the Arizona Cardinals sacks of C.J. Beathard #3 of the San Francisco 49ers during their NFL game at Levi's Stadium on October 7, 2018 in Santa Clara, California. (Getty Images)</p>

Eight weeks into the season, the Arizona Cardinals are still looking for their first home victory of the season.

The San Francisco 49ers, whom the Cards beat Oct. 7 for their first and only win of 2018, could present the perfect opportunity.

Can the Cards get it done amid the off-field distractions they've endured in the last week? Here are a pair of predictions for Sunday's matchup in Glendale.

Most Suns fans remember when Terry Porter became the team's head coach in 2008. Porter's slow, methodical style shackled the Suns' high-powered offense -- and when he was fired midseason, interim head coach Alvin Gentry went back to former coach Mike D'Antoni's run-and-gun style, and it paid off.

I think the same phenomenon, albeit to a lesser degree, is about to happen with the Cardinals after shedding offensive coordinator Mike McCoy and his unimaginative strategy. The promoting of former head coach Bruce Arians' protege Byron Leftwich to the position will serve to unleash the talented players the Cards possess on offense, including David Johnson, Larry Fitzgerald and rookie Christian Kirk.

Yes, the Cardinals have a number of other problems to address, including a mediocre (at best) offensive line and a rookie quarterback still feeling his way through his first NFL season. But Leftwich's play-calling, combined with a pass defense that led the Cards past the 49ers three weeks ago, should be enough for Arizona to get its first home win of the season. Cardinals 28, 49ers 23

I'd love to say I believe in Byron Leftwich as the Cardinals' OC -- but he's called as many regular-season NFL plays as a coach as I have! Josh Rosen was impressive against the 49ers several weeks ago, but last week he was downright dreadful against Denver.

Cardinals fans should hope Leftwich schemes to have his two best players involved: David Johnson and Larry Fitzgerald. But truthfully, if I was a defensive coordinator, I'd stack the box to shut down the running game and make Rosen beat me. On defense, can Arizona slow down San Francisco's running game? Based on what I've seen lately, I doubt it.