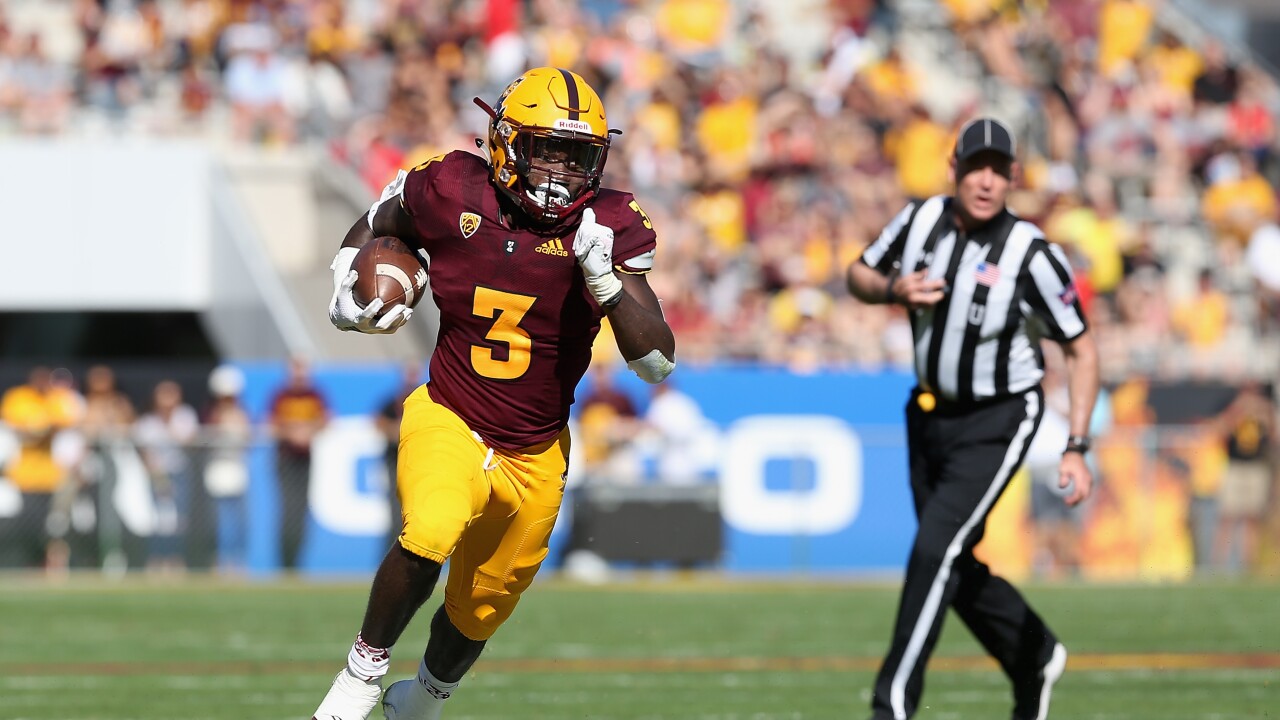 Look, let’s be honest here… Herm Edwards will have the Arizona State Sun Devils ready to play the role of spoiler, but the Oregon Ducks are ranked #6 for a reason.

I do like the fact that Oregon has already clinched the PAC-12 North, so the Ducks are now playing for inclusion in the College Football Playoffs. Why do I like that fact? Because the Ducks are feeling pretty confident they can come into Tempe and walk away with a win.

Is it possible? Probably!

Arizona State is playing for Bowl eligibility, so they have a lot on their plate this week, if they’re going to play like they did at Michigan State. Oregon will also have a tough time accounting for the ASU defensive alignments, because the Sun Devils are constantly trying to cause confusion, disruption and pressure.

That said, the Ducks “O” Line is one of the best in the country and quarterback Justin Herbert was once a Heisman Trophy candidate.

And let me add this nugget of miscellaneous stuff:

The Sun Devils defense has allowed just one fourth-quarter touchdown over the last seven games (at Utah) and are allowing just 3.3 points per fourth quarter against FBS opponents this season, 5th-lowest nationally.

Offensively, the Sun Devils have a lot of weapons: quarterback Jayden Daniels, running back Eno Benjamin and receivers Brandon Aiyuk and Frank Darby.

However, the Devils offensive line is a major red flag. Brandon Aiyuk has 1,583 all-purpose yards this season on just 78 total plays for a rate of 20.3 yards per touch, which is third nationally. The six FBS players ahead of him in all-purpose yards are all running backs with at least 178 touches.

If ASU can't protect Jayden Daniels or open running lanes for Eno Benjamin, it has no chance.

Interesting side note: Over the last several years, running the football has been key to success:

My guess is that ASU hangs around and keeps it close, long enough to have us all believing they can win the game, but in the end, the Sun Devils are still a young team and the Ducks are clearly the “better” team. Oh, and Oregon is favored by anywhere from 13.5 – 16 points.

It's not the end so much as the path ASU has taken to get here - that's what's been so frustrating about the 2019 Sun Devils season - a season that's now in jeopardy of dropping below the .500 mark when 6th ranked Oregon visits Tempe Saturday (Watch at 5:30 p.m. on ABC15).

Playing more freshmen and sophomores than just about any team in the country, most ASU fans would have barely mustered a shoulder shrug prior to the season if the crystal ball unveiled a 6-6 final record in Herm Edwards' second season at the helm of the Sun Devil program. But when a 5-1 start and a 17th ranking in the AP Poll turns into a 6-6 record (or worse) - well, let's just say fans are a little more rankled.

So, now ASU gets to play, what the players this week agreed, could be a "season defining" game against an Oregon team that along with Utah is the class of the Pac-12 in 2019. The Ducks are 9-1 and many believe control their own destiny to return to the college football playoffs for the first time since 2014. Are they on a steamrolling mission to that end goal Saturday against the Devils will they have one eye on the ultimate prize and leave themselves susceptible for what would be a titanic upset in Tempe? For a reeling ASU squad that's lost four straight games, if it's the latter, the Devils may have a chance.

ASU will need big plays in the passing game and return game from Brandon Aiyuk to be sure but the more Jayden Daniels and running back Eno Benjamin can extend drives with the their legs and move the chains , thus keeping the ball away from Oregon quarterback Justin Herbert, the Sun Devils chances of an upset will increase.

It's a night game at Sun Devil Stadium on ABC during primetime with Kirk Herbstreit and Chris Fowler in the booth. These sort of peripheral intangibles shouldn't matter, but often times they do for an underdog home team in need of any sort of spark to get them to play above and beyond their capabilities. The Sun Devils have been dreadful in recent first quarters. Maybe the primetime, national television lights will spur them to play a little better in the opening quarter. If Oregon jumps out to an early lead Saturday night, turn out the lights, the party's over.

Oregon has Herbert at quarterback and plenty of weapons on offense but that unit is anchored by perhaps the best offensive line in the country. Defensively, the Ducks are stout, holding six opponents this season to 10 points or less. No Ducks team has accomplished that since 1960.

A lot of talk about an upset Saturday in Tempe but I don't see it. Oregon's come too far to let their guard down against a skidding ASU team.