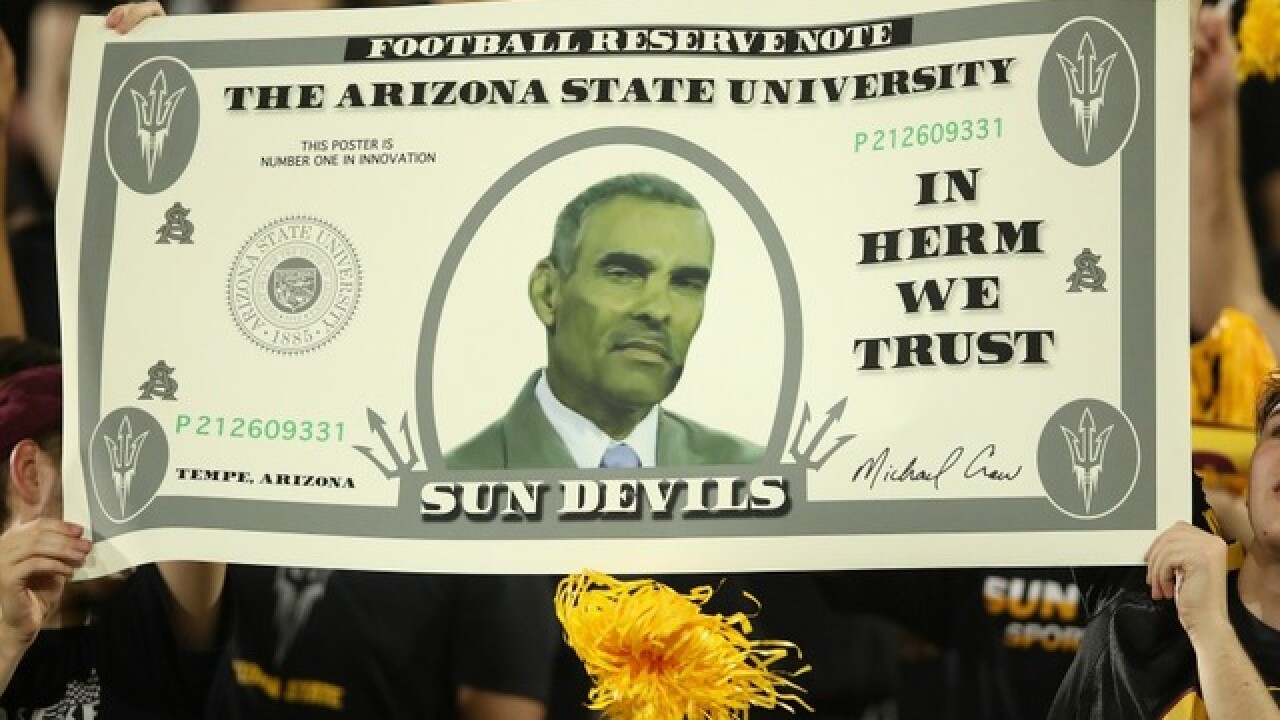 Copyright 2018 Scripps Media, Inc. All rights reserved. This material may not be published, broadcast, rewritten, or redistributed.
Christian Petersen
<p>Head coach Herm Edwards of the Arizona State Sun Devils is displayed on a 'money sign' from fans during the second half of the college football game against the Michigan State Spartans at Sun Devil Stadium on September 8, 2018 in Tempe, Arizona. The Sun Devils defeated the Spartans 16-13. (Getty Images)</p>

The knock on Herm Edwards' hiring at Arizona State was his time away from the game. Edwards had not coached since being fired by the Kansas City Chiefs in 2008 and spent eight years at ESPN, so the thinking was that there was no way he could be successful as a college coach.

Wrong. Edwards may not have been on the sideline, but he was studying the game, even coaching it -- at least in his mind -- in the television studio.

"A lot of people say I was away from football, but I wasn't away from football. I just didn't have a team to coach," Edwards said during his weekly news conference Monday. "When I watch a football game, I don't watch it as a fan. I watch it as a coach and I'm actually coaching the game. Do you know how many games I coached in Bristol? I was watching every situation."

Edwards' TV coaching has translated well in the desert.

Arizona State has opened the season 2-0 and already has a marquee win on its resume after knocking off No. 15 Michigan State on Saturday night. The Sun Devils went chest to chest with the big Spartans of the Big Ten, outlasting them in the heat to pull out a 16-13 victory on Brandon Ruiz's 27-yard field goal as time expired.

The Sun Devils entered the AP Top 25 for the first time since 2015 at No. 23 this week heading into their first road game, Saturday at San Diego State.

Not bad for a team with new coaches and new players that was picked to finish last in the Pac-12 South.

"I think our coaches and players have done a magnificent job of coming together," Edwards said. "It's hard when you change like this. It's always hard to change. When you get new players and new coaches on your staff, that's difficult and I think these guys have weathered that now and we've earned their trust."

The quick start has brought Arizona State back into national prominence.

The Sun Devils had a good run in Todd Graham's second season in 2013, reaching No. 11 in the AP Top 25. Arizona State climbed to No. 7 the following season and was being mentioned as a possible College Football Playoff team after opening the season 9-1. The Sun Devils dropped out of the playoff picture with a road loss to Oregon State and never really recovered.

Arizona State picked up some quality wins -- over No. 5 Washington last season -- but spent Graham's final three seasons mired in mediocrity, costing the coach his job.

The Sun Devils have been revitalized under the loquacious Edwards, routing UTSA in their opener and grinding out that physical win over Michigan State.

The key now is to keep the roll going.

"We have to continue to stay humble," Edwards said. "That last game we played, it could have gone a different way. We don't make a couple plays, the outcome of that game is different and I think the players realize that. We haven't played a complete game yet, on either side of the football. What we have done, is they play hard. Oh, they play hard."

Edwards has always been a great speaker, so motivating players was never really going to be a problem. What he's done so far is combine the ability to get his players to give maximum effort with proving his time away from the sidelines has not diminished his mind for the game.

In a contrast to his on-air personality, Edwards has been calm and even-keel with the Sun Devils, offering his coaches and players advice, getting on them when the time calls for it.

Arizona State got the ball in a tie game with nearly five minutes left and quickly moved the ball inside the Spartans' 10. Instead of ramming the ball into the end zone quickly, as the players and many of his assistants wanted, Edwards calmly told them to take a knee and set up for a field goal.

The Spartans had used all their timeouts and were helpless to stop the Sun Devils, who called time with 4 seconds left so Ruiz's kick would be the game's last play.

"You respect coaches because they're your coach, but you have to earn their trust," Edwards said. "I think our coaches have done that. I hope I've earned their trust so far. I'm still trying to work on that."

It's certainly working so far.