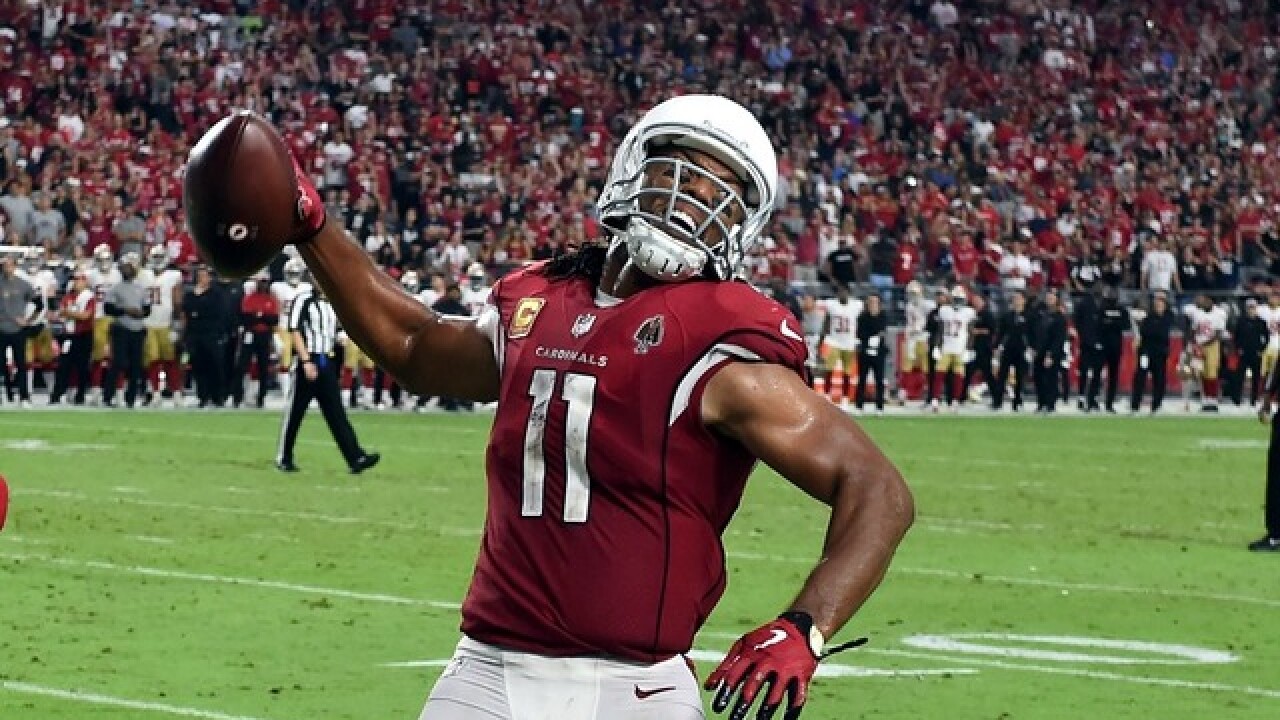 Copyright 2018 Scripps Media, Inc. All rights reserved. This material may not be published, broadcast, rewritten, or redistributed.
Norm Hall
<p>Wide receiver Larry Fitzgerald #11 of the Arizona Cardinals reacts after scoring a two point conversion during the fourth quarter against the San Francisco 49ers at State Farm Stadium on October 28, 2018 in Glendale, Arizona. (Getty Images)</p>

Few behave in a more professional manner on the field that Fitzgerald, who never engages in elaborate celebrations when he scores a touchdown. His customary procedure is simply to hand the ball back to the referee and return to the sideline.

Fitzgerald did just that when he scored a touchdown in the fourth quarter of the Cardinals' come-from-behind win over the 49ers on Sunday -- his 112th career NFL touchdown catch. But later, when he scored a two-point conversion to give the Cards a three-point lead in the game's final minute, Fitz flashed some rare emotion by viciously spiking the football to the ground.

A Fitz spike?!?! @LarryFitzgerald said that's the first he could remember spiking the ball. 😂 pic.twitter.com/n0EFWK2TTa

The Cardinals held on for an 18-15 win -- but Fitz's action caught everyone's attention, and it had us all asking: Has Larry Fitzgerald ever spiked the football before?

"I never spiked a ball before in my life," Fitz confirmed after the game,  before delivering a tongue-in-cheek explanation for the spike.

"I was a little frustrated. I had a heavy heart today. My oldest son Devin didn't want to come to the game today," he explained. "My feelings were a little hurt. I was carrying that around all day, so when I got in there, I kind of let it out.

"To all the kids that were watching: I'm sorry. I set a bad example today," he joked.

Fitzgerald explained Devin chose to go to the Arizona State Fair instead of coming to watch his father play Sunday.

"He didn't want to come support us," Fitzgerald said with a grin. "I'll try to pick up the pieces. I've got to be a better father."

In reality, Fitzgerald's emotional display likely stemmed from his team's 1-6 start to the season, which included four straight home losses. His two-point conversion, which followed rookie and Valley native Christian Kirk's game-winning touchdown catch with 34 seconds to play, had to feel extremely good, especially after last week's 35-point home loss to the Broncos.

"To be able to get a win at home, the first one in the season -- I never thought I'd say that, eight games in (to the season) -- it was good to get a win," Fitzgerald said.