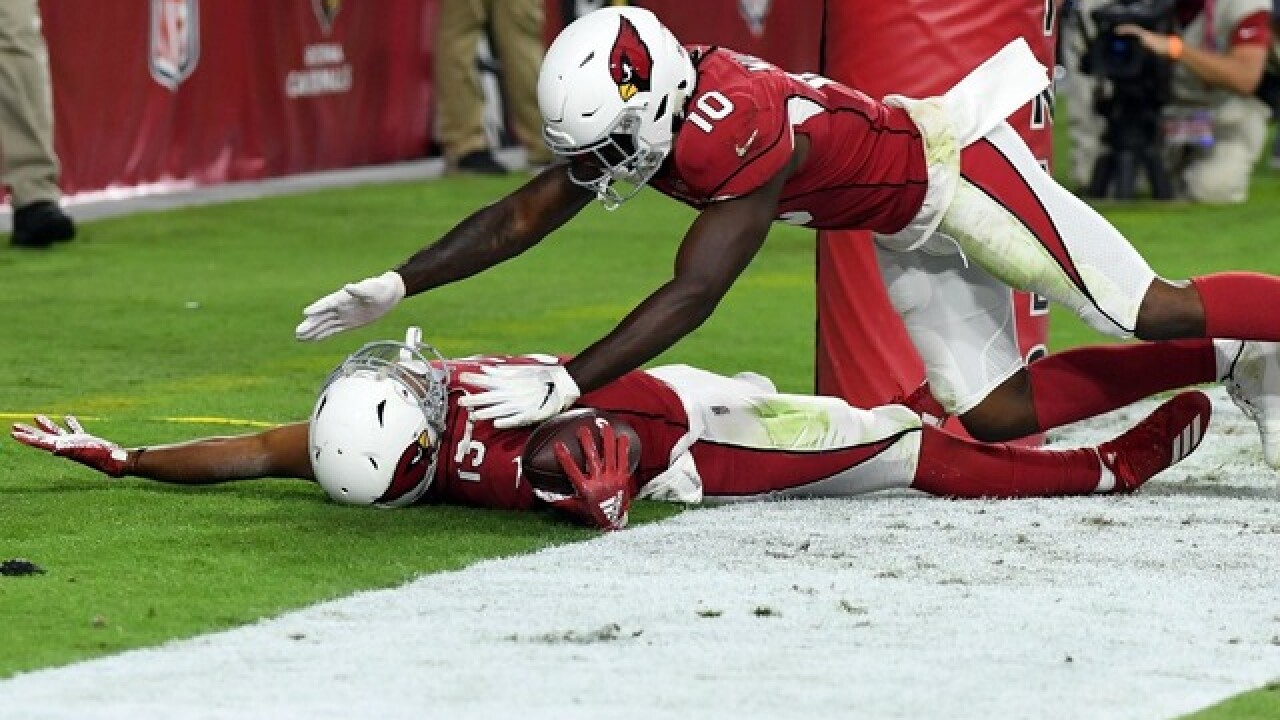 Copyright 2018 Scripps Media, Inc. All rights reserved. This material may not be published, broadcast, rewritten, or redistributed.
Norm Hall
<p>Wide receiver Christian Kirk #13 reacts with teammate wide receiver Chad Williams #10 of the Arizona Cardinals after scoring the game winning touchdown during the fourth quarter against the San Francisco 49ers at State Farm Stadium on October 28, 2018 in Glendale, Arizona. (Getty Images)</p>

The Arizona Cardinals got their first home win of the season thanks to some late-game heroics from their top two 2018 NFL Draft picks -- including a wide receiver from Scottsdale.

Scottsdale native and Saguaro High School alum Christian Kirk, the Cardinals' second-round pick in this year's draft, caught a 9-yard touchdown pass from first-round pick Josh Rosen with 34 seconds to play to rally the Cardinals past the 49ers 18-15 at State Farm Stadium in Glendale.

The Cardinals trailed 15-3 in the fourth quarter -- but a touchdown catch from Larry Fitzgerald (moving him into seventh in NFL history with 112 TD reception) trimmed the 49ers' lead to 15-10 midway through the quarter. Then, in the final minutes, Rosen marched the Cards down the field and capped off the drive with a game-winner to Kirk, followed by a two-point conversion to Fitz.

For the game, Rosen completed 23 of 40 passes for 252 yards, two touchdowns and one interception. Kirk caught three passes for 42 yards and his last-minute TD from his fellow 21-year-old.

The Cardinals moved to 2-6 on the season, while the 49ers fell to 1-7. Both of Arizona's wins this season have come against the 49ers.

When you need a big play, you know who to go to... pic.twitter.com/RnmklQ1rR0

He now has sole possession of 7th place on the @NFL all-time TD receptions list.

Oh, and it came in the 4th quarter!@LarryFitzgerald with the score! pic.twitter.com/T6qSC2Pz2d

The game was the first for Byron Leftwich as the team's new offensive coordinator. Leftwich replaced Mike McCoy, who was fired after the Cards' 45-10 home loss to the Broncos last week.

The 49ers attempted to get into field-goal range in the final seconds, but a poor snap with seven seconds to play sealed Arizona's win.

Running back David Johnson accounted for 100 total yards for the Cardinals in the victory. Johnson left briefly in the fourth quarter to be evaluated for a concussion, but he returned to the field on the Cardinals' game-winning drive. Cardinals head coach Steve Wilks said after the game that Johnson is fine.

The Cardinals are off next week. Their next game will be on Sunday, Nov. 11 at the Kansas City Chiefs.