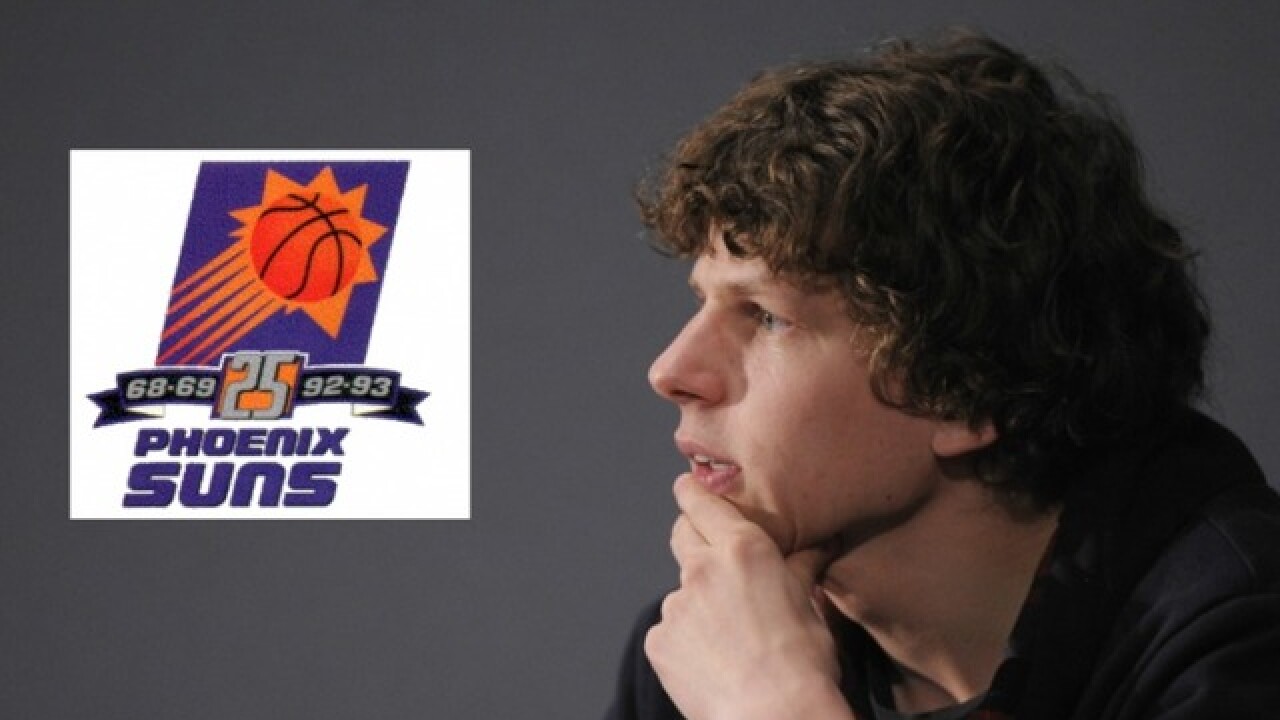 Perhaps no professional sports franchise in America has as many what-ifs throughout its history as the Phoenix Suns do.

From that infamous coin flip that cost them Kareem Abdul-Jabbar, to the Robert Horry hip check, to a crooked official, to a number of untimely injuries, the Suns, who are still in pursuit of their first-ever NBA title, seem like a cursed franchise for a number of reasons.

Well, it looks like we can add actor Jesse Eisenberg to the lengthy list of Suns curses.

In an appearance on the "Upon Further Review" podcast, the Academy Award-nominated actor and star of "The Social Network," "Zombieland" and dozens of other films said he blames himself for the Suns' loss to the Chicago Bulls in the 1993 NBA Finals. Why? Because of a fan letter he wrote to his favorite player, Dan Majerle, before the Suns' infamous Game 6 defeat.

In that game, Bulls guard John Paxson found himself wide open for a game-winning 3-point shot with just seconds remaining, giving Chicago a one-point victory and a 4-2 series win. It gave Michael Jordan and the Bulls their third straight NBA championship and sent Majerle, Charles Barkley, Kevin Johnson and the Suns to perhaps their most all-time painful defeat. To make matters worse, the Suns have yet to return to the NBA Finals since that season.

"So, what happened? Where did John Paxson's surge of confidence come from -- and how did Dan Majerle, a defensive master, so helplessly lose focus? It was me. I am responsible. Yes, I am the reason the Suns lost the NBA Finals that year," Eisenberg said.

Eisenberg explained that, when he was just nine years old and growing up in New Jersey, he and his friend Teddy were being bullied by a kid named Stephen. "I was distraught. I had never been bullied before. And while Teddy didn't seem to mind the abuse, I knew that I needed to take action to get back at Stephen," he said.

"And so, I decided to write a letter to my favorite basketball player, 'Thunder' Dan Majerle, asking him for help And though I was only nine years old, this fan letter would change the course of history."

I am a big fan of you. You're my favorite player. And I know that one day we will be playing as teammates on the Phoenix Suns. I know how to draw the logo, and I'm a great dribbler. But I am really in trouble right now, and you're the only one who could help me.

There's a kid named Stephen at school, and every day he throws mulch at my head, and also at my friend Teddy's head. It doesn't usually hurt, but sometimes it does.

I thought that if you could come to the school -- just at the end of the day when I'm waiting for the bus; you don't have to come for the whole day -- and pretend like we're best friends, and then when Stephen throws mulch, you can be like, 'Hey, don't throw mulch at my best friend Jesse and his friend Teddy.'

And then Stephen will be so scared -- especially because you're 6-foot-6 and 222 pounds and score 13.9 points per game -- that he will stop throwing mulch at my head, and then maybe he'll also think I was cool for having a friend like you, Dan Majerle, who is also my favorite basketball player. And then Stephen and I will become friends and I can finally stop hanging out with Teddy after school.

Eisenberg then imagines a scenario in which Majerle reads the letter before Game 6 and discusses it with Barkley, and both players become furious that Eisenberg would dare try to distract Majerle from his current task of winning a national championship.

"What if I need to play defense on an important play? I am paralyzed with rage because of Jesse from New Jersey," the hypothetical Majerle says.

At the same time, Eisenberg imagines Paxson receiving a letter from an injured fan wishing him good luck before Game 6, without asking for anything in return. "This child and his sensible note will allow us to win Game 6 of the NBA Finals against the Phoenix Suns," the hypothetical Paxson tells Jordan before the game.

The possible good news for Eisenberg is the Suns' luck appears to finally be changing, as they received the first overall pick in the NBA Draft for the first time in team history. Maybe, just maybe, the Suns will turn things around and soon win that elusive NBA championship -- and relieve Eisenberg of 25-plus years worth of emotional distress.