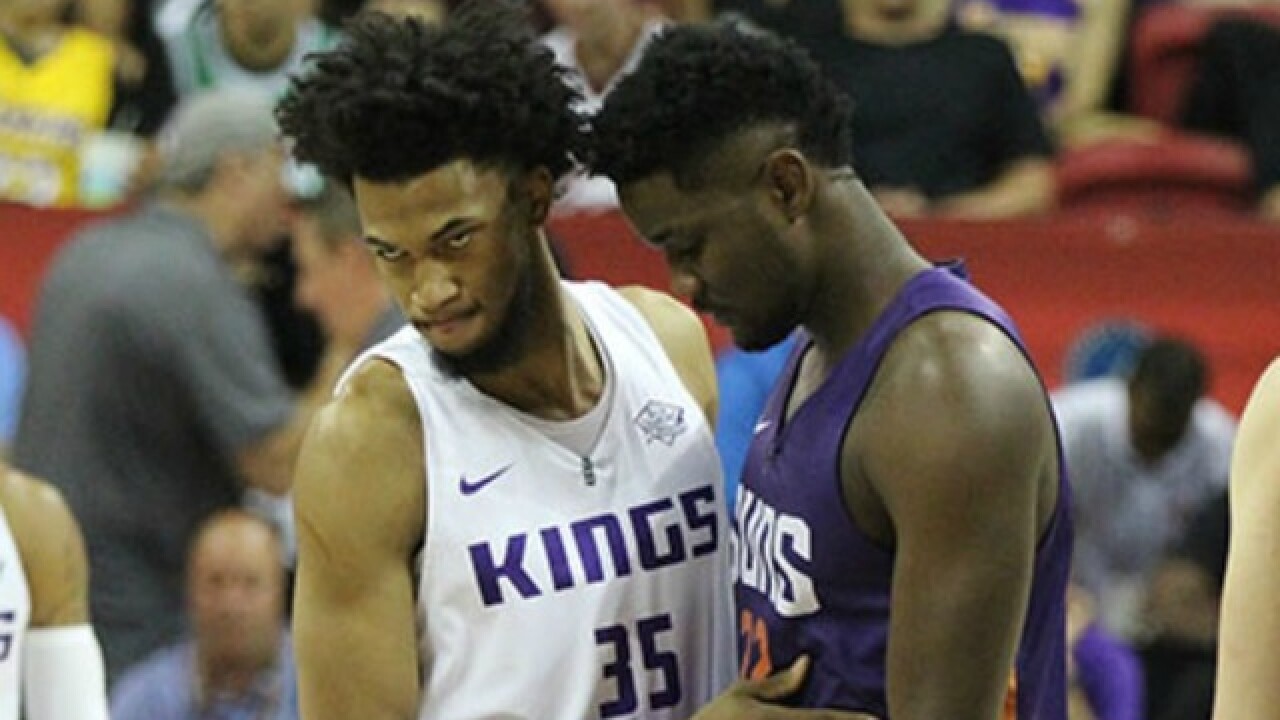 At his pre-draft workout with the Phoenix Suns, Tempe native Marvin Bagley III reminisced about watching his hometown team and seeing the players he emulates today -- like Amar’e Stoudemire and Jason Richardson -- go against the Los Angeles Lakers in the playoffs.

That day he was wearing purple and orange, sitting behind a glass podium at the Suns’ facility. He raved about the franchise while Suns general manager Ryan McDonough praised him. But as the public found out on draft night, the two parties failed to agree on one thing:

That day, Bagley called it “disrespectful” that his name wasn’t really in the No. 1 pick conversation, saying that if his favorite team growing up failed to take him with the top overall selection, he would hold a “lifelong chip” against them.

On Saturday, the lifelong chip was confirmed -- and it got even bigger.

“When I said it, I meant that,” Bagley told Cronkite News Saturday after the Suns beat Bagley’s Sacramento Kings 71-63 in NBA Summer League play . “That’s why I kind of hate when they get the win today. But it is what it is, I’m with the Kings. I’m all about Sacramento now, ever since they drafted me. I’m not thinking about anyone else but us.”

When the Suns went on the clock June 21, they passed on Bagley -- opting for his former Hillcrest Prep teammate Deandre Ayton. Bagley’s wait on draft night, though, was short lived -- the Kings took the 6-foot-11, 234-pound forward at No. 2.

During Saturday’s game, Bagley was able to give the Suns a first-hand view of what that chip looks like. However, with McDonough sitting in the first row and Suns owner Robert Sarver sitting courtside, it wasn’t quite the showing he imagined.

In 32 minutes of action, the former Duke star had 15 points and seven rebounds on 5-of-13 shooting. He could have had five points, that wasn’t the issue for him after the game. He was visibly frustrated each time he brought up the Kings’  loss to the media.

In his postgame press conference, the mature Bagley quickly turned a game that was hyped and promoted as Ayton vs. Bagley back into the less glamorous headline: Suns vs. Kings.

Sacramento is young. Its summer league roster is younger. But Bagley spoke like a 10-year veteran that just suffered a crushing playoff loss, not a rookie after his first summer league game.

Ayton, who tallied 21 points and 12 rebounds Saturday, has seen that side of Bagley for years. Despite Bagley moving on from Hillcrest just over a month after Ayton arrived there, the two are friends.

“He’s very vocal,” Ayton said of Bagley. “He’s going to take over that team, I know it.”

On the court, Bagley flashed the versatility many lauded him for around draft time. He was covering shooters on the wing and players in the post on defense. On offense, he brought the ball up at times and wasn’t afraid to take a mid-range jumper.

Oh, and then there were his battles with Ayton. The pair fought in the paint the way they did during practices at Hillcrest. Only this time, they were a lot bigger.

“He got a lot stronger. He’s not playing (around) on the glass,” Ayton said of Bagley. “He worked on his game a lot. I seen a few moves that he did. I was like, ‘Yo, those are NBA moves dude. Just keep doin' it.’"

Added Bagley: “I kind of had flashbacks. He’s a great player. It’s always good to go against him. Especially somebody that I played with before.”

Just a few weeks after the draft, Bagley has a bit more NBA experience than Ayton. Technically, Saturday was Bagley’s fourth game with the Kings. Recently, the team hosted a three-day event that included four teams called the California Classic.

In a trio of games there, the Arizona native averaged 8.6 points and 5.3 rebounds a game. Though the sample size is still small, Kings guard Frank Mason is already impressed with his new teammate.

Indeed he could be. He was able to dominate in his one season at Duke, earning National Freshman of the Year honors after averaging 21 points and 11 rebounds a game. But Bagley is a toddler even in NBA rookie terms -- at 19-years old, his peak seems far off.

The summer league is not a great gauge for how many all-star games someone will make, it’s a learning experience. And Bagley is using it as such.

“It’s a lot of learning. Just a lot of different terms,” he said. “You’ve got to see things a lot faster, learn things a lot quicker. That’s the big adjustment for me, is being able to catch on to it all and learn it. I feel like once I get that the game will slow down.”

Saturday may not have been Bagley’s best showing on the court, but it represented more for both the Kings and Suns. It was the inaugural matchup between the franchise cornerstones that just so happened to go to the same high school and get drafted to the same division.

Many on the West Coast are already licking their lips to watch the pair face off for real four times this year and quite possibly for many more to come.