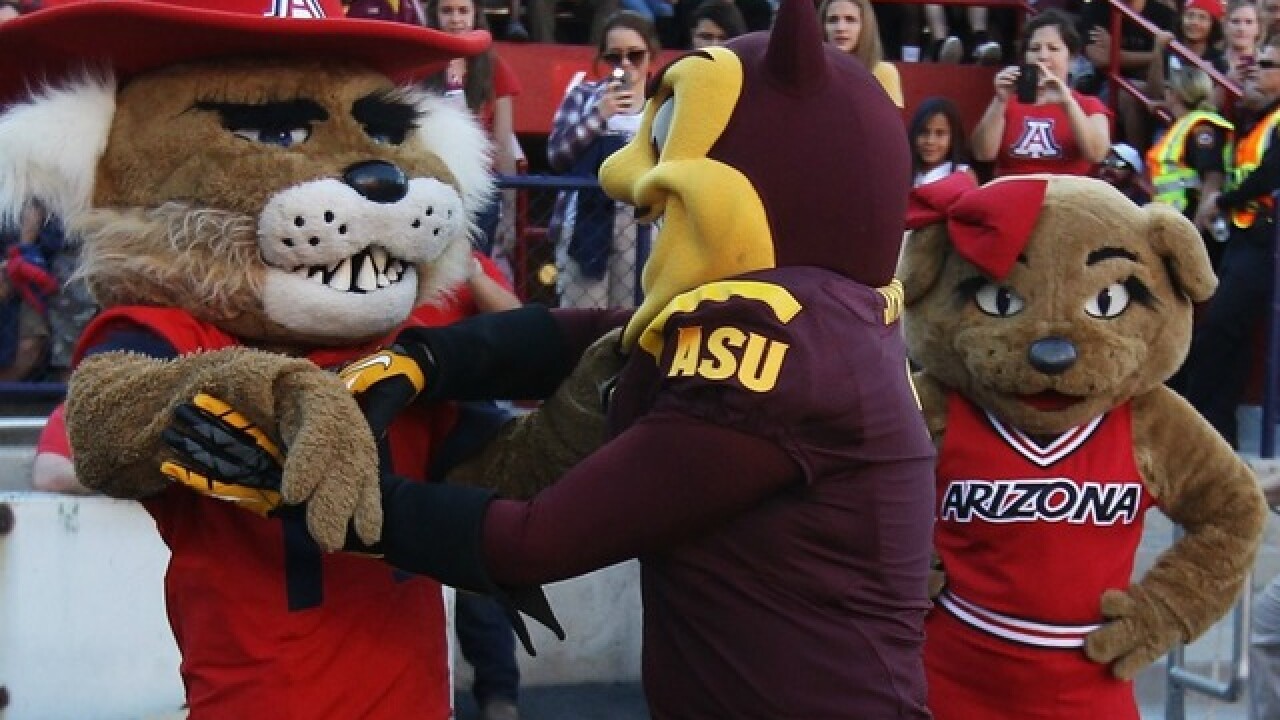 Copyright 2018 Scripps Media, Inc. All rights reserved. This material may not be published, broadcast, rewritten, or redistributed.
Christian Petersen
<p>Mascots 'Sparky' of the Arizona State Sun Devils and 'wilbur' of the Arizona Wildcats wrestle during the Territorial Cup college football game at Arizona Stadium on November 28, 2014 in Tucson, Arizona. The Wildcats defeated the Sun Devils 42-35 to win the PAC-12 south championship. (Getty Images)</p>

A brewery on Mill Avenue near Arizona State University campus made waves with both ASU and Arizona Wildcats fans after the brewery apparently agreed to, and then backed out of, a UA event scheduled for later this month.

Despite reaching an initial agreement with UA, Pedal Haus Brewery on Mill Avenue (less than a mile from ASU campus) decided against holding an Arizona Wildcats Road Tour event at its location on Monday, May 21 following complaints from angry Sun Devil fans. Pedal Haus owner/ASU alum Julian Wright, along with general manager Dan Regan, issued an apology to ASU fans.

On Wednesday's Wildcat Country podcast on ABC15 and 1580 The Fanatic, we got UA's side of the story.

-A contact familiar with Valley restaurant owners recommended UA reach out to Pedal Haus about holding its Road Tour event at that location.

-UA's athletics department reached out to the Pedal Haus events manager via email Monday. They reached a verbal agreement to hold the Road Tour event at Pedal Haus on May 21, at which point UA began to promote the event via email and on social media channels.

-The following morning, UA athletics received a call from one of Pedal Haus' owners, who said he was unaware the event was UA-related until it was advertised on social media. He said having a UA event at Pedal Haus would run contradictory to its numerous ASU promotions, as well as its proximity to the school. He apologized for the misunderstanding and provided UA with contacts for other possible venues in the Valley.

-Within an hour of that conversation, UA secured its new location for the May 21 event: Social Tap in Scottsdale.

Dean's source said UA's goal wasn't to anger ASU fans or "invade" Sun Devil territory, but to hold the event in as central a location as possible within the East Valley, as a large number of Wildcat alums live in the Tempe-Scottsdale area. UA held a Road Tour event at Culinary Dropout in Tempe each of the last two years.

In any event: Wildcat fans can click here to RSVP for the Road Tour stop on May 21, which will feature appearances from football coach Kevin Sumlin and several other UA head coaches. Athletic director Dave Heeke will also be in attendance.