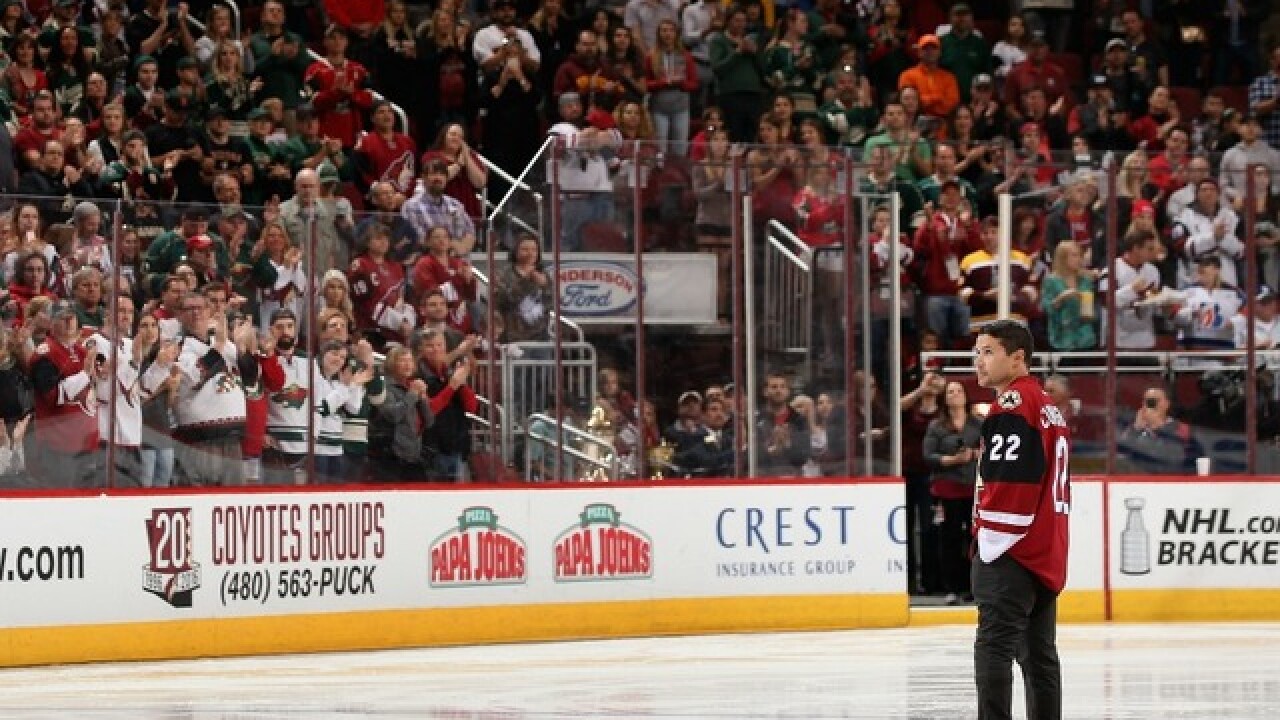 Copyright 2018 Scripps Media, Inc. All rights reserved. This material may not be published, broadcast, rewritten, or redistributed.
Christian Petersen
<p>Former Tucson Roadrunners captain Craig Cunningham stands on the ice for the ceremonial puck drop before the NHL game between the Arizona Coyotes and the Minnesota Wild at Gila River Arena on April 8, 2017 in Glendale, Arizona. Cunningham suffered cardiac arrest on the ice during warm-ups before a Nov. 19 game with the Roadrunners, the Coyotes AHL affiliate. (Getty Images)</p>

On Nov. 19, 2016, Craig Cunningham's pro hockey career came to an abrupt and frightening end -- but thanks to some quick thinking from doctors and EMTs, his life did not.

In the time since he went into cardiac arrest before a Tucson Roadrunners game, Cunningham has made it his mission to ensure others don't suffer the same fate, or worse -- and his brother is all in on helping him reach that goal.

On Friday, Cunningham's older brother Ryan will begin a 1,650-mile bike ride from his home in Castlegar, British Columbia to Tucson, all in an effort to raise money for the Craig Cunningham All Heart Foundation.  Craig created the foundation alongside Dr. Zain Khalpey, the doctor at The University of Arizona's Sarver Heart Center who saved his life.

Ryan's goal is to raise $50,000 during his journey, and he has created a GoFundMe page. The Arizona Coyotes and Roadrunners have already agreed to donate $5,000 apiece.

"I can’t even tell you in words what it means to me," Craig Cunningham said about his brother's upcoming journey. "It’s a huge thing he’ll do where we’ll not only promote the All Heart Foundation but the cause and the things that we're developing to try to change the game a little bit."

"I think the second part of it is just to show the resiliency of the human body and what it’s capable of when you do things the right way."

A British Columbia native, Cunningham played for the Roadrunners and Coyotes from 2014-16. But before that game at Tucson Convention Center nearly two years ago, Cunningham's heart stopped beating, and it wouldn't beat again for 83 minutes. Medics cut away Cunningham's jersey and performed chest compressions before moving him off the ice and transporting him to the hospital.

Cunningham faced months of recovery time in Tucson, and he ultimately had his lower left leg amputated after developing an infection. On March 31, 2017,  he skated for the first time since the incident, and he rejoined the Coyotes as a scout less than two months later.

But Ryan Cunningham knows the All Heart Foundation is the most important thing his little brother does with his time.

“When I told Craig what I wanted to do with this, there was a lot of time between then and when I was going to do it,” Ryan told The Province in Vancouver. “It’s hard. You want to try to do something that attempts to represent the magnitude of what he’s been through with this. You want to do justice to the spirit that he’s shown."

Ryan Cunningham prepares for the ride of his life for brother Craig https://t.co/uTG2vtKToW

Per The Province, Ryan, who works at a metals and mining company was a mountain biker in his youth. He has trained for this bike ride for over three months, and his fianceé will follow him in a support vehicle throughout his two-week journey. Craig said he'll join Ryan at some point along the way, as well.

"I think I might fly out to Salt Lake City and meet him out there," he said. "We'll drive the last little bit and kind of support them and be there and witness his incredible journey.

"(The heat) shouldn’t be too bad until he gets into Salt Lake City or that Utah border area. I’m not concerned about him. He’s kind of got that warrior's mentality. I just hope he manages the heat and the strain on his body."

By the looks of it, Ryan will have no problem meeting his $50,000 goal: As of Wednesday night, nearly $20,000 had already been donated to the GoFundMe campaign. Add in the Coyotes' and Roadrunners' pledges, and the Cunninghams are already over halfway there, even before Ryan's journey has even begun.

"I think he knows how close to my heart, no pun intended, cardiac screening is," Craig said of his brother. "I think he saw what I went through and saw, for lack of a better term, how much of a s*** show it was for me ... I was one of a million, and unfortunately, other people don’t end up with the same outcome as me.

"It means a lot. It’s probably next to Dr. Khalpey saving my life, the second biggest thing that anybody has done for me in my life."