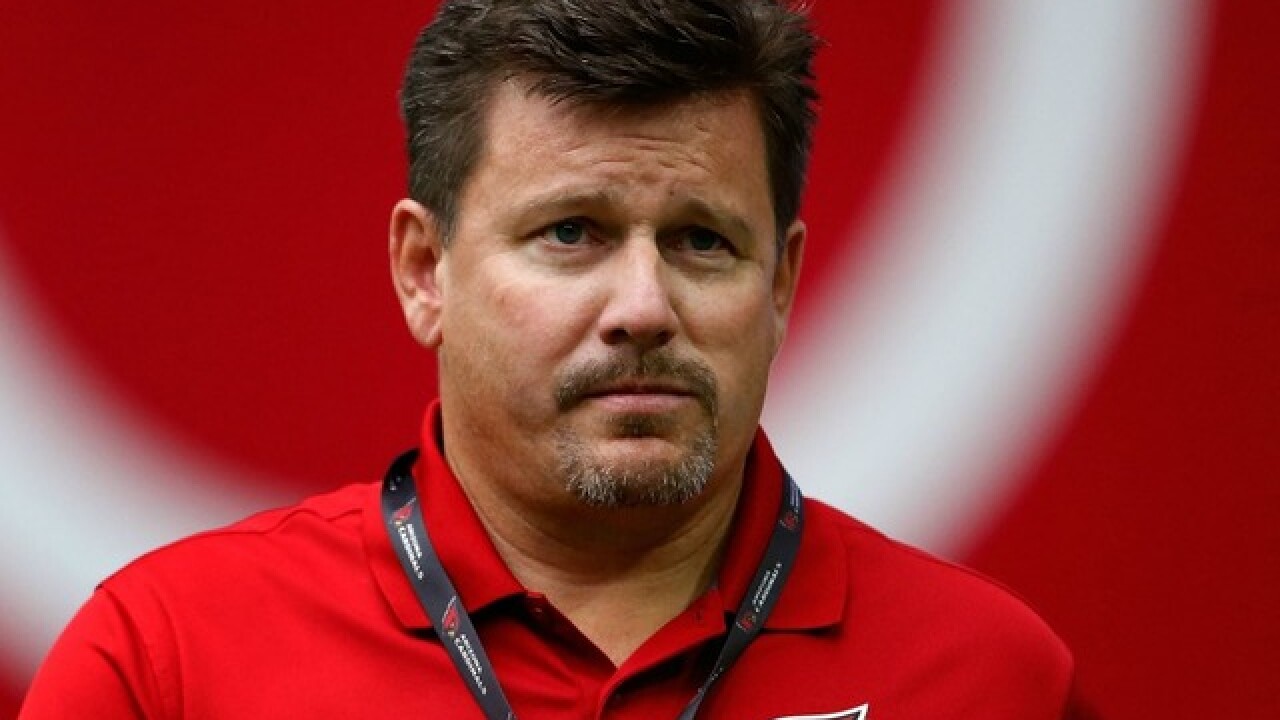 Arizona Cardinals president Michael Bidwill and many of his former classmates wrote a letter of support to the U.S. Senate for friend and ex-classmate Brett Kavanaugh, who was nominated to the U.S. Supreme Court by President Trump on Monday night.

That endorsement was met with mixed reactions from fans and media, especially after the Cardinals wrote a web story about Bidwill's letter and used the team's official social media accounts to publicize it.

On Tuesday morning, Bidwill went on KFYI, a Valley-based conservative talk radio station, to defend his letter and support of his former Georgetown Prep classmate.

"He’s an experienced jurist. There’s nobody that’s more qualified. But for me, it’s really not about the politics; it’s 100 percent about he is just a great person, and I want people to know that, and all of our classmates that went to school with him feel the same way," Bidwill, a former lawyer and federal prosecutor, told KFYI host Mike Broomhead.

"We all come from different political backgrounds, socio-economic backgrounds -- all sorts of things, and we all have different views. And not all of us agree with all of his opinions. I haven’t even read all of his opinions. I’m just saying, I think he’s a man of high character, high integrity, and he’s going to be an independent judge that calls the balls and strikes as he sees fit."

Bidwill, the son of Cardinals owner Bill Bidwill, noted he and Kavanaugh have known each other since they were 16 years old. They played high-school football together, and he attended Kavanaugh's wedding.

"We’ve grown up in life together," Bidwill said. "He’s a brilliant, brilliant lawyer and we knew something was special and that he was going to do something great in life. I’ve known him just as a person of high integrity, excellence and independence."

Some media members have said Bidwill's endorsement of Trump's pick is hypocritical, especially after the NFL enforced a new rule requiring players to stand during the national anthem or face fines.

"Did he not stop to recognize the bald hypocrisy of an NFL owner dragging his team into a charged political debate less than two months after the league muzzled player protests during the national anthem because, as Houston Texans owner Bob McNair said, 'Our playing fields — that’s not the place for political statements,'" USA Today's Nancy Armour wrote of Bidwill's letter.

ProFootballTalk's Michael David Smith was critical of Bidwill's decision to discuss his letter on KFYI.

"As President Trump continues to blast the NFL over its national anthem policy and boast that he has helped bring down the league’s television ratings, NFL owners continue to support Trump anyway," Smith wrote. "Bidwill attempted to portray his advocacy of Kavanaugh as non-political, but Bidwill obviously knew going in that he’d have a friendly interviewer in Broomhead, a Trump supporter who said before the interview that criticism of Bidwill getting involved in politics is 'idiocy.'"

During the interview, Broomhead asked Bidwill whether he has any regrets as to the way he handled the letter of support and the publicizing of it.

"None at all. I think it’s important to speak up," Bidwill said. "People are saying, 'Stick to sports.' We ask our players 20 games a year on game days to restrict their statements. The rest of the days, we want them to be out there getting engaged in the communities just like I am and other owners are."

Bidwill noted he is involved with the NFL's new social justice committee, designed to get players involved in improving communities and implementing social change throughout the country.

"We’re working with our players across the league to get them more involved in changing policy and making America a better place for everything," Bidwill said. "I think any time we can work on something positive and productive rather than bickering and fighting, I think it’s better to do something that’s positive and productive. Certainly when you talk about teams coming together to try to win games, everyone’s working together to work toward one common goal.

"But I also know the state of American politics today. I’m not sure those things are going to change overnight. But hopefully we as a country can start working together and try to really focus on some of the really important issues that America faces."