Arizona Cardinals president Michael Bidwill co-authored a letter of support to the United States Senate on behalf of former high-school classmate Brett Kavanaugh, whom President Trump nominated for the vacant seat on the United States Supreme Court on Monday night.

Bidwill, the son of Cardinals owner Bill Bidwill, attended Georgetown Prep near Washington, D.C. with Kavanaugh and graduated in 1983, per ESPN's Adam Schefter. He joined 11 of his former classmates, including Yankees general manager Brian Cashman, in endorsing Kavanaugh.

"We, his classmates and fellow alumni, are confident that you will conclude what we already have known for approximately 35 years because of his character and intellect: Brett M. Kavanaugh is an excellent jurist who is singularly qualified to be an Associate Justice on the U.S Supreme Court. We respectfully request that you promptly and fully consider his nomination as an Associate Justice to the U.S. Supreme Court," Bidwill and his classmates wrote.

"The purpose of the letter is to talk about Brett as a person. We have known him and known what a brilliant mind he has. He’s eminently qualified," Bidwill told azcardinals.com on Monday night.

“I think now that he’s been selected by the President, he will go through a thorough vetting process and as they go through that process they will learn about the great person we know. He is a man of high character, high intelligence, excellence and independence. We want to speak up and show our support as former classmates and long-time friends.”

Bidwill and his co-authors noted Kavanaugh was a team captain and multi-sport athlete at Georgetown Prep. "We united in our common belief that Judge Brett M. Kavanaugh is a good man, a brilliant jurist, and is eminently qualified to serve as an Associate Justice on the U.S. Supreme Court," the letter read.

The 53-year-old Bidwill was a federal prosecutor in Phoenix before joining the Cardinals, and he has served as the team's president since 2007. Schefter noted Bidwill organized his former classmates to write the letter. 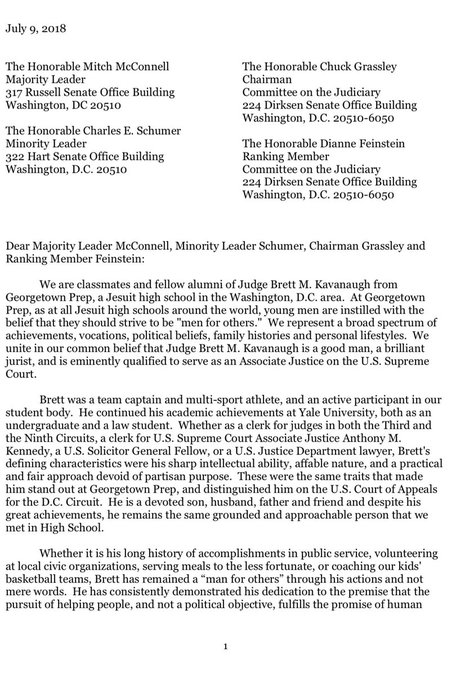 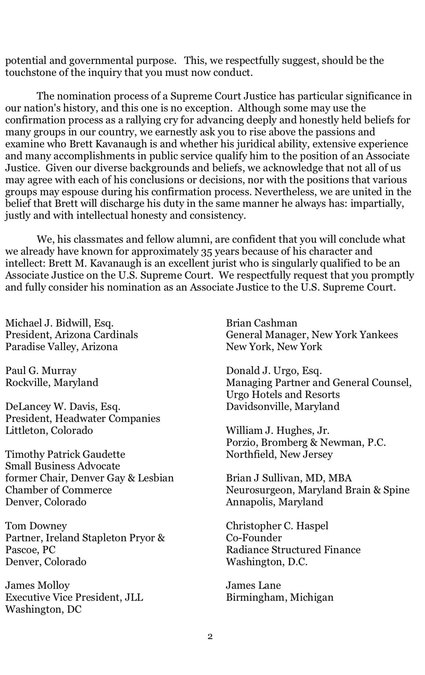