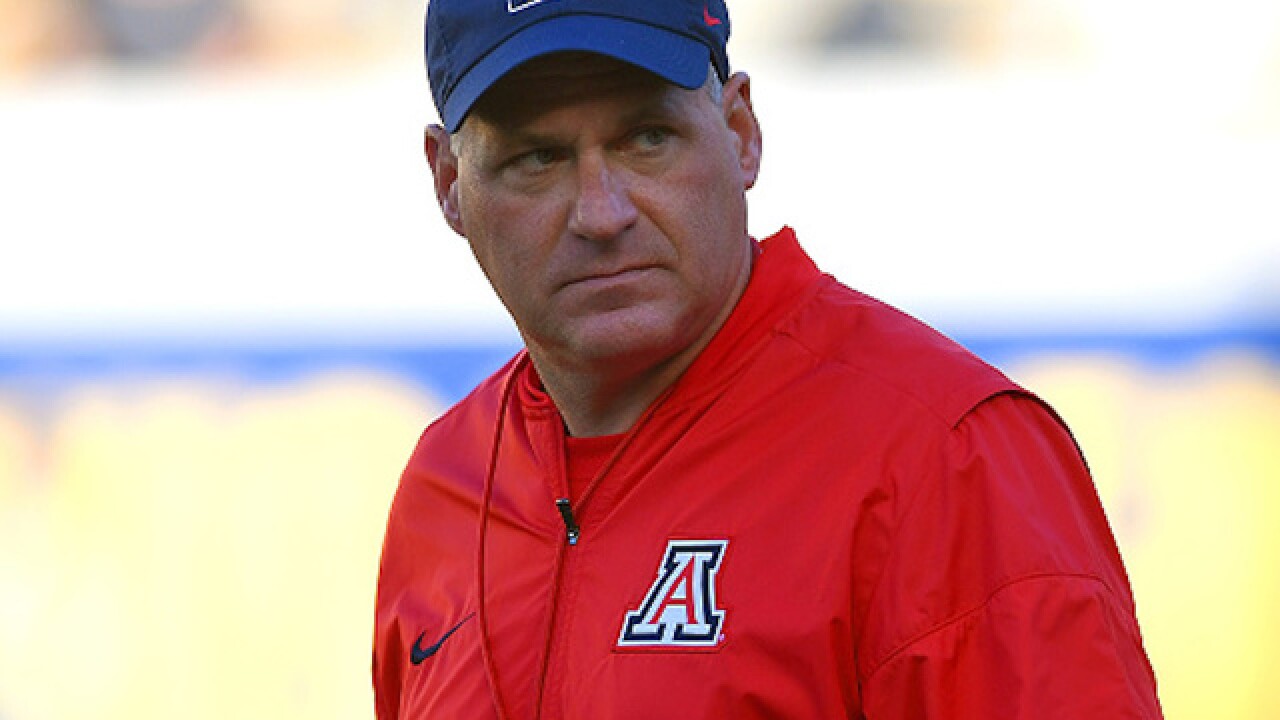 Copyright 2018 Scripps Media, Inc. All rights reserved. This material may not be published, broadcast, rewritten, or redistributed.
Thearon W. Henderson
<p>BERKELEY, CA - OCTOBER 21: Head coach Rich Rodriguez of the Arizona Wildcats looks on while his team warms up prior to the start of an NCAA football game against the California Golden Bears at California Memorial Stadium on October 21, 2017 in Berkeley, California. (Photo by Thearon W. Henderson/Getty Images)</p>

In the letter, Rodriguez's attorney accused Melissa Wilhelmsen, a former administrative assistant to Rodriguez at UA, along with her husband and attorney, of creating a "scheme with the purposes of extorting $7.5 million from Coach Rodriguez, and enriching themselves even at the cost of destroying Coach Rodriguez's and his families lives."

The letter is a response to a notice of claim filed in late December on behalf of Wilhelmsen, who is seeking $7.5 million from Rodriguez, alleging a number of incidents of harassment from 2011-17. The claim was filed one day before UA was set to play Purdue in the Foster Farms Bowl in Santa Clara, California.

"Demanding the payment the day before the Bowl Game was vicious, cut-throat, and explainable only as the ultimate threat to extort Coach and Mrs. Rodriguez of the $7.5 million," Rodriguez's attorney wrote in the response letter. "They relied on Coach Rodriguez paying them their ransom money to avoid the public uproar their claims would cause on the day of the Bowl Game.

"But throughout this ordeal and through receiving that last extortion threat, Coach Rodriguez has fought back. He took the polygraph test, reported the extortion attempt to the U.S. Attorney and F.B.I., cooperated fully with the nearly-two-month University investigation into her complaints that exonerated him, and he'll continue to fight to expose her claims for the fabrications they are."

The letter claims Wilhelmsen's attorney contacted Rodriguez's attorneys twice in November seeking a seven-figure payout in exchange for Wilhemsen's silence about an extramarital affair Rodriguez had. Rodriguez admitted to the affair but denied Wilhelmsen's accusations in a tweet after the notice of claim was filed.

Wilhelmsen and her husband filed a separate claim with the Arizona Board of Regents In January, in which they're seeking $8.5 million for "slander, defamation and false light, invasion of privacy and intentional infliction of emotional distress" stemming from Rodriguez and his wife's conduct after his firing, according to the Arizona Daily Star. The separate claim lists Rodriguez, as well as his wife and The University of Arizona, as defendants, according to the Star.

Rodriguez was Arizona's head football coach from 2012-17. He compiled a 43-35 overall record and led the Wildcats to the 2014 Pac-12 South championship.