ASU has multiple paths for winning the Pac-12 South championship 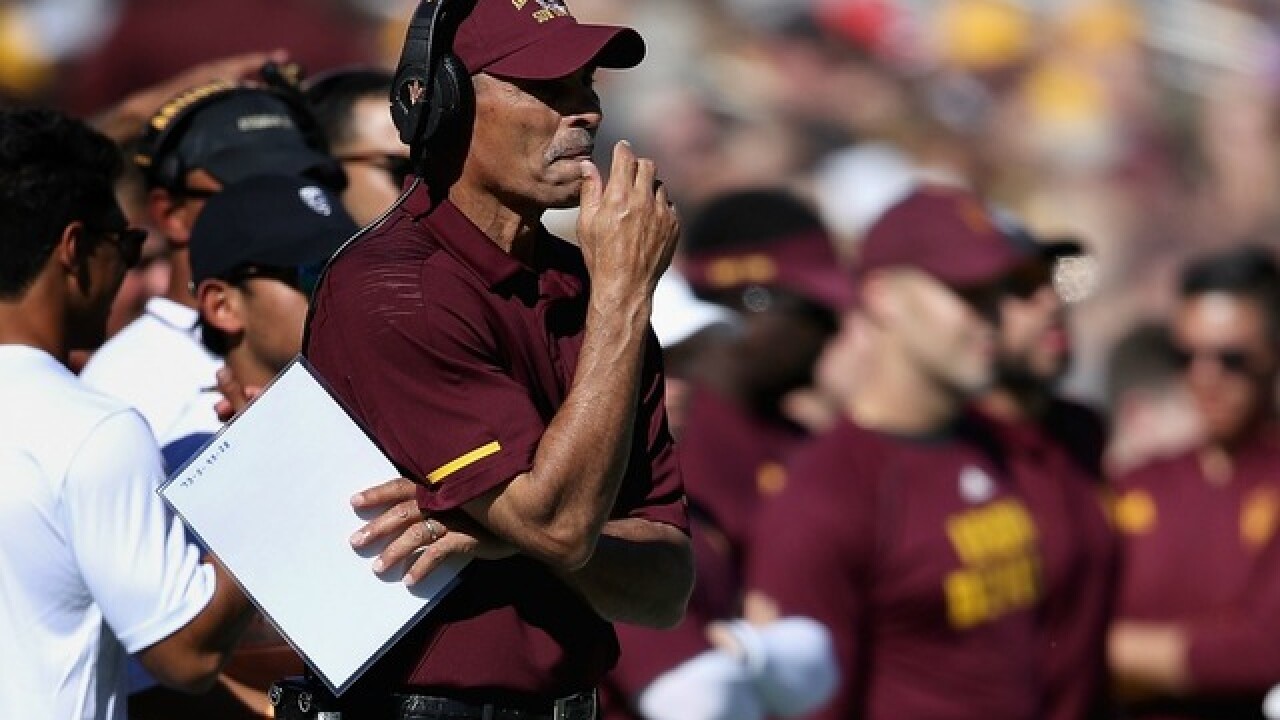 Copyright 2018 Scripps Media, Inc. All rights reserved. This material may not be published, broadcast, rewritten, or redistributed.
Christian Petersen
<p>Head coach Herm Edwards of the Arizona State Sun Devils watches from the sidelines during the first half of the college football game against the Utah Utes at Sun Devil Stadium on November 3, 2018 in Tempe, Arizona. (Getty Images)</p>

In late October, Herm Edwards' Sun Devils were just 1-3 in the Pac-12, and they appeared they might miss out on a bowl game altogether.

What a difference three weeks makes.

The Devils defeated UCLA on Saturday to win their third straight game and secure a bowl bid in Edwards' first year as head coach. They are now 6-4 overall and 4-3 in the Pac-12 -- and with two more victories, they will compete for a Pac-12 championship for the first time in five years.

Heading into their final two games of the regular season, ASU is the only team in the Pac-12 South division that controls its own destiny for the division title. The Devils' final two games will be on the road: at Oregon on Saturday, and at archrival Arizona the following weekend.

The easiest way for the Devils to win the South is simply to win both of those games. If they do, they will be division champs and compete against either Washington or Washington State in the Pac-12 Championship game in Santa Clara, California on Nov. 30, with a likely trip to the Rose Bowl on the line.

But that's not ASU's only possible path to a division title. There are two other ways in which the Sun Devils can become Pac-12 South champs, both of which include a Utah loss to Colorado:

-If ASU beats Oregon, Utah loses at Colorado and Arizona loses at No. 8 Washington State on Saturday, the Devils will clinch the division title even before they take on the Wildcats in the Territorial Cup game, because the Sun Devils would win any tiebreakers in that scenario.

-If Utah loses to Colorado but ASU loses to Oregon and Arizona upsets Washington State, the Sun Devils can still become South champs with a win over the Wildcats in Tucson on Nov. 24.

If Utah beats Colorado, ASU's only path to the South title will be victories over the Ducks and Wildcats. If Utah wins Saturday and ASU loses one of its last two games, the Utes will be South champs for the first time in school history.

UA also has a path to the South title. Wins over Washington State and ASU, as well as a Colorado win over Utah, would give Kevin Sumlin's Wildcats their first division title since 2014.

The other three teams in the Pac-12 South -- Colorado, UCLA and defending-champ USC -- have all been eliminated from title contention.

ASU won the Pac-12 South title in 2013, Todd Graham's second season as head coach. The Sun Devils hosted the Pac-12 Championship game that year but fell to Stanford 38-14, missing out on what would have been their third-ever Rose Bowl appearance.

The Devils' path to a South title won't be easy. Oregon is 5-1 at home this season, while ASU is just 1-3 away from Tempe. And the home team has won each of the last four Territorial Cup contests; the Sun Devils haven't won in Tucson since 2012. The Devils, however, did defeat UA and Oregon last season.

ASU's game at Oregon will begin at 8:30 p.m. Arizona time on Saturday and will be televised on Pac-12 Network. Arizona's game at Washington State also begins at 8:30 and will be broadcast on ESPN.

Utah's matchup at Colorado will kick off at 11:30 a.m. on Pac-12 Network. If the Utes lose that game, both ASU and Arizona will control their own destinies in the division going into their games that evening.